It’s been a few weeks now since I put the Signature Campers' Premium to the test, and to be honest, I’ve kinda been kicking this can down the road a little. Not because of any faults with the trailer, more just me trying to get my head around it. The pros. The cons. The things I’d change. And the people it’d suit. There’s been a pretty big shift in the way people use camper trailers over the past few years. They’re constantly expanding. Getting bigger. Heavier. Fancier. With more accessories than you’d ever thought possible. The end result is they end up distracting you from the actual camping experience, at least in my opinion.

If you’re on the road for six months, a 20,000W inverter might be great, but if you’re ducking off for a weekend here and there are you doing it to stare at your laptop after fighting with 40 spreader bars? Or are you doing it to get off the beaten track, to places the Average Joe can’t reach, where you can enjoy the wonder of the Australian bush without all the hustle and bustle of life coming along for the trip?

The Signature has had me stumped because there isn’t really anything to bench mark it against. Sure, there are trailers that offer a similar stripped back camping experience. But they’re three times the price. And there’s campers for a similar price, but they’re often a cacophony of poorly thought out features all designed to lure unsuspecting buyers. They have more shit, so they must be better… right? The Premium didn’t really fit into either category, and that's why I immediately loved it. 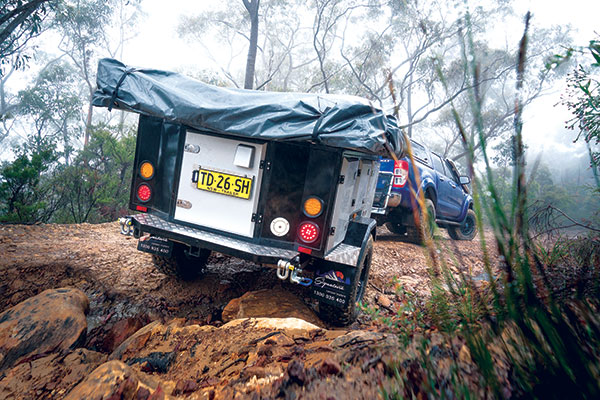 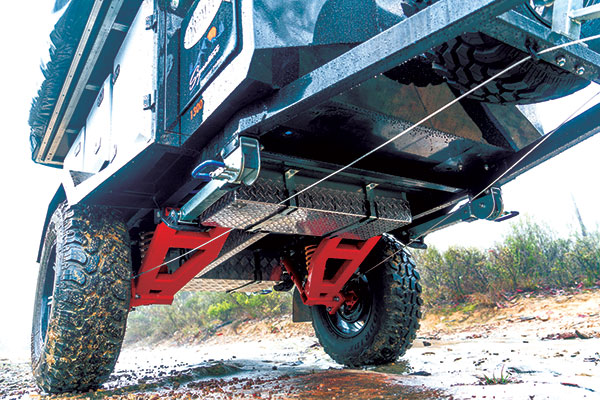 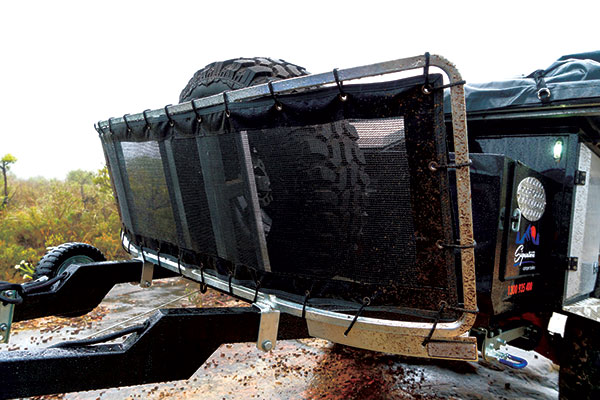 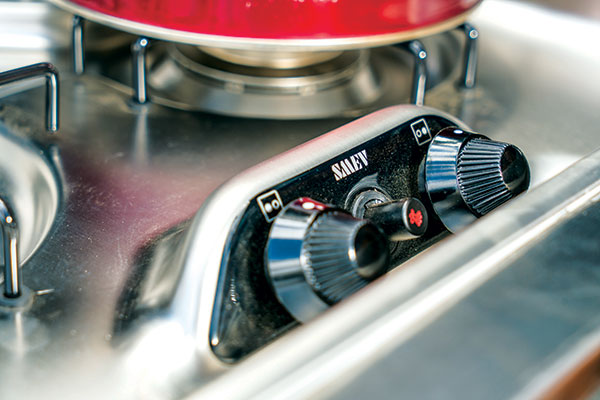 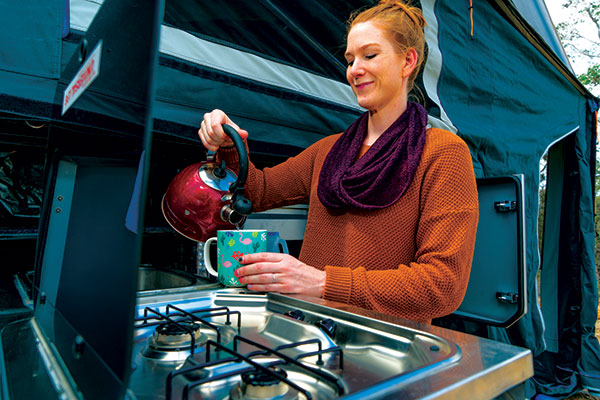 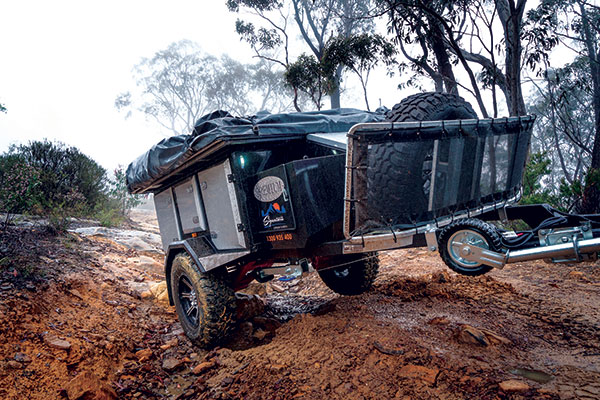 To get to the bottom of what makes the Signature something out of the ordinary I had to put it in extraordinary situations. I waited for the wildest, wettest weekend I could find, hitched the poly-block coupling to the back of my Ranger, aired down the 31in mud-tyres and headed to the hills. I did this before opening a single door, or zipping a single zip. At under 1000kg, with a ball weight of 80kg, and an overall length a full metre-and-a-half shorter than most hard floor campers, the Premium is almost purpose built for hardcore 4x4 trips, so it was on one of these that I put it to the test.

The frame is high-clearance, with a handy kick-up at the front of the chassis allowing wiring to run internally (new models will have bracing on this joint), the independent suspension runs quality Aussie made Pedders shocks, and the whole lot comes sporting a set of aggressive mud terrain tyres. Combine that with checkerplate outer edges and a narrow profile and the Premium is the perfect footprint for lugging through difficult terrain. With the Ranger in first gear low-range, the rear locker engaged, and pressures dropped it was almost irrelevant the camper was even hitched. Pick a line, point the tiller where you wanted to go, ease off the brakes and the whole package effortlessly crawled through the slippery sandstone course before me with the camper happily doing as it was told.

There’s a pretty stout rear step protecting the tail end of the camper from wayward rock-ledges in steep terrain, with a pair of recovery shackles either side if you run out of talent. While poly-blocks are noisy and a little goofy to attach they work well offroad allowing the camper to slowly step in and out of ruts without unsettling the tow-tug along the way.

This model, the Premium, runs a larger tent than the entry level Deluxe, so branches and deep embankments need to be watched cautiously as the tent is the most vulnerable part of the camper. But for beach work, fire trails, and most tough offroad situations it shouldn’t give you too much grief.

HOME AWAY FROM HOME

If you’re expecting a double-articulating twin fold design, the Premium might not be your cup of tea (Signature do offer a traditional forward fold if that’s your bag). Set up is relatively straight forward though. Drop the four stabiliser legs into place, zip off the bag then find somewhere to store it. Then set to work on the tent. The whole arrangement is reminiscent of the classic roof top tent. Grab a handful of canvas at the rear and pull it over. Once the floor is pegged out square you can climb inside, put the ladder into place and after a few adjustments have a reasonably comfortable 80mm foam mattress to lay your head down on as well as ample standing room on the ground level for changing, dry space out of the weather, or setting up a couple of kid’s stretchers. There’s plenty of room inside the bag too so you can keep blankets and pillows up top which drastically cuts down set up times. All up the whole affair took less than 10 minutes. Access to the fridge slide is through the main tent which is handy for midnight snacks, but does mean inside is quite cosy, when you’re all set up. It’d be great to see a system that holds the ladder more securely, but as this is essentially the first run of these campers, I’d expect the guys from Signature to sort out niggling issues as the product line evolves.

The kitchen arrangement is neat and easy to use. A classic stainless steel slide-out unit pulls out of the front storage box with the two-burner SMEV hooking directly to the nearby 9kg gas bottle. Bench space is low, but hey, this is camping. You’ve got a few storage boxes easily accessible with a pull-out drawer under the cooker as well as over the wheels on both sides. The passenger side rearmost compartment houses the Bluetooth stereo, while the matching compartment on the driver’s side stores the electronic control system as well as two 100Ah AGM batteries.

Storage is light on so don’t expect to find neat spaces for your luggage. Think of the Premium as a camping trailer rather than a camper trailer and things will start to make sense. Besides, what’s so bad with storing a bag or two in the tow-tug?

I mentioned before this is the first camper of its kind Signature have put together, and that’s not an exaggeration. The team at Signature are genuine blokes who care about their products and want to bring something unique to the market, but it will take them a little while to get the bugs ironed out. A few things stood out in our testing. The first, is many of the seals catch on drawers and slides as they’re operated which will quickly tear and allow dust and water ingress. A gas strut will hold the doors out of the way enough to not catch. Easy fix.

There was no way to keep inside the tent sealed if you want to access the fridge, but the guys at Signature inform us they have this addressed in the new model.

I’d love to see more bracing on the 'Z' in the chassis. With minimal weight on it a butt-weld won’t be an issue, but if you beat it like it owes you money a few fish plates would inspire a lot more confidence. Lastly are just the details that only come with time. The door latches on my test unit were out of adjustment by no more than a few mm, but the result was notchy operation, and a tendency to pop open if bounced hard enough.

Now it might sound like a pretty extensive list, but it’s far from it. A few easily fixed issues is no small feat for their first shot out of the gate, and when you consider it’s their demo-model with countless punters hands all over it I’d be more surprised if there wasn’t at least a few niggling issues.

WHO IT'S SUITED FOR

The whole schtick of the Premium is it’s a light-weight compact camper. It doesn’t have a built-in lounge suite, and it doesn’t offer an extensive floor plan. It’s the perfect arrangement for one or two people who want an adventurous trailer to get them off the beaten path without the worry of lugging around a tonne and a half of camper behind them. If your idea of a camping trip is taking on the Old Tele Track, winding your way through Ngkala Rocks, or criss crossing through the Victorian High Country without ditching the camper this should be a big stand out.

While there are upgrade options in the Signature range to larger campers, if you’re looking for that fair-dinkum adventurous camper with more room, you can still expand the Premium to suit your needs. The ground level of the tent is compact but there is room to fit a couple of kid’s cots relatively easily. From here you can attach the included enclosed annexe which stretches the full length of the tent allowing plenty of space for additional kid’s beds. There is a privacy screen for the main sleeping area too.

The age-old saying is you get what you pay for. Sometimes it’s an insult, other times it’s a compliment. The Signature Premium falls into the latter category. There are absolutely a few rough edges, although they’re easily fixed, and when the camper is close to half the price of its nearest competitor (also imported) it’s pretty easy to overlook a catching seal or an entry level component here or there. You do want for space, both inside the tent as well as storage and prep area. But this isn’t a Tardis. If you want more stuff, you get more weight, and more size, and that goes against the very things that make the Premium a winner.

If you’re on the hunt for the offroad Taj Mahal, Signature have other models that’ll be right up your alley, but if you’re after a serious offroader with enough creature comforts to make nights in the bush more enjoyable, and don’t want to pay through the nose to get it, the Premium offers one hell of a package.

Check out the full review in issue #121 of Camper Trailer Australia magazine. Subscribe today for all the latest camper trailer news, reviews and travel inspiration.

To buy your own camper, head to TradeRVs.