I’m not too proud to admit I’ve surrendered to the Conqueror – again. The rugged little UEV-345 is military tough. It wears its camouflage uniform nobly yet, like many soldiers, it has a personable side with great strength of character; the sort of friend you need when the going gets tough.

I was introduced to the Conqueror UEV-345 in 2013 and gave it a glowing report, and when it competed in CTA’s Offroad Camper of The Year that year, it took the title for the best camper in its class! Competition judge and offroad expert Nick Mannell said, “The Conqueror UEV-345’s light Tare and narrow profile make it one of the best offroad performers in our line-up.” Mike Pavey added “the storage is hard to beat,” and CTA’s own Stuart Jones described it as, “a great little escape machine”.

Whilst some things have changed, the principles remain. This is a go-anywhere, rugged, lightweight camper with exceptional offroad qualities, terrific storage, no-fuss design, easy erection, a camper-king-size bed, huge water storage and a terrific array of functional accessories that each have their own place, for easy and comfortable camping. 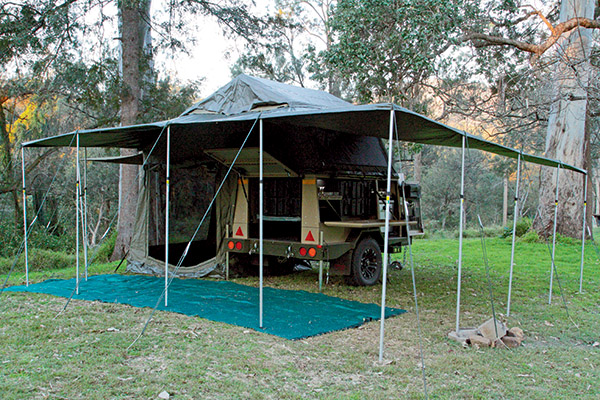 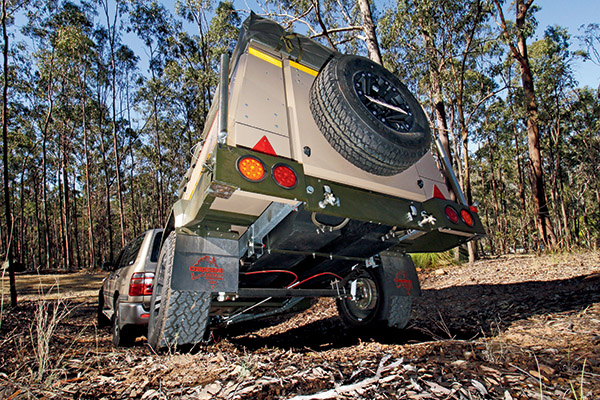 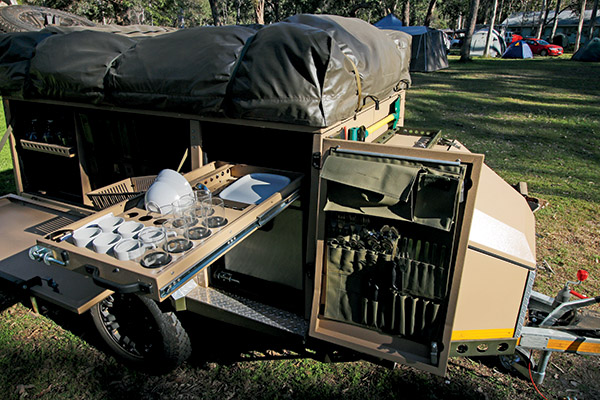 The standard UEV-345 is one of the smallest campers offered by the South African brand. It receives minor alterations locally for Australian regulations but needs little else. From bottom to top, this is a very strong little battler. It rides on an Al-Ko undercarriage with a 50x50mm solid axle and seven-leaf slipper springs cushioned by a shock absorber either side and 10in override brakes activated by a 50mm ball coupling. Conqueror fits 245x70 R16 all-terrain tyres as standard and black alloy mags as an option.

The UEV-345 on review is the standard model and comes with override brakes for those towing with multiple vehicles. My only problems with override brakes are the lack of independent control in steep downhill transits and their increased difficulty reversing in unpassable situations, where you have to disconnect the trailer to recover. Many of us will never get that point – but, then again, you just never know what you will be tempted to try with a good 4WD and tough little trailer. Dedicated offroaders may prefer the Escape upgrade, which gives a new, longer nose box, a DO35 V2 coupling and an axle fitted with 10in electric brakes.

The Conqueror UEV-345 shines offroad. At just 3.7m long and 1.7m wide it’s short and narrow and easily follows your tow vehicle anywhere. The shell is manufactured from 1.6mm powder-coated steel which is riveted and bonded with Sikaflex for strength and flexibility to eliminate fatigue – a similar technique used in aircraft construction. It has a strong underbelly with a hot-dipped galvanised steel chassis culminating with an A-frame drawbar constructed with 100x50x4mm C-channel rails. The light 760kg Tare makes it very attractive for close-quarters maneuverability in offroad conditions. With an ATM of 1500kg, it’s also quite a troop carrier allowing a whopping 740kg of payload but its light 30-40kg (dry) ball weight makes it suitable for towing behind smaller SUVs.

Out front is a solid jockey wheel, which lifts up into the trailer frame and locks securely out of harm’s way. To the rear are jack stands that adjust with a big R clip. I must say, I’m a big, strong sorta bloke and even I found this clamp difficult. When I suggested a push pin and a locking cotter pin, Conqueror took my criticism on board for future improvement. I do love the huge 150L water capacity (two 75L poly tanks) set high into the frame, and think it is great having access to two external taps on the road, but they’re low on the rear bumper, which is a drag point in extreme terrain. It’s a small, easy-to-fix issue but it could leave you without fresh water on a long sojourn.

You will be astounded by the size and construction of all of the hinges and fittings on the Conqueror; they are truly military-grade and the dust and water protection is first-rate, with the large nose box storing the electrics up front.

The electronics package is quite simple but contains some sensible features like a breaker fuse on top of the 100Ah deep cycle battery that’s charged via the Anderson plug and a Mean Well 25A three-stage charger. The digital display for the Adventure Engineering Experia Edition battery management system is above a set of individual switches for the fridge, lights, power, water pump (with filter cartridge) and other accessories and the 12V outlets and dual USB outlet.

Just behind the nose box is a small pack rack complete with six removable tie-down points to secure your loads. Above this is a shovel and axe secured on adjustable racks, whilst a pair of lockable jerry can holders is fixed to either side.

On the driver’s side we find two main compartments. The first door is hinged sideways revealing a canvas cutlery rack (with utensils) attached to the inside door. Up top is a fully compartmentalised drawer with a full set of plates, bowls, mugs and glasses. Below the drawer is the slide mount for the dual zone 90L National Luna stainless steel fridge/freezer that’s purchased as an option – but why wouldn’t you?

One of the things I really like about this little Conqueror (should we call it Napoleon?) is that it also comes complete with eight solid plastic Wolf Pack storage boxes for organising all of your travelling gear like clothes, food and so on. You can access four of them from a driver-side compartment. The second doorway hinges down to become a preparation bench and even has an extendable rack for a pair of plastic wash tubs. There’s yet another tray full of crockery on top and even a minibar!

Around the back the surprises keep coming. There’s a very strong rear bumper bar with recessed LED lights, reflectors and a spare wheel mounted with a detachable fire grate for genuine barbecue cooking. The lid swings upward on gas struts to reveal the other four Wolf Pack ammo boxes, a rack for the portable stainless steel/aluminium table as well as a large storage compartment for bulky items like portable seats – and my fishing gear. There’s even a well camouflaged pole storage container in the middle of the bumper bar.

The kerb-side doorways basically replicate those on the driver side and the cubby holes all provide an amazing amount of storage for the size of the camper. In fact, it’s an amazing amount of storage for any size camper! The front door has an inner canvas multi-pocket container and there’s a further storage area big enough for a portable hot water system, generator and more. The second door also pivots down becoming bench space and reveals an array of pigeon-hole storage and a pair of utility drawers to the rear. Much of this storage is accessible from both inside and out of the camper. The only thing missing on the standard package is a portable cooker; if you’re a keen camper, I’m sure you’ll work it out, otherwise you can always upgrade to the Escape.

We found a lovely campsite out at the Bigriggen Park at Rathdowney, south-west of Brisbane. It’s not exactly the place for tough offroad adventure, but we found plenty of rough and tumble to give the little soldier a run. While I got busy setting up the campfire, Conqueror’s Thony Miller assembled it for overnight. Thony has experienced a full career in the Australian Defence Force and finds working for Conqueror satisfying and familiar. He had it set up in a blink of an eye, with the folding softfloor tent unzipped and erected in minutes.

Conqueror uses an 8oz military grade rip-stop canvas which is lightweight but very strong and weatherproof. It pops open easily revealing a huge, 2.1x2.1m king-size bed up top with tonnes of headroom and a spacious 2.1x2.1m sewn-in PVC floor. There’s a nifty little trick to folding the bed extension over for full bed width, which can be done from floor level with the detachable aluminium ladder.

A tropical roof pops up automatically and some nifty awnings on the windows operate with pull cords from inside. We put up the entire L-shaped awning to fully cover the living space. I was glad we had, as the dew fell heavily overnight. The awning comes complete with Conqueror’s own spring steel tent pegs and takes a further 10-15 minutes to assemble from scratch. Just watch your head coming into the tent after dark, as the bed extension is around head height as you enter the doorway – as I found out the hard way. You can tilt out of the way during the day.

For such a small trailer you will be amazed at the size of the tent, the king-size bed, the accessories, the storage and capabilities of the UEV-345. The package comes with two portable LED strip lights and three internal lights, touch up paint, cups and crockery for six people and even a fire extinguisher.

We packed up early after a really good night’s sleep. While parts of the tent were damp from condensation under the PVC, you can pin it up off the ground to dry before the final fold-over. It’s these simple little things that make life easy, saving you from unfolding the camper to dry it at home.

Although you can have electric brakes, a hot water system and more electrics with the UEV-345 Escape option, I’m inclined to adopt the KISS principle in the packaging of this tough little soldier.

This military-grade rig packs is a real compact hero with the capacity of many trailers more than twice its weight.