After identifying the need for a dead-simple camper trailer that was quick to set-up and pack with a modicum of comfort, Glenn Torrens launched his own range of camper trailers, named GT Campers.

Rather than build a trailer body from scratch, Glenn opted to convert ute tailgates instead. And when the current generation Toyota HiLux ute really hit its stride as one of Australia’s favourites, the budding entrepreneur knew he’d found his maiden base rig.

Glenn’s first conversion included fitting a fridge-cum-storage box in the front and placing the tailgate on a basic chassis, enjoying the convenience of having paint, tailgate and tail lights supplied. Realising his first two prototypes, Glenn then mustered the confidence to tamper with his own HiLux ute. 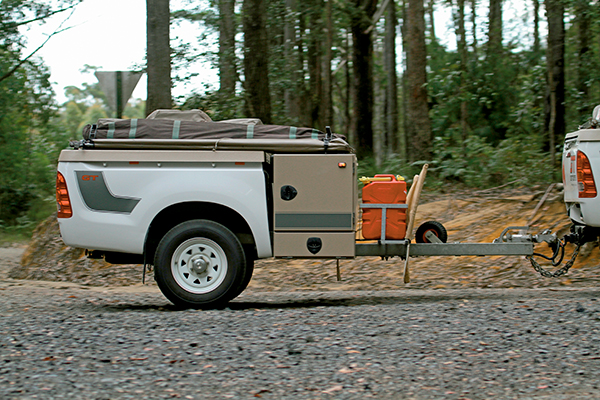 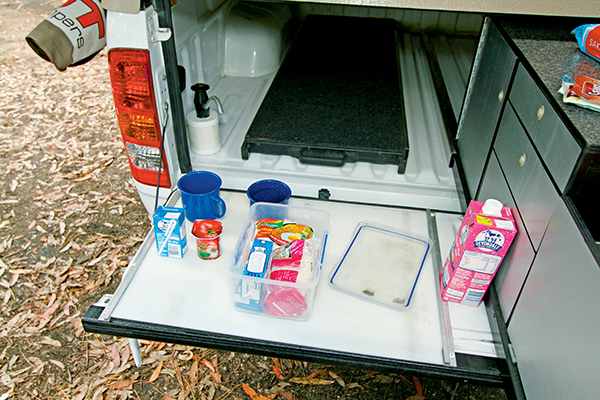 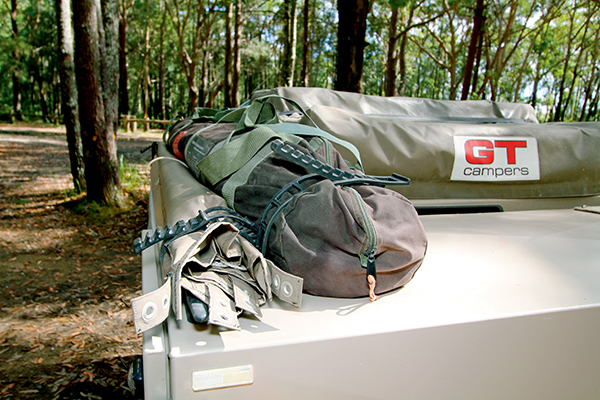 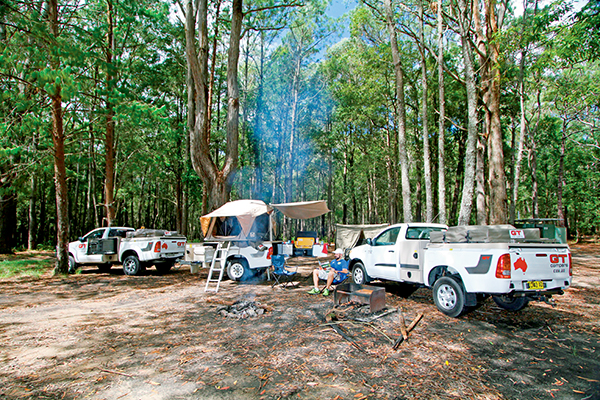 The GT Campers off-road touring trailer tows excellently and efficiently, with not one iota of sideways swing or unwanted movement. The brakes are 10in cable-operated override drum and the rims are steel Sunraysia style.

Glenn uses a Hyland hitch up front because it functions well with a 50mm ball. The jockey wheel is mounted out of harm’s way on the inside of the drawbar with no parts protruding when folded over.

The full width stoneguard is straight to keep rampant stones away from oncoming traffic and is covered with in a UV stable, double thickness shadecloth that’s tough, inexpensive and easily replaced. It is loose so that stones tend to hit it and just drop. On the rear face is a pocket which is handy for carrying out garbage or other light items.

Under the guard are two mud flaps, the largest he could find at the time, but he’s since found a wider version which he’ll fit to new campers. Behind the line of the front flaps is a third mud flap, covering the gap between the two front flaps, to fully protect the underside of the camper.

Behind the stoneguard is a simple aluminium rack and space for jerry cans and gas bottles. The standard fitout is for one 2kg gas bottle and one jerry can holder but second fittings for either or both are an option, as is a bike rack.

All conversions are fitted with Drifta kitchens finished either in natural ply or laminate, though Glenn believes the former is better equipped to survive knocks on the side of the road.

The kitchen on the review camper slid out on two stainless steel C-channels and was counter-balanced over the rear. I’d personally drop the single stabiliser leg when unhooked from the tow vehicle, as the weight may just lift the jockey wheel clear of the ground.

The kitchen was of Glenn’s own design, with three drawers, two cupboards and a plastic sink tub on a slide. A standard two or three-burner cooker is available for the allocated space on top. The kitchen is secured into the back of the trailer by a stainless steel tether which you can undo when you feel like cooking away from the camper to, say, alongside a billabong. Of course, removing the kitchen from the trailer also removes it from the water supply.

To keep costs down and to comply with regulations, the gas bottle is carried from the front crossmember and hung on the back of the kitchen to where the gas hose is installed.

The trailer has an 85L tank under the floor, with a manual pump as standard, just inside the tailgate. Optionally, there is an electronic pump and tap, located in the same spot. This, however, leaves little room to get, say, a billy under the spout as demonstrated on the ute, and would be better mounted on a similar plinth used for the manual pump to raise it off the floor.

The tank is located close to the axle centreline, as is the spare wheel, another of Glenn’s design criterion, as he feels mounting spares high up on swing away rear arms impacts handling.

On the tailgate adjacent to the kitchen is a large nylon cutting board that is easily removable for cleaning, and there’s a 12V plug inside for lights or other electronics around the back. Glenn also fitted a carpeted “trundle tray” slide next to the kitchen for easy access to items stored deep inside the trailer.

At $21,590 as seen, it’s competitive with most other campers that offer things like a fridge, though it comes to the table with a lot of unique features.

I would have liked…

Check out the full feature in issue #88 May 2015 of Camper Trailer Australia magazine.