The Rodriguez brothers - John and Ric - got into the camper trailer business because they were convinced they could provide quality and simplicity at affordable prices. With backgrounds in engineering and the auto trade and, as keen offroaders, they brought a number of vital talents to the table when they began designing their own campers.

Their latest model is their fourth design; it is called the Rush and is the unit on review here. It is an elegant hard floor camper that includes some unique ideas and a stylish folded aluminium exterior designed to turn heads at the campground.

The chassis is tough; it is made using 4mm steel, with 12mm hangers for the custom designed independent trailing arm Ultimate suspension system.

"It is all engineer-designed," said John. "And I know it's probably over-engineered - computer tests show it has a five tonne static load capacity - but we wanted it bulletproof. We felt that if the chassis was strong enough we could then save weight with our planned body construction that would compensate for it."

The body is constructed from folded 3mm aluminium that requires no internal frame or support, there are also no sharp edges. Adhesive bonding and Huck rivets are used throughout, as widely used in the aerospace industry, for a smooth polished aluminium exterior.

The hard top has five structural beams that mean you can carry up to 125kg of gear up here, and tie down points are provided. The front storage box is massive at 500x500x1700mm, and is contiguous with the rest of the body.

The tent is made from Indian canvas of a symmetrical design, meaning you get two 2.2x4.4m awnings, one off each side. The standard camper comes with one set of full walls which can be used on either side. These walls include midge-proof screens, a hook and loop fastener for the heavy duty floor, and a PVC draft skirt. A front window cover can fold out over the full drawbar and there is an awning over the full height rear window. The tropical roof is optional.

The tent has a high roof, supported by stainless bows, providing excellent water drainage and minimising heat. It takes about three minutes to set this tent up without the awning.

The camper is opened and closed by a somewhat noisy winch on a drawbar-mounted post. The awning can remain attached when packed up, something we'd recommend because the height of the roof means it can be awkward to attach.

Internally, there's a queen-sized bed with 100mm high density foam mattress, carpeted floor and hard wired LED interior light. The underbed storage is accessed by lifting the bed, and when closed there's plenty of clearance to store items on top of the bed.

The aluminium kitchen is self-supporting and is equipped with a two-burner stove, food grade chopping board over the cutlery box and an electric water pump, all fully plumbed. Water comes from a 65L tank under the rear.

Electrics consist of a single (or two as an option) 55Ah Optima battery, one USB outlet and four 12V outlets (three inside, one outside). There's a Ctek 5A charger, an Anderson plug and a standard 300W inverter (larger units optional). I would have liked to see some 240V outlets.

The spare wheel travels under the front and is lowered by an electric winch. The 9kg gas bottle (you can option to have two 4.5kg if you prefer) and single jerry can holder are on the drawbar. There is no separate stone guard as the tapered tool box fulfils this role.

One of the best points about this camper is that in standard trim it weighs just 660kg, and at $25,990 you get a lot for your money.

With the Rush, the Adrenalin people have produced what they set out to achieve: quality and simplicity at a good price. It is certainly a different design that looks the goods while also offering great value for a hard floor camper - which is probably why they are about to start making them in the USA. 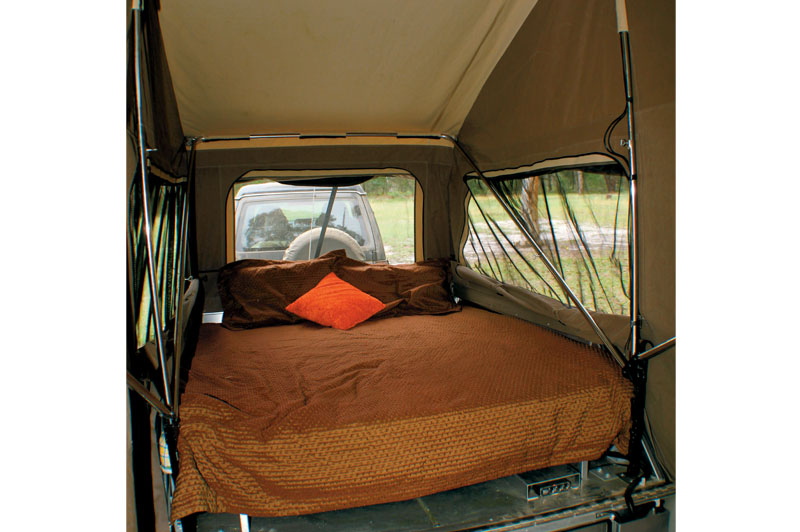