Race to the Cape: Introduction

An adventure of epic proportions with a selection of touring goodies from Mars, Zone and Cub Campers.

The mission was simple: assemble a crew including 4WDs, campers and a caravan, and burn rubber on the way up north to the Australian camping Mecca of Cape York. Over a pint or three it was christened Race to the Cape, and the plan soon evolved into a journey of epic proportions – which is bound to happen with any idea born in a pub. The itinerary quickly became jam-packed, and the next step was to form a cracking team who would be willing to belt up the Bloomfield, rev through river fords and, more importantly, drink mid-strength beer for an extended period of time with minimal complaint.

It was an offer hard to refuse (aside from the beer), and it didn't take long to get the right people on board. We gathered them from all over the country – Melbourne, Sydney, the Blue Mountains, and the Sunshine Coast – and met at our starting point of Cairns. We stocked up on essentials (beer, snacks, and enough toilet paper to equip the MGM Grand), and enjoyed our last night in air-conditioned comfort. We set off, headed for our first stop, Cape Tribulation. Morale was high and the countdown to the first croc and cassowary sighting had started.

The next two weeks stretched out ahead of us, on a red and dusty track. Exactly what we'd encounter on our trip to 'The Tip' was unknown. One thing was for certain though – adventure was on the cards. 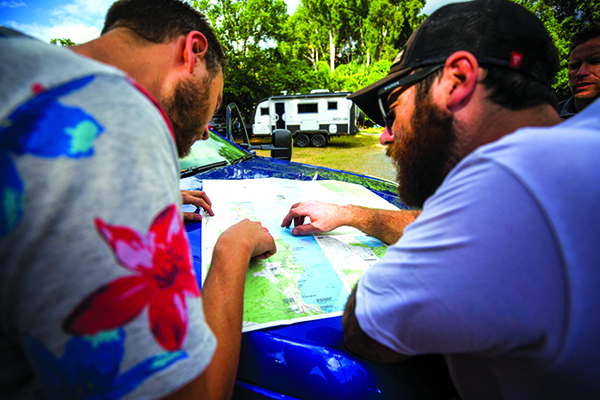 THE WHO’S WHO OF RACE TO THE CAPE

Jack Murphy: Outdoor Editor, photographer and last out of bed — but always smiling

Mars: Lead by Celso, cook of the trip, and backed up by Phil, our hardest worker

Lucky: Lucky, a skinny stray on death's door that the Everetts rescued, who fast became the offsider for Hunter and Nola

Remember being a kid and finding that tree that was a little taller than the others, or a gap you had to jump a little wider than you’ve done before? The solution was always simple: get a friend to give it a crack first so they’re the one with the busted elbow instead of you. Of course, you’ve gotta find a way to convince them.

“Hey Tim, seeing as the Jeep isn’t towing a camper reckon you could race up ahead and suss out any good filming spots?”

And so the Recon' Wrangler was born. In the hot seat was Caravan World editor and man giant, Tim. He’d been with Adventures for around 20 minutes before he was off to the Cape and was in charge of punching out a bunch of articles and presenting a few videos with his unmistakable Kiwi drawl. He’s a mad keen fisho and bombs around Victorian tracks in his tidy HZJ105 Cruiser so was always the first to come running with a set of Maxtrax or a winch line when needed.

Next to Tim was Camper and Outdoor deputy editor, Nat. While she’s new to the camper trailer world, she’s no stranger to the outdoors. You’re more likely to find her six hours down a bush-walking track than winding up a camper at the local grounds, but she adapted great to the huge drive days and sheer amount of ground covered. Her radio banter and helpful attitude made her a worthy addition to the trip indeed.

I’ll be the first to admit when it comes to huge kays in remote areas, a Land Rover Discovery with 20in wheels isn’t exactly at the top of my wish list. However, with a heap of camera gear to charge and the keys to the BM Pro Disco sitting there full of 12V gear, it was a pretty easy choice to bring it along as the camera rig. Up front was Adventures money man, Matt. Fresh from a European trip with his family, he spent a night or two in his bed before loading up the swag and heading north. Matt normally spends his time heading to the hills with his wife and kids in their Jeep, so punting someone else’s car through the Tele, 4,000kms from home pushed his comfort zone to the max. Of course, you couldn’t tell from the outside. Mr Cool and Collected never faulted, even cocking wheels in the air crossing the infamous Palm Creek.

Riding shotgun in the Disco was camera magician, Jack Murphy, who also doubles as Outdoor magazine editor. Since he was a teenager, he's been travelling the world shooting photos that make mine look garbage, so he was right at home in the red dirt and azure waters of Cape York. He’s probably been to the Cape more times this year than most will ever do in their lives (as this magazine goes to print, he's there yet again) but somehow managed to be outside the 4WD more often than he was in it. I reckon it's a safe bet he’d be the only bloke to ever run the length of the Cape holding a camera.

Fittingly, our video man for this trip was a bloke by the name of Cam. Handy Cam. He’s probably the quietest bloke I’ve ever met and I'm still not entirely sure he was actually in the Cape at all. From what I could see he was juggling multiple cameras and a drone so smoothly we might as well have been in a studio. I guess that’s the key to success on a big trip like this: surround yourself with people who know what they’re doing and things just work.

It’s only fitting that the biggest 4WD and trailer in the group also had some of the biggest personalities. Now I’m not sure if the guys from Zone RV are ever going to stray from building top-notch caravans into doing offroad tours, but if they ever do it’s worth tagging along just for the radio banter. Big Dog, as Matt decided to name their setup, consisted of Matt and Tom for the first half of the trip, with owner Dave flying into Weipa to meet us halfway up. It’s a safe bet Dave might be the bravest man I know, because the reason he flew up was he missed the kick-off date, due to his wife giving birth to their first born. A day or two to wash some nappies, then he was off on a plane to check out Cape York. He wasn’t missing this one for the world and is already planning on bringing his young fella up as soon as he’s old enough.

Now I’ve heard of people who don’t shy away from a challenge, but Matt is more the kind of bloke who peer pressures himself into doing something, even if no one else is in the room. With probably the biggest caravan that’s ever been dragged up the Cape, Matt never once hesitated to get it offroad and into precarious situations. It just about floated the whole way along scrubby creek, dipped below the water line on the most northern beach in Australia and cocked wheels a metre or more in the air through multiple river crossings. He was also in charge of keeping Tom away from the radio. Tom came along to film a bunch of Facebook videos for the boys from Zone, but got relegated to the back seat and radio privileges revoked pretty quickly. I reckon he earned a few brownie points once the guys saw the stunning videos he produced, though.

If you’ve ever had the pleasure to meet Celso from Mars Campers there’d be a few things clear straight away. The bloke is basically a genius. He’s also incredibly unassuming. And he’s far more well-travelled than he’d ever let on until you ply him with booze under the guise of celebrating the trip. He's Melbourne based but grew up in Brazil, so is no stranger to the great outdoors. While this was his first time to the Cape itself, he’s punched out thousands of kays offroad on some of the toughest tracks between his home town right up to the Gulf country. He’s always willing to lend a hand and made life-long friends thanks to some of the best barbecues I’ve ever eaten. If you’re in the market for a Mars camper do yourself a favour and offer to pay $500 over sticker if Celso cooks you a barbecue. It'll be the smartest money you’ve ever spent.

Now it’s a hell of a drive solo from Melbourne to Bamaga, so Celso brought along his best mate Phil who quickly earned the nickname of MVP (Most Valuable Phil) for being the most hands-on bloke you’ll ever meet. Despite just coming along for the ride, Phil bounced from one car to the next helping out where he could. A year on the road with his family taught him everything from tricky camping clothes lines through to running vehicle repairs. He dove under my Ranger to help out with a wheel alignment issue then single handedly moved about 10T of dirt on Pennefather Beach with the recovery shovel. If I was stranded on a desert island and could only bring one thing to get me out of a bind it’d have to be Phil, he’d figure it out.

In the Ranger we had a full house. For the first time the stars aligned and I was able to not only bring my wife, Lauren along on the trip, but my six-year-old son, Hunter, and four-year-old daughter, Nola. We’ve been heading offroad as a family since before the kids were around. Nola did her first Fraser Island trip at six-months-old while Hunter entered his first 4WD competition when he wasn’t much older. Lauren has probably done more travel than me and travelled most of the East Coast with her family as a kid in their trusty 60 Series, then again in their brand new 80, so we’re trying to do the same with our kids.

We split jobs up pretty evenly while we were away. Lauren kept the kids clean, fed, and out of crocodile mouths while I kept the car and camper in one piece, then acted as the recovery vehicle on most of the tracks and made sure we were always heading in the right direction. While any huge trip is always going to require teamwork, when individual people have specific tasks they’re in charge of it’s a sure-fire way to make things run smoothly. The right people, doing the right jobs and having the time of their lives, is a recipe for a trip you’ll never forget.