Cape York is a vast inhospitable wasteland. Around every corner is danger; crocs nipping at your heels if you camp in the wrong spot, weeks between supplies, an ever-looming danger of running out of fuel and hoping some other traveller finds you before you run out of tins of spam. The tracks will test your mind as much as they test your vehicle.

Except none of this is true.

Well it is, but only if you go in ill-prepared. Y’see, Cape York isn’t as inhospitable or challenging as many of the shows would have you believe. It’s a bustling part of the country with friendly faces everywhere you look, if you know the places to look. 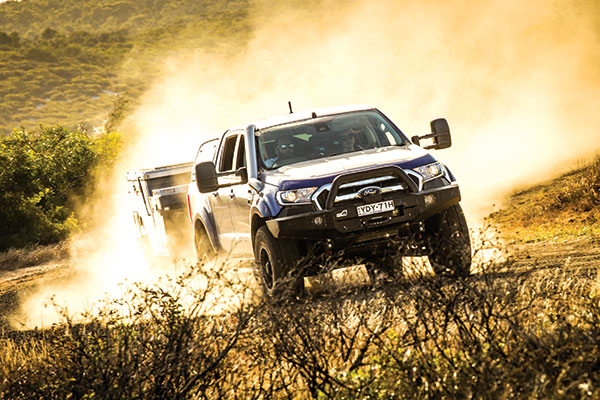 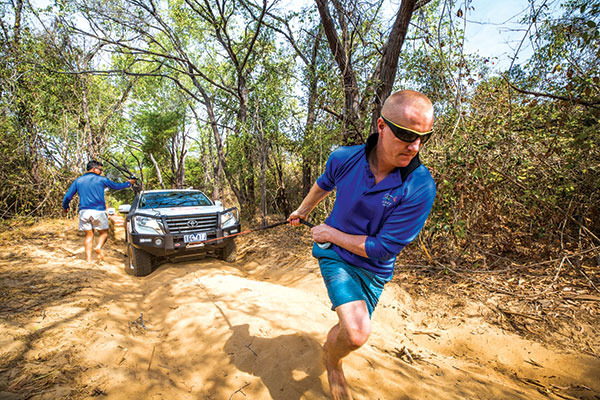 That hyped-up image has probably turned off more would-be travellers than it’s convinced to actually go, and we’re aiming to fix that. From vehicle prep to getting your noggin in the right head place these are the secrets to a successful adventure.

Let’s get one thing straight right from the start, the biggest issue you will face in Cape York is corrugations. The joy of thousands of kilometres of unsealed roads mixed with heavy traffic and torrential wet seasons means corrugations are as much a part of Cape York as prawns at Loyalty Beach.

They’ll affect you in two very different ways so require a bit of a holistic approach to battle them.

The first, is they’ll rattle everything to pieces. It will affect the base vehicle, your camper, and yourself, so if you’re heading up in an old bus don’t be surprised if you head back with a few new rattles and squeaks under the dash and a crook back. It’ll also seriously take its toll on any aftermarket accessories. Things like bull bars and driving lights are especially prone. Our convoy lost an aerial, and there were more cheap spotlights pointing at the sky than the tracks. Pick yourself up a torque wrench to get things in spec then keep a close eye on things. A drop or two of Loctite on threads is also cheap insurance.

The other issue you’ll come across with corrugations is suspension.

A suspension lift is great for gaining more clearance and coping with the weight of accessories, but big shocks are the key to surviving corrugations. As the suspension cycles a piston inside the shock pumps back and forth through the fluid. When the fluid gets too hot the oil will foam and pass through the pistons valves easier, rendering the shocks useless. The effect is called shock fade. Bigger capacity shock absorbers can hold out longer than smaller capacity shocks. We kitted our Ranger out with Dobinsons MRR remote reservoir shocks front and rear, they kept on kicking allowing me to travel at higher speeds safely. Even if you’re not chasing an increase in height a set of upgraded shocks on each corner are an absolute must-have for travelling through corrugations.

There’s a common misconception that Cape York is the end of the earth and you need 400L of fuel strapped to your back in a Mad Max style contraption. The reality is far different. If you’re exploring down each and every side track you can find and then driving around in circles for days on end you might run into strife, but for anything along the main routes fuel is plentiful at the road stops along the way. In fact, the biggest gap between fuel stops is between Bramwell Junction and the Jardine River Ferry which measures in at 166km if you head up Bamaga Road. Of course, running out of fuel up here is a serious issue, so it’s always vital to always carry a full jerry can of fuel as a back-up. Even at a huge 20L/100km a full jerry can will stretch your range out by an additional 100km, and if you’ve calculated your range worse than that fuel might not be your only issue.

I love Kangaroos. The little adorable idiots are like giant puppies walking around on their hind legs. But hot damn are they stupid. Between roos and wombats most tracks anywhere a few hours outside a capital city are lined with the mentally deficient suicide machines. The problem is their preferred method seems to be going head first at the fastest moving 4x4 they can find.

Now, you can swerve. Trying to avoid knocking a furry little critter on the head is an admirable quality in a person. But you’ll most likely end up putting your 4x4 in a ditch, hopefully with the tyres still on the ground. Quick steering inputs in a fast-moving vehicle with a camper on the back is a recipe for disaster that not only puts yourself in danger, but everyone else in the car, and anyone travelling near you.

So what’s a traveller to do? Knock the roo on the head.

Now I don’t mean go swerving all over the road for it. Just stay in your lane, slow down if you can avoid an impact, but don’t try and change your path, you’re safer hitting them head on than swerving.

The problem is without adequate protection the stupid buggers will punch through sheet metal, leaving you with a busted radiator in the middle of the night, in the middle of nowhere, with no phone reception. If you’re heading up to the Cape a steel bull bar is a non-negotiable, and it’s gotta include a radiator loop.

A combination of spot and flood lights are vital too. The more notice you get there’s a roided up jumper in front the more speed you can wash off and the less potential damage to your lifeline to the outside world. I had a set of lights on my bench for the Ranger but couldn’t get them installed in time. The result? A shiny new dent in my bull bar and a roo with one hell of a headache.

You can do Cape York without ever crossing a single river or creek, but you’re missing out on half the fun. 30 years ago river crossings were simple. Buy a diesel, put a snorkel on the diesel, maybe tie the engine driven fan off if the water is deep.

These days things are a little more complicated, but it does mean petrol and diesel are on equal footings. A snorkel is the obvious first step. Forward or rear facing doesn’t really matter as long as it’s sealed all the way from tip to engine. We went with a stainless jobbie from Phat Bars.

The next step is to understand what components on your 4x4 water ingress will affect, and come up with a plan on how to make it a non-issue. In most modern vehicles it’ll be an engine bay full of sensors, keeping a decent bow-wave as you’re moving through the water will keep most of the water out from your engine bay, with a water bra going on for any suspect crossings. If you’re in doubt a little WD40 over your 4x4s sensitive parts can keep them dry enough for a small crossing.

Even if you’re travelling in a convoy a winch, a set of recovery tracks, and a full recovery kit in each vehicle are an absolute must. There’s every chance you’ll have someone in front of you who should theoretically be able to snatch you out, but can’t either due to them being stuck further up ahead, or not being able to reverse back through a challenging section.

When you’re travelling in remote country communications are your life-line. Your phone is useless anything more than a few kays from the nearest small town which doesn’t leave you too many options. UHF radios, and smoke signals at last count.

A vehicle mounted UHF should be the first option for any serious traveller. They’ll generally have a better range than hand-held offerings, with clearer communications and no chance of the batteries going flat. The trusty hand-held units are still worth keeping in the kit though, they’re great for talking between cars and people standing in river crossings or co-ordinating recoveries.

Of course, all the communication gear in the world won’t help one bit, so run through a few rules while you’re on the long stretches of black top so everyone is on the same page. Over the past few trips to the Cape I’ve worked on a system where people will slow down or speed up in order to maintain comms between the whole convoy, we’ll also confirm everyone is “on comms” before setting off, and confirm we’ve heard a message if it’s anything important “copy on-coming road-train on the wrong side of the road in thick dust”.

A large part of any trip to a destination like this revolves around the vehicle. But you’re not there for the vehicles enjoyment, you’re there for the people. While you’re sitting around with a beer and a map putting together your itinerary consider the people coming along on the adventure and their individual needs too.

Obvious factors are drive distances and how long they can go without a shower. You might be happy smelling like a second-hand kebab and punching out 1000km of corrugations a day but there’s a good chance it’ll tick off everyone else in convoy. Take it easy on the kids too. The reality no-one wants to address is a vast majority of the major roads all look the same, staring at the same tree going past for hours on end gets old quick when you’re six years old.

Before setting off sit down and have a think about the individual participants and what they’ll want to get out of it. While you might love an extra day of fording rivers a day in the tree tops on a zip-line might be the thing that your kids remember forever.