Secrets of the Mighty Murray River

The Murray River is Australia’s longest river but did you know you can navigate her waters for almost 2000km? That's right, from Yarrawonga all the way to Goolwa! Her tributary system includes the Darling and Murrumbidgee rivers making it the world's third largest, with a drainage basin of more than one million square kilometres.

So it's no surprise the top of her southern banks make up three quarters of the Victoria and New South Wales border. 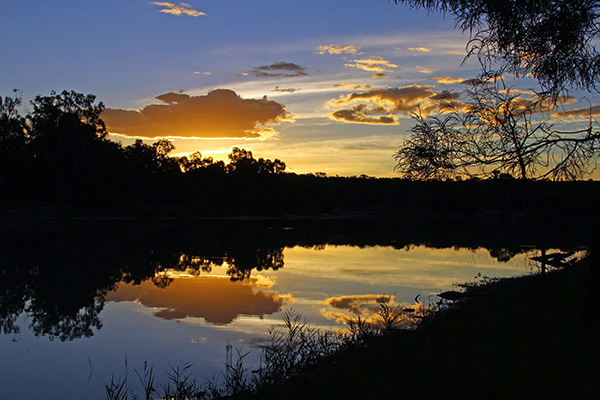 The Mighty Murray, as she’s often called, began as a seabed under eastern Australia before shifting north some 130 million years ago.

When the sea drained west, the river system formed and was partly shaped by the Great Dividing Range and the Great Artesian Basin.

Her basin's soils are salty to say the least, especially when you consider the ocean went all the way up to Swan Hill between 30 and 5 million years ago.

The Murray was also shaped by an active history. Near Barmah she diverts around the Cadell fault line, which uplifted the underlying rocks to the west about 25,000 years ago. A high mound running north-south just to the west emerged, and the river was dammed until it forged new channels, resulting in the formation of the Barmah Red Gum Forest and its associated wetlands.

LIFEBLOOD OF A REGION

The Murray region was home to many Indigenous communities, with proof of their existence going back 40,000 years at Lake Mungo, just to the north.

Hamilton Hume and Englishman William Hovell were the first Europeans to name her while taking their bickering party south in 1824, a day's journey west from Albury when they crossed her canvas-covered wicker boat. But it was Charles Sturt who first called her the Murray in 1830 downstream.

During the mid-19th Century, the Murray and its tributaries became the major highway into the heart of Australia. Two flat bottomed paddle boats first worked their way upstream in 1853, with a steamer bringing gold mining supplies up as far as Albury in 1855. Soon the paddle steamers were ranging well up the Darling and Murrumbidgee as well, gathering wool clips and other farm produce. A rail link to Melbourne in 1854 hastened delivery from Echuca's port. River traffic on 'The highway' peaked in the mid-1870s with 30 paddle steamers working the Murray, and another 92 on the Darling, until the spread of rail communications to other ports gradually killed the river transport system. However, tourists continue to travel her waters on new and restored paddle-steamers today.

The activity led to a rapid growth of Echuca as a commercial centre, and today there are a number of large towns along the river’s banks.

Today, the Murray’s flow is affected by our consumption. The river has four major dams, 16 storage weirs and 15 navigable locks, to vary flow and assure supplies to local towns.

What’s more, the challenges of her salty base are exacerbated by the deforestation of native root systems around her margins and the reductions in the river’s flows.

Compared to other major river systems in developed nations, the Murray is doing well, although she did suffer with reduced flows and salination in the drought years of 2000-2007.

Recent wetter years have helped, as have a national policy to reduce irrigation demands, but land clearing, unauthorised pumping off of water from tributary streams, and large volumes of water redirected to cities such as Melbourne continue to create environmental issues.

Submerged canyon: Off the Murray’s mouth, beyond Lake Alexandrina and beneath the ocean, lies possibly the river’s greatest secret: an eroded canyon that is greater than the USA’s Grand Canyon, forged by the river’s flow when rainfall was much higher and erosion was greater, and the ocean levels were up to 100m below their current levels.

Limestone cliffs: Downstream, you’ll see the river dominated by sheer limestone cliffs in South Australia. These were created half a million years ago by the rapid outflow Lake Bungunnia. The huge freshwater lake had emerged about 2.5 million years ago due to earth movements that blocked the river’s flow. At its peak, Lake Bungunnia covered 33,000 square kilometres from near Swan Reach to as far north as Menindee Lakes and east to Boundary Bend!

Snowy Hydro’s helping hand: The Snowy Mountains Scheme diverts water into the Murray, increasing its flow volume by about 10 per cent above Albury, but there the water flow is now down to around 36 per cent of its original volume. The water reaching the river’s outflow is now so low that without constant dredging and the protection of a barrage, Lake Alexandrina would be flooded by seawater.