Sometime in the last 10 years I’ve come to really appreciate second-hand goods. The turning point probably occurred in 2008 when my husband and I attended a house clearance auction. Scott had spied a 1970s French polished Tasmanian Oak table with matching timber seats, including two carvers and all six chairs with seats made from a strip of cow-hide tacked on with 16 sturdy brass studs. The price when the setting was originally commissioned? Around $7000 in modern day money. The price at auction? One hundred dollars with an extra $50 to have it delivered. Sold!

Since then, I’ve come to realise that there’s a huge resource of pre-used goods available at remarkably good prices – or for free – if you keep your eyes and your mind open. From camping gear, to clothes, to household effects – it’s often worth asking whether it’s really necessary to buy new. After all, the Australian Bureau of Statistics claims that every one of us contributes about two tonnes of waste annually. Personally, I’d like to see my individual contribution to that tally reduced where possible.

While my eyes are open to the continued potential of yesterday’s products today, I also realise there’s a fine line between trash and treasure and there are accepted protocols around offering and accepting second-hand gear. Key among these is our willingness to accept that sometimes (maybe often) people simply won’t want our second-hand gear. So we shouldn’t assume that they do. 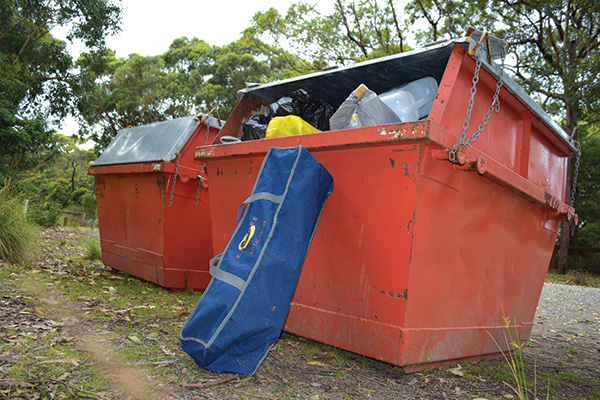 Which makes me wonder why some of us think it’s okay to leave our excess camping gear behind at a campsite at the end of a weekend away. Many of us have probably seen the result – the camp chair, the tarp or the table left in the campground after the owners have departed. The expectation seems to be that some passer-by will leap at the chance to claim the gear (broken or otherwise) to add to their own stash of camping kit. More likely, the original owner was simply too lazy to cart their unwanted gear home to dispose of it properly. And so the gear will probably end up in landfill when the local council ultimately tidies the site. Worse still, if the site isn’t serviced, the gear will lie in place to rot and rust.

Talking with a park ranger recently, I learned this disposal problem is clearly more deeply embedded among the camping fraternity than I was aware. For example, we all know people who’ll take a few bricks to a campsite to act as wheel chocks or a makeshift fireplace.  But I was surprised to learn how many of these bricks get left behind. The ranger reckoned he’d collected enough in the last few years to have built an entire house! And apparently, it’s not unusual to see whole tents left behind on site, particularly after rain. In these instances the prospect of battling with wet canvas proves too strenuous for the owners – so they simply leave the problem behind for someone else to deal with. And there’s no amount of self-delusion that makes this sort of behaviour okay. If we truly wanted to provide a usable tent to another potential camper, we’d have packed it away properly, taken it home, dried it out and sold it at our next garage sale, or given it to charity. It’s not that hard.

We’ve probably all heard of the term ‘throw-away society’.  It’s a phrase that was coined a decade or so ago to refer to the social and environmental downsides of consumerism associated with the rise in mass-production of short-lived, disposable items. Regrettably, the easy availability of cheap camping gear – from crockery, to camp furniture, right through to the tents themselves – means that these outdoors products have now joined the ranks of consumer goods that can be simply chucked away when we’ve finished with them.

It’s ironic that the campers who leave these eyesores behind probably consider themselves lovers of the environment and the outdoors.