The new camper top lets travellers adjust its position on a base, tweaking weight on the towball for optimal stability.

The boost in comforts was made possible because of a weight audit on all components, which resulted in many features being redesigned. 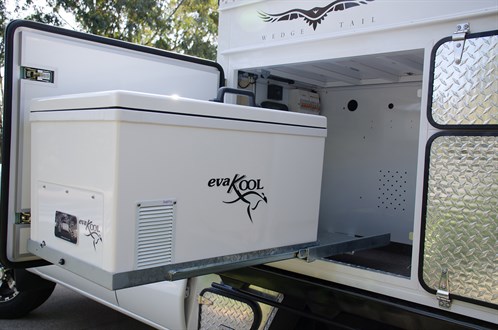 Offroad enhancements include better ramp over, construction upgrades and bigger brakes, upgraded suspension and hot dipped galvanised finished. The tray itself will offer 160L underslung fuel and water storage in addition to the 90L in the Wedgetail camper body.

Electric stands on the camper top will hasten removal from the trailer and tray, for storage when travelling on bush tracks.

Out back, the updated pod cavity provides divided storage for light bulky items, such as chairs, tables as well as an access point for campsite essentials like awning poles, hoses, handrails and leads.

The Wedgetail slide-on campers caught the judges’ attention at Camper Trailer of the Year 2015 awards when it claimed top prize in the slide-on category.