Australia has a love/hate affair with mid-size 4WD wagons. Manufacturers have been trying their luck with them for the better part of three decades now with some success and far more failures. But it seems like they’ve finally stuck.

They make a lot of sense, too. A vehicle sensible enough for everyday duties like the shopping run and school pick up, but capable enough to get you to some of the more remote parts of the country. They’re a jack-of-all-trades that promise to be everything to everyone, without necessarily excelling in any one area.

After being absent from the mid-size 4WD wagon segment since the late 90s (please, nobody mention the Ford Raider), Ford has come out swinging with its Everest range: a high-end SUV with the underpinnings of its wildly successful Ranger model with a spec sheet that puts it closer to an LC200 than its direct competitor Holden’s Trailblazer. 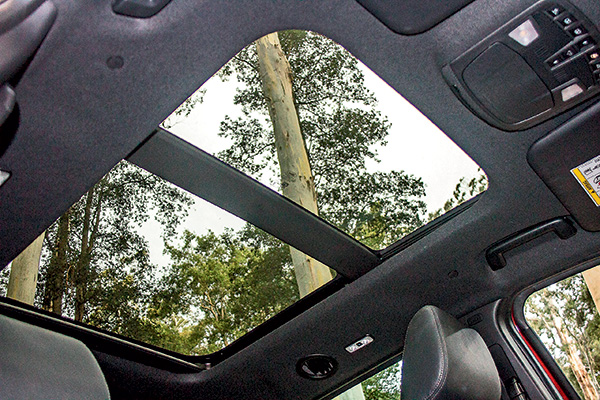 So how does it stack up as a tow vehicle? Well, we racked up 2500km along the eastern seaboard with near on 2t of camper hitched to the rear and a pair of kids in the back with the attention span of a goldfish, and here’s what we found...

Fact one: the Everest is nice inside. So nice I feel like I should apologise for not taking off my boots off before getting inside. Think extensive leather, premium materials and a weight behind each and every control with a quality normally associated with an extra 0.

Fact two: the alert chime is incessant and relentless.

With those two standouts out of the way, it’s hard to believe the Everest shares common DNA with the markedly cheaper Ranger. It literally is the most expensive Ranger you can buy and, internally, it might as well be a luxury sedan. Modern comforts include a full-length sun roof, full leather interior, heated front seats, dual zone climate control as well as separate controls and vents for the rear seat passengers.

Behind the wheel of the Everest, things are functional and neatly laid out. The heart of the experience is the dash mounted Sync 2 system (MY17 models will be fitted with a similar Sync 3 offering Android Auto and Apple Car Play). The 8in colour touch screen controls the stereo system, climate control, navigation and phone controls. The rest of the controls are on twin colour screens either side of the analogue speedo. Both screens give you controls over the various systems and are steered by twin pads on the steering wheel.

It sounds complicated but it’s easy to get used to, even showing next turn directions in the left-hand screen. As the family run-about, the Everest does a convincing job pretending it’s not an offroader underneath; electric steering is light on but helps to hide the vehicle’s bulk and, on-road, it performs like any other vehicle in traffic, even handling well through some spirited trailer-less driving criss-crossing the Great Dividing Range. So far so good.

IN THE THICK OF IT

It’s great that it handles well and drives like a car. But if you wanted that, you’d buy a car. The Everest needs to live up to its name as a mountain conqueror to even be worth a look-in.

On that front, it doesn’t shy away from the fight. To give it a solid run, we kept the trailer hitched to the rear (definitely not recommended) and pointed the HID headlights up Duck Creek Road in Queensland’s south-east. Through undulating terrain, tight switchbacks and rutted hill climbs, the Everest was surefooted and rarely came up short. The coil rear easily walked into and out of ruts without lifting a wheel, although the Watt’s linkage arrangement could potentially cause issues with larger lifts. Low-range and a rear cross axle diff lock are both available at the push of a button, although as the Everest uses a full-time 4WD system it’s essentially point and shoot until terrain gets rough. Unlike most of its competitors, the Everest has an advantage in that engaging the rear diff lock will keep traction control on the front axle active, where most others will disengage it turning into a 4x2 as soon as the front lifts a wheel.

The Everest uses Ford’s new Terrain Management System (TMS) which, unlike in older 4WDs, is actually a bloody good thing. In the Grass/Gravel/Snow mode, the throttle loses sensitivity and the gearbox will keep you in a higher gear as long as possible giving you a more predictable throttle response. Switching to Sand mode does the opposite, increasing the throttle’s sensitivity, dropping down a gear to keep revs higher and allowing more wheel slip. The final offroad mode, Rock mode, brakes wheels individually to reduce wheel slip, holds first gear and reduces throttle sensitivity to stop you accidentally blipping the throttle and breaking traction on every bump. There’s also the obligatory hill-descent control which is standard fare in most modern 4WDs. Combined, the TMS gives the Everest a serious foot-up in the offroad department.

In fact, the only serious drawback is ground clearance (a few bash plates were dented, sorry Ford), and the low-profile road-biased rubber on 20in wheels. Both easily fixed with aftermarket upgrades. In a somewhat surprising move, Ford gave the Everest an impressive fording depth of 800mm. To put that into perspective, Toyota’s LC200 is 100mm less at 700mm, as are the Patrol and Fortuner. The MU-X and Trailblazer are 200mm less at 600mm, and Volkswagen’s Amarok is literally half the depth at an ankle soaking 400mm.

If you’re a technophile, the Everest is pants-tighteningly well equipped. Additional to the trick multi-screen and multi-input control system, the Titanium comes equipped with a whole host of goodies that make life on the road a much more enjoyable experience. There’s all the gear you’d expect from a late model 4WDs like ABS, traction control, stability control and a tyre monitoring system, but the Everest takes things a little further.

There’s an in-dash reversing camera with the large easy to see screen meaning you’ll get the tow-ball under the receiver first time, every time and an adjustable speed limiter for those long weekend speeding blitzes. Trailer Sway Control (TSC) uses a series of gyroscopic sensors that can pick up the trailer minutely pushing the tow rig sideways and use a combination of reducing engine power and selective wheel braking to get it back in line. As someone who has had a trailer pull me out of my lane, believe me, this is a god-send.

BUT DOES IT TOW?

The Everest is equipped with a five-cylinder 3.2L turbodiesel Duratorq engine. That puts it somewhere below the LC200’s 4.5L V8 in terms of outright grunt, yet still above the sub-3L four-cylinders most of its competitors are running. Unsurprisingly, that translates directly across to how it tows. With near on 2000kg of Ezytrail’s Albany GT bolted to the rear, it didn’t have enough grunt to pretend it wasn’t there, yet had more than enough to get on with the job anyway. A solid blow, but the Everest is still in the fight.

Despite the noticeable weight on the rear, it never felt lacking in terms of overtaking power or winding up steep grades. It’d always do whatever you asked of it, you just needed to push the pedal a little harder with the trailer on. That said, the brakes were more than up to the task, the disc rear confidently pulling both Everest and trailer up.

One area where it all falls apart is the rear suspension. Now don’t get me wrong, we racked up a lot of kays on the Everest, to the point that Ford was probably a little miffed, and all without a single concerning moment or doubt in its ride or handling, but there is a ‘but’. The rear suspension simply wasn’t up to the task. It noticeably sagged as soon as the Albany GT was lowered down on to the towbar. Now, admittedly, the camper has a large tow-ball weight pushing 200kg, but with a braked tow capacity of 3000kg, it should be able to take much more. If you’re planning on doing any semi-regular towing, a set of heavy-duty rear springs and shocks will be a necessity.

There is another but, and this time a big one. Ford claims a braked tow rating of 3000kg which, at first, seems impressive. But it doesn’t paint the full picture. Between trailer and vehicle it has a maximum Gross Combined Mass (GCM) of 5800kg. Knock 3000kg off that for the trailer and you’re left with 2800kg. Just 305kg on top of the Everest’s curb weight of 2495kg. That’s 305kg divided up between front and rear passengers, cargo, modifications like bar work, heavier wheels and tyres, dual battery system, winch, drawer storage. Put simply, if you have even basic towing mods or an unhealthy affliction for pizza, a 3000kg trailer simply isn’t going to happen.

If you pine for the old days where 4WDs were simple, engines were big, and power windows meant cranking the winder really fast the Everest will probably seem like all that’s wrong with the world. Despite its new MC classification (Everest owners will know what I mean) it’s simply not the rough and tumble 4WD some people yearn for.

What it is though, is a capable, incredibly well put together do-it-all kind of rig. It’s got the road manners of a passenger car, the everyday practicality of a family car, the ability to comfortably tow most camper trailers on and offroad and enough prowess in the dirt to hold its own. And it’s absolutely jam-packed with technology. For some, it’ll be the best car they’ve ever owned. So if you’re after a 4WD that can do the shopping run comfortably then load up and tow your trailer to the other side of the country, the Everest would be one hell of a vehicle to do it in. If only there was a way to shut up that door chime.

Check out the full review in issue #111 of Camper Trailer Australia magazine. Subscribe today for all the latest camper trailer news, reviews and travel inspiration.