The strip of soft sand we were travelling on, more a narrow ledge than anything else, became narrower and narrower. To our immediate right, the jagged spires of sea-eroded limestone rocks looked uninviting, while the churning sea was downright intimidating. Suddenly, the ledge gave out completely and the Discovery lurched sideways into a fettucine-like porridge of sand and weed.

I thumbed the gearshift back to second, the low-range box growling in time with the increased rumble from the V6 turbo engine. The only real response, though, was a plume of sand thrown through my open window.

I clambered out and surveyed the situation. It was only then that one of our group noticed the faint exit track 200m behind me. About then, the second Disco in our group fell victim to the sharp limestone that lurked under the sand and weed, with his tyre sighing out its last bit of air. 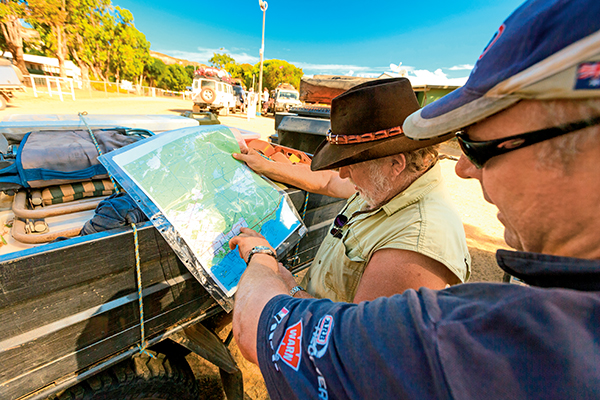 Neither spot was a great place for a recovery, nor a tyre change, but you can’t choose where the situation goes belly up; you just do the best you can. With a couple of Maxtrax and a bit of digging, I scrambled backwards on to more level territory out of the way of wind and waves. The tyre change didn’t go as well, though, with a brand new air jack blowing at the seam. The repair crew scrambled as the Disco pitched sideways, trapping a tyre in the wheel well and nearly ensnaring one of the crew.

We were glad to leave the beach and slink in behind the low dunes, the track travelling east, parallel to the coast, for another few kilometres before we slipped back on to the harder-packed sand on the shore.

Our trip had begun more than a week earlier in Esperance, WA. After packing food into boxes, and meat and cool drinks into fridges, we were ready to hit the beaches all the way east to Streaky Bay, SA.

We hit the sand right on the outskirts of Esperance and, within a few minutes, climbed what was one of the highlights of the whole trip. From the wave-washed sand at the base of Wylie Head, this dome of granite rears upwards in an unbroken curve of unblemished rock. For first-time devotees, it can be a daunting experience as you nudge your vehicle up to the rock face and then, in low range, drive up the steep slope, seeing only sky through the windscreen.

From there, we dropped down on to the sand of Wylie Beach and travelled the sweep of coastline to Cape Le Grand National Park, stopping to watch a couple of seals playing in the surf just 100m offshore.

Once we entered the Cape Le Grand, we were forced onto a section of bitumen that took us past delightful Lucky Bay and then on gravel to Rossiter Bay.

The next day we headed off again, taking Poison Creek Road to join the (OTL) Track that strikes east through the Cape Arid NP. After camping that evening at Israelite Bay, we opted to follow the OTL track for the next 30km before cutting on to the beach for the run north. This allowed us to drive 50km or more without one of us getting bogged. It was the only day of beach driving that good fortune smiled on all of us.

The cliffs of the Great Australian Bight start just east of here at Point Culver and a track climbs the Wylie Escarpment to begin its slow and tortuous way east either across harsh limestone outcrops or through mallee scrub.

After two near full days of “the horror of the limestone”, as I call it, we began to wind through mallee scrub-covered white sand dunes and I knew we were getting close to the track that would lead us down the escarpment and on to the beach. The descent was easy and it was with a touch of relief that we drove on to the sand, only to be reminded of our tyre pressures as the soft sand ensnarled some of our convoy.

It had been a big day of 125km when we made camp in some low dunes at the base of the 70m-high cliffs of Twilight Cove. This is a truly exquisite spot and, in my opinion, the most remote and dramatic beach you can reach by vehicle in southern Australia. We spent a couple of nights here because it was so good — and because everybody had worked so hard to get there for a day’s respite from the constant jarring of the tracks.

The next day saw our convoy (me, in particular) slide off the lip of sand and get bogged, before creeping back behind the first line of dunes to continue east. We left the beach at the Eyre Bird Observatory — once an OTL station and the only one anywhere near its former glory — stopping for a short time to talk to the volunteer caretakers who look after the place, and to check out the small but interesting museum.

We picked up the OTL track after leaving Eyre for an easy and enjoyable run east. We climbed the scarp at Madura and, with permission from the local stations, used the Old Coach Road and camped that evening on a saltbush plain west of Mundrabilla. Next morning, we descended the scarp and headed out on to the Roe Plain, just behind the dunes, heading to Eucla, the tides being way too high to tackle the beach east of Red Rock Point.

Once east of the small tin-shanty hamlet of Wanteen, we hit the beach again, in the hope of running the final section into Eucla. But the tide was still high and, after playing silly buggers in the seaweed and soft sand, we took the easy way out and headed along the ‘Starling Trappers’ tracks to civilisation — Eucla, that is!

Camp was hot showers, cold beers and a great meal in the restaurant. Next day, with a few of the crew changed over, we plunged back into the scrub as we pushed east into South Australia and some of the best beaches, hidden coves and rugged cliffs you can find on the planet.

Best guides and maps: Ron and Viv Moon’s Across the Bight & Nullarbor, an Adventurer’s Guide.

Good maps of this region are in short supply. If you are heading off the bitumen (as you should) then the 1:250,000 topo maps are the best. Or get a Hema HN-7 Navigator with all the maps you’ll require.

Check out the full feature in issue #89 June 2015 of Camper Trailer Australia magazine.