TRAVEL: FROM BROOME TO PERTH DOWN THE WESTERN AUSTRALIAN COAST

For the people who live there, the joys of the west coast are hardly a secret. But those of us on the other side of the country are often discouraged by the distance and think we have everything we need on the east coast. Maybe that's what the Western Aussies want us to think; if we lived there, we'd want to keep it to ourselves, too.

On our recent lap around the country, we managed to take sometime and travel down the west coast from Broome to Perth. 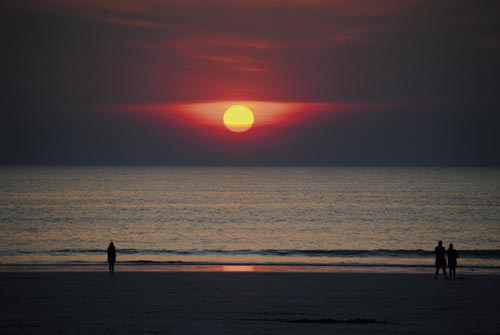 Although it serves as the starting point for our journey, Broome deserves some real attention. In fact, even though it's just a matter of opinion, Broome is close to being the best thing about the west coast. From the wide expanses of the iconic Cable Beach to the 'Stairway to the Moon', Broome itself is a gem, and a must-see destination.

With a starting point as beautiful as this, you'd expect it to all be downhill from here, but the WA coast maintains its beauty.Travelling south from Broome, you have to drive roughly 600km before you hit something, and that something is the Pilbara town of Port Hedland. If you're like us, you'll more than likely just keep going.

After the first of many nights at a roadside stop, we drove into Karijini National Park. We were initially very confused, however,because while there was a sign welcoming us to Karijini, the surrounding desert scrub looked much the same as it had for the previous 200 km.

Unperturbed, we set up at the Dales Gorge campsite, a reasonably priced and well-arranged spot. As we walked to the gorge, we soon understood what makes Karijini so amazing, and why it always comes so highly recommended.

This gorge, and the others like it in Karijini, tend to appear all of a sudden, seemingly out of nowhere. In fact, if you didn't know they were there, there's a chance you'll miss them altogether- the surrounding desert just keeps going.

The beauty of the unique ecosystems in these gorges is something special. Green foliage is everywhere, and spectacular waterfalls spill into amazingly pristine swimming holes. We went for a swim in Circular Pool, explored a few walks and lookouts throughout the park, and went for an adventure into Hancock Gorge.

The journey into Hancock Gorge advertises itself as little more than a walk, but it's so much more. You have to wade through waist-deep water, climb sideways to avoid deeper pools and 'spiderclimb' through narrow gaps while waterfalls cascade below you, all for the reward of an isolated and gorgeous swimming hole at the end. This walk was easily the best we tried along the trip.

From Karijini we took the route through Tom Price and back to the coast, our next destination Exmouth and the stunning Ningaloo Reef. Exmouth itself is quite a nice place to visit, even without the allure of the reef close by, but camping is limited to caravan parks.

The best spot in this area has to be in Cape Range NationalPark, on the other side of the peninsula and smack bang on the amazing Ningaloo Reef. The camping spots dotted along the long and narrow national park provide amazingly easy access to the reef,which is straight off the beach.

Turtles, reef sharks and an abundance of fish live in this area,and with a snorkel and goggles you can have front-row access to their beautiful home. There are lots of snorkelling spots with camping nearby, but they're popular so get in quick during peak times. If you would rather not cram in with other campers, access to the park is only a short drive from Exmouth.

Comparisons are often made between Ningaloo and Qld's Great Barrier Reef, and it's hard to fault the former; it's free of the busloads of tourists, and the fact it's straight off the beach and next to the national park makes it perfect for camper trailers.Further south, still on the Ningaloo Reef, you'll also find Coral Bay, which provides a sheltered environment and all of the joys of the reef, but in a more family-friendly environment.

When it comes to natural beauty, it's hard to beat the Ningaloo Reef. At least that's what you think as you leave Exmouth. But as you get further south and arrive at the World Heritage-listed Shark Bay, your opinion quickly changes. This pristine natural environment is an incredible sight to behold.

As you cross the isthmus (the name for a narrow stretch of land that connects the peninsula to the rest of the mainland) you notice the massive wire fences on either side of the road. These fences are there to help keep out feral species and promote the native flora and fauna. As a result, this beautifully unique wildlife habitat is almost completely free of pests.

The main hub of the area is Denham, which sits right on the tip of the peninsula and is Australia's most westerly mainland centre.Check out the information centre, which gives some great insights into the town and its history.

Our first stop was the famous Monkey Mia, where we participated in that classic Australian travel pastime, the dolphin feed. In addition to the friendly (and hungry) wildlife, we were very impressed with the helpful attitude of the professionals who supervise of the human-dolphin interaction, but not so impressed with the loads of pushy tourists that come in every day.

Camping in the area is a bit pricey, but it's a nice spot to stay. To even out the higher prices, we also spent a night on the windy Eagle Bluff, a spot as isolated as Monkey Mia is busy - itwas just us and the occasional passing whale out to sea. With nothing between you and the vast expanse of the Indian Ocean, it tends to get more than a little blowy, so keep that in mind when choosing your spot.

Continuing our odyssey south, we soon came upon WA's next big'K' national park, Kalbarri. Set off the main highway but headed towards the coast, Kalbarri is another of those parks that wouldn't be much if it weren't for the spectacular gorges that dot its landscape.

This time, however, we were unable to stay because there are no places to camp in the park itself, but we found exploring everything in a day quite easy. We still saw the majority of the park and its beautiful vistas, including the iconic Natures Window,a natural rock formation that creates a window over the meanderingriver and gorge below.

The park continues out along the coast outside of the township of Kalbarri, where there are plenty of accommodation options if you want to explore more of the area.

The further south you travel along the coast, the more populous it gets, which in turn means more options in terms of places to stay and visit. We opted for camping at the Sandy Cape Recreation Park, just south of the coastal town of Jurien Bay. This is a lovely spot tucked in among the dunes, with plenty of beach access for swimming, walking or - if you've been as active as we had been in the preceding weeks - just relaxing for a few days. This is a really great camping spot; it's quiet and friendly, and far enough off the highway to be enjoyable.

It was then off to the famous Pinnacles in Nambung National Park, which is ideal for a single-day visit. You can't camp in the park, but there is plenty of space to park camper trailers - there are even wooden chocks so you can unhitch the camper and drive around the track that leads through the amazing Pinnacles.

The distinctive yellow sand here is in complete contrast what you find elsewhere in the west, whether it's the red sand of the north or the bright white of countless other beaches.

The Pinnacles themselves rise out of the yellow sand like something from a Martian wilderness. These limestone formations are actually relics of an ancient rocky shelf that has slowly, and oddly, eroded over time.

From here, it's the last leg of the journey and an easy drive to Perth. There is a lot more to see if you have the time, but we chose to head into the city after our action-packed trip along the west coast. Although we missed some of the larger coastal towns like Karratha, Carnarvon and Geraldton, we were happy to have visited some of the natural beauties instead. Of course, there is no reason you can't do both, but we urge you not to miss out on some of the amazing sights like Karijini, Ningaloo and Shark Bay.

And to our fellow east coast residents, don't be daunted by the distance to the west, and get too comfortable with the familiarity of home. The west has so much to offer.

One of the great joys of any WA adventure is watching the sundip below the ocean. Here are our personal favourites…

> CABLE BEACH, BROOME
A classic. It may be something of a travelling cliché, but that camel ride on the beach as the sun sets is an incredible experience. The sun gets impossibly large as it hits the horizon,and the beach just glows. Breathtaking.

> EAGLE BLUFF, SHARK BAY
This was not one we were expecting, but the same vast expanses of untouched Indian Ocean that make it such a windy place also make the sunset surprisingly beautiful.

> CAPE RANGE NATIONAL PARK
On the Ningaloo reef, the pods of dolphins passing as you look atone of this country's most amazing natural wonders gives this sunset a special feel.

TIPS FOR THE WESTERN AUSTRALA COAST

> Don't be afraid to camp in the rest stops. The distances between places in WA may surprise you - it can often be a whole daybefore you even get to a town, let alone a camping spot. But there are plenty of rest stops along the way which are (for the most part) clean, safe and easy.

> Get your feet moving. There are some amazing trails in the parks, and some sights you'll only see if you're not afraid to getout there and walk. But don't worry; you don't have to be super fit(we're not). Just get yourself out there.

> As the crow flies, the distance between Broome and Perth is around 2240 km.

> Call (08) 9948 1366 or visit www.sharkbay.org/monkeymia.aspx for more information on feeding the dolphins at Monkey Mia.