Back in 1886, while droving 100 horses home to the Northern Territory’s Wave Hill Station, Matt Buchanan took a daring shortcut and, with help from Mudbarra Aboriginals, pioneered the Murranji Track, named for a desert frog able to survive long periods without water.

Buchanan had previously established the Barkly Stock Route and, in 1881-82, led the largest single overland movement of cattle in Australia’s history. His new 225km cutting west of Newcastle Waters through otherwise impenetrable bullwaddy and lancewood scrub became a popular if perilous shortcut that shaved 600km off the droving distance between the Kimberley’s cattle runs and the Queensland markets.

The treacherous Murranji Track quickly gained popularity with drovers pushing cattle into the Kimberley and miners racing to the Halls Creek gold, but a lack of reliable, permanent water sources earned it a fierce reputation as the ghost road of the drovers. 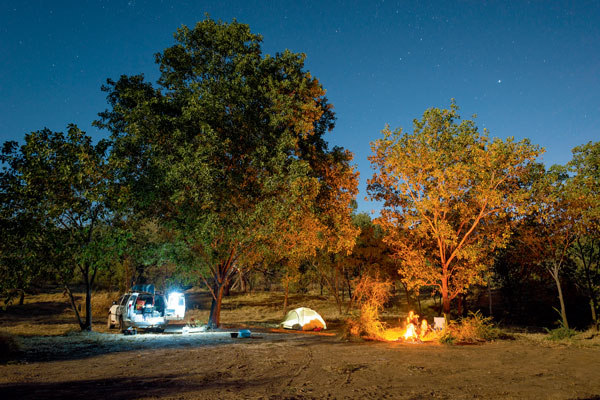 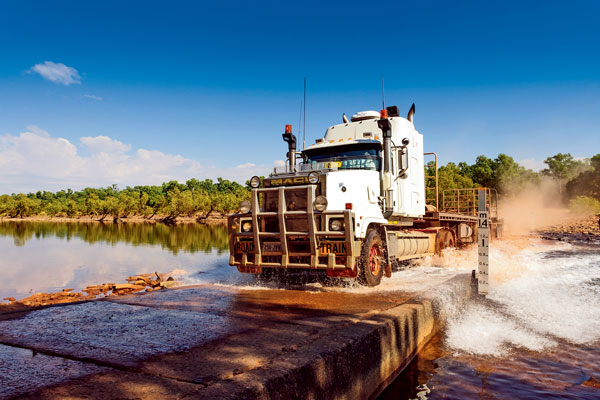 Probably because it can’t be navigated even by 4WD vehicles, the Murranji Track is little-known to today’s travellers, but the notorious stretch rates as one of Australia’s most legendary stock routes, as renowned in droving history as the Canning and Birdsville tracks. Around 12 known drovers, and perhaps many more, died on the Murranji in its early years and, on a single journey in 1905, one man, 800 cattle and 11 horses died and all but two stockmen deserted their drover.

It wasn’t until 1924, when 13 government-owned bores were sunk along the track, that cattle numbers increased. In 1944, 140,000 head were moved along the Murranji, but by 1967 its use had petered out as new roads, including the nearby Buchanan Highway, were cut to accommodate an increase in cattle operations and a return of traditional owners to their lands.

For today’s travellers heading west, the Buchanan Highway continues to provide a shortcut, leaving the Stuart Highway 58km north of the old Murranji Track and meeting it again at Top Springs before winding north through Jasper Gorge to Timber Creek on the banks of the mighty Victoria River. Established in 1950 on a permanent waterhole on the Armstrong River, Top Springs Hotel remains the track’s most important outpost and continues to accommodate travellers.

If escaping the crowds is at the top of your agenda, this 396km-long graded gravel ‘highway’ that shaves around 175km off the trip to Kununurra via Katherine, is bound to impress. It’s recommended for 4WD vehicles and sturdy offroad rigs, yet our two dry season journeys were both smooth with just a couple of shallow causeways to cross.

For many, the adventure from the east begins at Daly Waters, home to a popular campground and watering hole. Located on the Stuart Highway, 36km north of the Buchanan Highway, Daly Waters began life as the site of an Overland Telegraph Line repeater station in 1871, with the pub pulling its first beer 22 years later. It is also home to Australia’s first international airport, welcoming Qantas planes en-route to London as early as the 1930s.

Used as a refuelling point for the 1926 London to Sydney Air Race and later by WWII bombers, the old airport has been converted to a museum by the National Trust with extensive historic displays. But the airport isn’t the only historic site in this tiny town. Originally frequented by drovers on the overland cattle drive from Queensland to the Kimberley, Daly Waters Historic Pub remains a popular travellers’ rest. In the cool winter months there is barely a free stool at the bar, and the lively night-time entertainment, pub meals, swimming pool and genuinely grassy campsites priced from $9 (unpowered) make this a top place to rest up.

Turning off the busy Stuart Highway on to the Buchanan’s decent gravel track, you may well begin to wonder where all the other travellers are.

Whether you stop for the night or push about 90km west to a scenic bush camp on the Victoria River might depend on the time of day and your thirst, but if you are in no hurry, Top Springs provides respite.

In 1950, Syd and Thelma Hawks built a pub and store from bush timbers to supply the 70 mobs of drovers and cattle pushing through each season. But in 1963, after new road developments detoured traffic along the Buchanan Highway, the Top Springs Hotel moved north to where it now provides fuel, food, cold beers and accommodation at the crossroads of the Buchanan and Buntine highways.

The hotel’s flat, grassy campground has ultra-clean amenities that include a camp kitchen and laundry, and sites cost just $20 a night, regardless of the number in your group. We treated ourselves to a stint in the air-conditioned pub and had the campground to ourselves for the night.

Travelling west, Coolibah Creek provided a shady cuppa spot and we waded across the Victoria River causeway to cool our heels and chat with campers set up under the trees on its eastern bank. Road trains rumbled east ferrying cattle to Darwin from Victoria River Downs, one of the Territory’s largest pastoral stations.

Further west, about an hour’s drive from Top Springs, the highway enters Judbarra/Gregory NP and about 10km later, Jasper Gorge. A scenic chasm carved into the Stokes Range, Jasper Gorge provides a basic bush camp on the edge of a permanent waterhole at Charlie’s Crossing.

This simple clearing provides no facilities but our quiet night was memorable for dramatic sunset scenes of Jasper’s weathered rock faces fractured into stone pillars and surrounded by verdant Livistona australis palms soaking up moisture in the shade. The crocodile warnings posted on the waterhole’s banks kept us out of the water, but we did enjoy a lively campfire and a restful night.

Beyond the camp, imposing, overhung cliffs tower above as you drive through Jasper Gorge. Flowering yellow kapok bushes line the verge and roadside pull-offs provide grand vistas of spinifex-covered slopes that rise to flat-topped red cliffs on all sides. A small lookout on the southern side of Buchanan Highway provides a good place to stop for a cuppa and take in the views.

From Jasper Gorge, unencumbered 4WD vehicles can tackle the Tuwakam Track into the park, while travellers with a camper in tow can follow the Buchanan Highway for 54km to rejoin the Victoria Highway and push 27km west to Timber Creek and unhitch before coming back.

The words ‘generally flat and easy’ do much to inspire complacency, but slow-going sections of limestone on this route send travel speeds spiralling. It took our LandCruiser 90 non-stop minutes to cover this 20km track, bumping over an ancient bedrock of giant fossilised stromatolites.

Beyond a couple of jump-ups, the first 6km from the eastern end offer short reprieves between some impossible stony patches before the going gets rougher and slower and the landscape transitions as great groves of grey-blue eucalypts appear.

If minimising tyre damage is a priority, a trip on the Tuwakam is going to be a snail-like journey, but this interesting ‘shortcut’ is generally flat, non-technical and easily navigable by high clearance 4WD vehicles. It’s also well marked by a series of stakes with blue arrow pointers so you won’t need additional maps to guide you through.

Surrounded by woodlands on the banks of the East Baines River, Bullita Homestead’s humble cluster of corrugated iron buildings dates back to 1960 when it sheltered the legendary Charlie Shultz and his stockmen while working away from Humbert River Station.

While enduring harsh living and working conditions, Shultz engineered impressive stockyards that were considered the best planned in Australia at the time, and is remembered as the first man to airlift livestock into the NT and transport them by truck.

Travellers can explore one well preserved drafting yard located close to Bullita Homestead, which was added to the NT’s Heritage Register in 2011 and is open for self-guided tours. This compact hub of stockmen’s quarters, a meat house, laundry, bathroom and workshops surrounding the modest homestead itself, it particular scenic at sunset.

If you’re in no hurry to get back to Timber Creek, an afternoon spent fishing for barramundi and a night at nearby Bullita Campground might appeal. This bush camp on the banks of the East Baines River provides just the basics, but its waterfront location will undoubtedly please anglers.

Barramundi is the common catch at Judbarra, preferably on lures instead of bait to protect the turtles and crocodiles that also occupy these waterways. There’s a bag limit of five barra per day (and a total of five on any person at any one time) and the minimum legal size is an inspiring 55cm.

Overnighting in the park allows more time to discover prehistoric fossils and the distinct calcite flow in nearby Limestone Gorge, or spend a full day exploring the Bullita Stock Route, a 92.6km scenic drive that includes a detour to Drovers Rest on the old cattle run to Wyndham (allow eight hours).

Birders should note that Judbarra NP is an important habitat for the rare Gouldian finch and the purple-crowned fairy wren, two birds worthy of an afternoon with binoculars.

In 1855, explorer Augustus Charles Gregory gave Timber Creek its name when he cut planks from tall paperbarks along Timber Creek to repair his damaged supply ship, the Tom Tough. The ship had snapped its keel on an arduous journey up the Victoria River as Gregory lead the first full-scale land exploration of the region, reaching the river’s headwaters and discovering the prime grazing land for which Vic Country is now famous.

Today, Gregory’ Tree (Ngalibinggag) – a large boab inscribed with the Northern Australia Expedition dates – marks the site of Gregory’s riverside base camp and is signposted off the highway just west of town. Close by at Big Horse Creek, a national park campground and boat ramp providing access to the Victoria River attracts anglers lured by tales of catches of fat barramundi fished out of its croc-infested waterways. You can try for barra year-round but according to local advice, your best bet is on a neap tide from late March to late May (the end of the monsoon season).

Top sights in Timber Creek include the Police Museum that houses a surprising array of historical artefacts and photographic collections, and views from Policemans Point over a wide bend in the Victoria River where estuarine crocodiles are often spotted.

The Nackeroo memorial that tops the escarpment above town is a poignant spot at sunset that honours 600 bush commandoes, including Indigenous Australians, from the North Australian Observation Unit 2/1st. From 1942 to 1945, the Nackeroos patrolled the far north’s coastline on horseback from bases on the Ord, Roper and Gregory rivers, enduring tough conditions and enduring a daily battle to find freshwater and survive.

From the Stuart Highway near Dunmarra, the Buchanan Highway stretches north-west 396km to the Victoria Highway, 27km east of Timber Creek.

4WD tracks in Judbarra/Gregory NP usually open from June to November, with the Bullita Stock Route and the Tuwakam Track open about a month earlier.

Check out the full feature in issue #100 May 2016 of Camper Trailer Australia magazine. Subscribe today for all the latest camper trailer news, reviews and travel inspiration.