The Old Glen Innes Road was built by convict and underpaid labour in the mid-1800s, providing passage from the mountains of New England to the sea. Weaving scenically alongside clear, perennial rivers, steep forested mountains and rolling farmland, the 180km road was considered a feat of engineering, quite literally carved into the cliffs.

A 20m-long rock tunnel is its most impressive (and photogenic) feature, its 3.3m clearance enough to allow old Cobb and Co transport coaches to pass, along with the horses and carts of the logging, mining and livestock industries that boomed here during the 19th century.

Relics of bygone wealth can be found in the ghost towns of Dalmorton and Newton Boyd, although we only made it to the former on account of the fact we had planned to camp at a private cattle property on the Boyd River at the Grafton end of the Old Glen Innes. 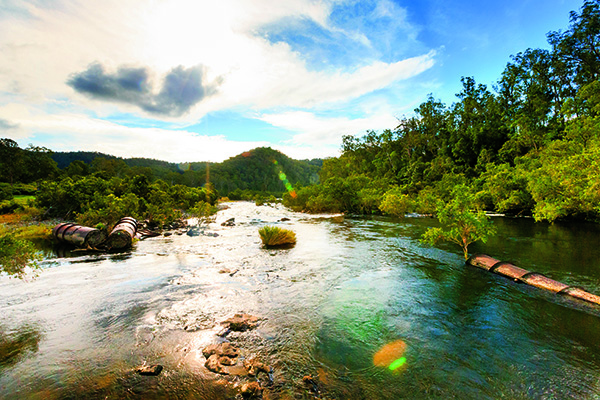 Once a bustling hamlet of 5000 people in the 1860s and 70s, legend has it Dalmorton was a rowdy town frequented by bushrangers, pioneers and gold miners alike. Apparently it had 13 pubs, which goes some way to illustrating what the culture of the place must’ve been like. But once the rivers of gold in the hills ran dry, the town was largely abandoned, and is now ghostly.

As you wander around the old shops and homes, it’s easy to allow your imagination to fill in the eerie silence of this forgotten valley with the hustle and bustle of a wild mountain town of yesteryear.

The area was a popular hangout for bushrangers Captain Thunderbolt and Black Tommy, and the latter is immortalised geologically in the Mann River Nature Reserve, where Tommy’s Rock towers over the valley.

The story goes, Tommy used the rock as a vantage point to spot approaching travellers, before descending to rob them. From its dubious construction methods to its wild west-style isolation, the Old Glen Innes was certainly treacherous in the bad old days, and still feels somehow charged with the fables of the past.

More recently, the tiny township of Newton Boyd sent 30 of its young men off to serve in World War I, but tragically only one came home. It’s hard to imagine how a small village recovers from such a loss; an entire generation wiped out in one fell swoop.

Despite being narrow and, at times, quite steep, the Old Glen Innes itself does not offer a true 4WDing experience (it’s passable in a soft-roader), but there are a number of smaller roads running off it that will go some way to scratching that itch. It’s worth the drive, however, for the history and the scenery, which is nothing short of spectacular.

Known as Big River Country, five rivers meander through this enormous valley as they surge towards the mighty Clarence, further down on the coastal flats; the Mann, Boyd, Nymboida, Henry and Orara rivers. They glisten in the sun as they flow swiftly over shallow rocky bottoms and through intermittent deep pools. Despite coming from the mountains and it being April, the water was the perfect temperature for swimming, which made our lush, grassy campsite on the banks of the Boyd all the more enjoyable.

We tried our hand at rafting, tubing and fishing, but the real fun began when the toys were rolled off the trailers and set loose over hundreds of acres of verdant riverside property.

Check out the full feature in issue #91 August 2015 of Camper Trailer Australia magazine.