We pulled off to the side of the corrugated red dirt road at a T-intersection to reconvene and plan our last couple of hours of daylight. A moment of quiet fell amongst the group, and in the absence of all other noise I noticed for the first time the ever-present thrum of Mungo; the wind whipping gently but persistently through the mallee trees which dominate much of this landscape. The sound was deceptive, promising some shimmering surf beach just beyond the thicket, when in reality we were hundreds of kilometres from the sea. 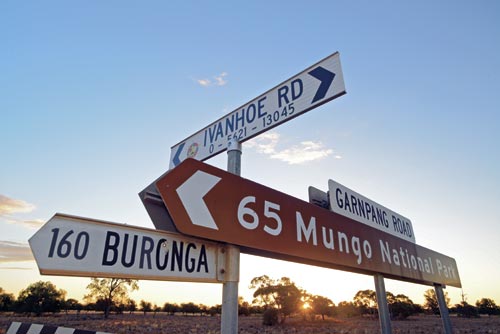 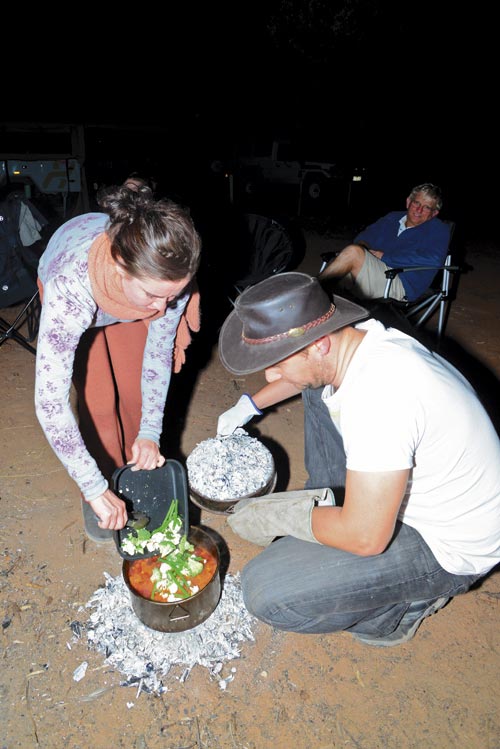 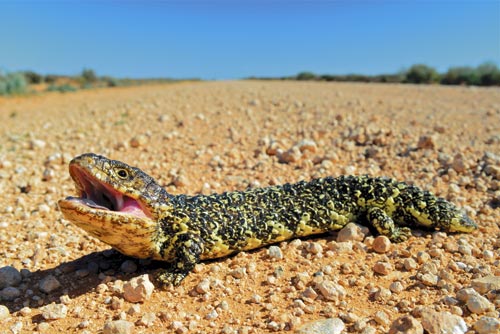 HEADING BACK IN TIME

We’d been driving for many hours from our overnight stop at the Victorian/NSW border town of Swan Hill, and the landscape had been unrelentingly flat. So flat, in fact, I was astounded when suddenly the road descended upon a vast area of even flatter terrain. There was not a tree in sight on this desolate plain, just a carpet of rather unfriendly looking shrubbery; old man saltbush, I was told, which I considered might be an excellent name for a character in a children’s book, or perhaps my next cat. The sky here was as big as I’d ever seen it.

Many kilometres in the distance in all directions the land rose up again, albeit slightly, to its former state of not-quite-as-flatness. A glance down at the Pajero’s inbuilt GPS confirmed two things: a) we were indeed traveling across a lakebed and b) someone forgot to tell the mapping software producers that these lakes have been dry for 20,000 years!

We had entered the Willandra Lakes Region, a World Heritage Site covering 2400 square kilometres in NSW’s south western corner, some 800km from Sydney. Now ‘fossil’ lakes, up to 45,000 years ago the 19 freshwater lakes of Willandra were interconnected and fed by Willandra Creek, then a major tributary of the Lachlan River. Once teeming with water but now merely parched land, they are an exceptionally rich source of fossils — plant, animal and human — dating back to before the last ice age. It is thought this is thanks to the alkaline as opposed to acidic quality of the soil, but regardless it renders this region a unique portal to the Australia of long, long ago.

We arrived at our campsite close to Lake Mungo and light a fire to starve off the impending desert chill as the last remaining light self-destructs on the horizon. It was a new moon, and while this made trips to the loo interesting (mind you don’t trip over a roo), it also made for one of the most dazzling displays of stars I’ve ever had the pleasure of gazing upon.

WALKING ON THE MOON

The next morning we drove down onto Lake Mungo bright and early. We arrived in the soupy pink light of dawn — perhaps Mungo’s most magical hour — and watched the shifting tapestry of the sky as the sun rose over the eastern bank of the old lake.

On this eastern side lies Mungo’s main attraction; a 26km stretch of ancient sand dunes known as the Walls of China — so named by the Chinese migrants who came to work on sheep farms here after European settlement. The Walls of China comprise a series of ‘lunettes’ — a rather beautiful word befitting the moon-like shapes and pinnacles carved into the sandstone by the howling westerly wind that whips across the lakebed. As well as its flamboyant displays of artistry, this wind serves to assist archaeologists by constantly shifting the sands and uncovering ancient fossils that tell of a long human occupation of this area, not to mention the giant ancestors of Australia’s most beloved fauna. Think wombats the size of hippos, kangaroos weighing 230kg, 5m-long goannas and a carnivorous marsupial lion big enough to eat them all.

While you can see the lunette from a boardwalk viewing platform, you cannot walk onto it without a registered guide, so we met up with an old mate of Stu’s, Graham Clarke, who runs Harry Nanya Tours (see his bio on page 34). Graham is one of the traditional custodians of this land, and probably the best qualified to walk us down onto the lunette and explain its vast scientific and cultural significance.

With his friendly manner and staggering local knowledge, Graham takes us on a guided tour of the lunette; a calcified 20,000-year-old tree stump here, the remains of a huge, wombat-like creature there, right next to some evidence of an ancient bushfire that probably killed three humans, whose bones are right there, too. Oh, and mind you don’t tread on these 20,000-year-old shell fossils, relics of a more abundant time at Lake Mungo, when Aboriginal people feasted on crustaceans around campfires in this very location. It’s truly astounding stuff.

Graham tells us about Mungo Man and Mungo Lady, 40,000-year-old human skeletons whose respective discoveries had thrown the scientific community into a tizzy over the origin of the modern man, while simultaneously speaking of an Aboriginal presence in Australia much older than anyone had thought. A few days after our trip to Mungo I saw a documentary about Ancient Egypt, and the search for a 3000-year-old tomb. To think, for all the hype surrounding that particular civilisation, Mungo Man had been lying ritually buried in the ground for 37,000 years before King Tut was even a twinkle in his daddy’s eye.

The sense of history at Mungo is almost tangible. Despite its aesthetic — vast, flat and empty — this lonely place feels somehow charged with life. Perhaps it is the imagination in overdrive as one tries to envisage this arid stretch of desert as a wetland wonderland akin to Kakadu in the rainy season, the lakes teeming with giant fish and tasty crustaceans, waterbirds flocking overhead, mega fauna drinking at the water’s edge and the smoke from Aboriginal campfires rising up between the dunes.

The ghosts from this abundant past seem to live on here, only just out of view. This is the magic of Mungo, and it must be experienced to be understood.

> Mungo NP is around 120km from Mildura, via Arumpo Road. From Broken Hill you’ll cover 320km though Menindee and then Pooncarie, before entering Mungo NP via Top Hut Road. Check road conditions before departure, as roads into the park can be closed during heavy rain. Contact the Buronga NPWS office on (03) 5021 8900 for current conditions.

> Mungo is isolated, so carry more than enough fuel, water and supplies.

> There is a 70km self-guided drive tour around the Walls of China. Follow the signs from the Visitor Centre.

> Main Camp has 33 camper trailer friendly sites, drop toilets and barbecue facilities, and is a five minute drive to the Visitor Centre where there are 24-hour flushing toilets and hot showers for public use. BYO firewood. The other option is Belah campground, located halfway along the 70km self-guided tour drive around the Walls of China, but this camp is unsuitable for trailers. Both sites are $5 per adult per night, and $3 for kids, payable at the Visitor Centre. Daily vehicle permits are also required for $7 per vehicle, per day.

> Graham Clarke operates Harry Nanya tours, running daily during the cooler months and sunset tours during summer. You can follow in your own vehicle, or be picked up from Mildura or Wentworth. Visit www.harrynanyatours.com.au for more info.

While merely a grain of sand in the long human history of Mungo, there is a European history here, too.

By the mid-1800s European farmers had moved in and cattle and sheep stations occupied much of the Willandra Lakes Region. Gol Gol sheep station was the largest of these, and was a prosperous, bustling place thanks to the high wool prices and boom-time economic conditions of the 1850s. In 1869 a large woolshed was constructed, Mungo Woolshed, which still stands today at the Visitor Centre and is used as accommodation for those less self-sufficient than the camper trailer crowd.

During this time, Aboriginal people had found themselves displaced, their food sources driven away and their freedom of movement increasingly difficult. They worked on the stations as boundary riders, trackers, general hands and domestic help, but were largely replaced in the 1870s by Chinese migrants arriving in Australia in search of gold. Many local Aboriginal people were eventually sent away to church missions in surrounding regions.

Times were about to get tough for the European farmers, too, with the 1890s dishing out shearers’ strikes, a depression, bank crashes and a devastating drought. In 1922 Gol Gol was subdivided and sold off under a government scheme that allowed returned WWI soldiers to settle on land, and Mungo Station was born. In 1979 this 40,000-acre property was acquired by the NSW National Parks and Wildlife Service and registered as a National Park. It was recognised for its geological and anthropological significance in 1981, and was listed as a World Heritage Area.