The Quobba Coast, stretching out about 150km northwards from Carnarvon, is wild, windswept and desolate. It is also a breathtaking mix of magnificent towering cliffs and rugged coastline, interspersed with pristine, tranquil, white sandy bays.

Rock fishing, surfing, snorkelling with amazing marine life, windsurfing, whale watching or simply sightseeing along the dramatic coastline; the Quobba Coast rewards those who make the effort with some truly magical experiences.

A visit to the impressive blowholes located down the aptly named Blowholes Road is an absolute must. In the right conditions, powerful ocean swells force water through sea caves and up out of narrow holes in the rocks causing jets of water to erupt into the air, sometimes over 20m high, creating an absolutely spectacular sight. 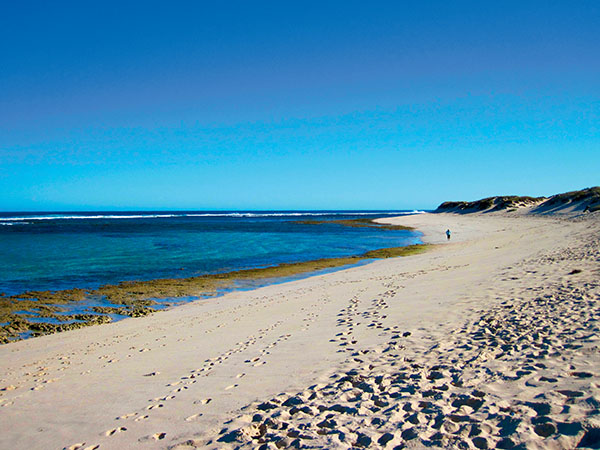 Just 1km to the south of the blowholes is Point Quobba, a sheltered bay hosting a long-established shanty town of summer beach shacks. Camping is also allowed, but there are no facilities provided. You must have a portable toilet and be aware that there is absolutely no water available. Despite the lack of facilities, many people stay for several weeks. The sandy beach and protected bay make for great swimming and snorkelling, with plenty of marine life on show.

Quobba Station is legendary for land-based game fishing. With 80km of coastline bordering the Indian Ocean and water depth reaching up to 25m within casting distance from the rocks, the game fishing opportunities abound with sailfish, Spanish mackerel, tuna and bonito among the many trophies that have been caught off the Quobba Station rocks. If your cast isn’t all it could be, then you might like to try your hand at ballooning.

Red Bluff is a spectacular headland with a break that is legendary in surfing circles. But it’s also appealing for many other reasons. Fishing is still on the agenda but other marine life including turtles, dolphins, manta rays and whale sharks can also be spotted. The headland protects a bay with a shallow reef and on calm days, swimming and snorkelling are the go.

Gnaraloo Station is another working pastoral station, which offers tourist accommodation as well as having a strong conservation focus. The area lays claim to having world class waves at numerous spots along its coast, with the majority of surf being recommended for experienced surfers only. Just a 2km drive south of the campsite is Tombstones, described as “the wave” of Gnaraloo. In surfer-speak, it serves up a left hand, full barrel wave that can break for up to 500m.

The snorkelling, right off the beach, did not disappoint. I have never encountered so many turtles in a single dive, young and old, and they weren’t at all shy. The coral was kaleidoscopic and the reef fish abundant.

Gnaraloo Bay is literally the end of the road. There is no road access further north, the route out is to turn around and retrace the way you came in via the blowholes. But that no-through access is why this part of the coast has remained relatively unknown. You have to consciously make the detour, but boy it is worth it.

Check out the full feature in issue #86 March 2015 of Camper Trailer Australia magazine.