For three years in a row, water flowed from western Queensland into Lake Eyre, and with it brought an explosion of life.  Pelicans and cormorants in their thousands made their way, as if by magic, to the rivers, channels and lakes, and eventually into Lake Eyre itself. They were going fishing.

The western river systems that flow through the Channel Country from the Thomson and Barcoo Rivers join south of Longreach to become the mighty Coopers Creek which sometimes, and only sometimes, reaches Lake Eyre, as do the Diamantina and Georgina Rivers.

These massive waterways explode with fish and other aquatic life creating a world of natural beauty equal to anywhere in the world. These are the rivers of folk law and legend, and the yellowbelly fish is part of that legend. 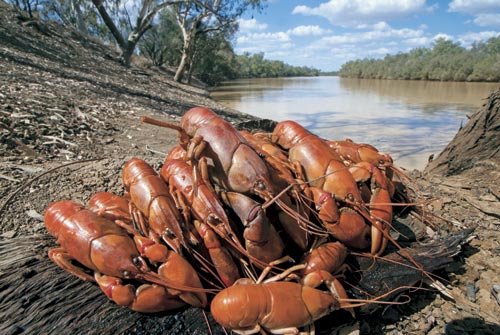 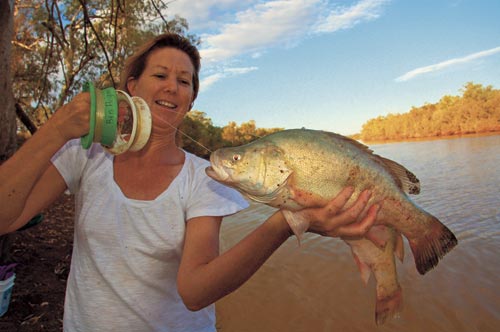 Yellowbelly, or golden perch (callop in some parts) is the staple fish species of the great rivers of western Queensland. Even as the interior dries — and the rivers reduce to a series of permanent water holes through the Channel Country — yellowbelly remains in good numbers and is relatively easy to catch.

In the west, fishing rates alongside rodeos and gymkhanas as a family-favourite activity. Locals regularly head away for the weekend to camp under the shade of the hardy coolabahs which fringe the rivers and billabongs along the labyrinth of channels. What better way to spend a few days than catching and eating one of the great Australian inland fishes?

Apart from the Murray cod, the “yella” is probably the best known Australian inland fish — a great sport and eating fish which will readily take lures and live baits. Lures of varying types have been used for decades but, without doubt, the best and most reliable fishing method is using live yabbies. These have a range of titles: crays, cray bobs, crawchie, blue claw, yabbies and no doubt a few others. No matter your name preference, they are certainly the best bait.

In the Thomson River, the dominate species is an introduced crayfish, the red claw, which often grows to more than 30cm and is great eating. But as bait, the only ones worth using are the smaller (and unfortunately harder to catch) specimens of around 50mm (the red or blue types). Suspended about 50cm under a float with a 2/0 or 4/0 size hook, yellowbelly just love them. The red claw, easily identified by the red markings on the nippers, is less broadly distributed in the Barcoo and Coopers Creek, but will find its way completely along the river system.

With a mouth to match the legend, yellowbelly gulps down the yabbies and puts on a great fight.

This is a predatory fish, and will wait among fallen timber and weed along the river edges for passing small fish or yabbies. As such, it will often respond well to a yabby “bobbed” in among the timbers or weed beds.

Opera House traps are your best bet for yabbies, baited with pretty much any meat and, believe it or not, vegetable scraps — especially rockmelon skin. Look for holes along the river or waterhole bank or in dams, which are a tell-tale sign of the presence of yabbies. These amazing creatures will stay alive for a week or more in a wet bag, particularly if you put some grass in with them — it seems to let them move around without fighting with each other.

Another bait that works well is shrimp, caught with traps similar to Opera House traps but with finer mesh. You can even use frozen prawns, the same as you use in the salt water estuaries on the coast; the results are mixed, but they’re a good bet if you can’t manage to find yabbies.

Lures are my favourite way to catch yellowbelly, and pretty much anything else, too. There is something special about the hit you get on a lure at the end of braid, and yellowbelly hits particularly hard, gulping in the lure and heading straight for the snags. It will typically take slow-moving lures worked around snags or rocky outcrops in the rivers. Depending on the weather conditions, yellas will feed on the surface, so shallow-diving minnow or surface lures work really well, often with a spectacular take.

Other good options include large Celta-type spinners, which also work really well when trolling behind a boat. Electric motors are the go here as there is no noise and they allow you to get your lures alongside logs or other structures in the river where fish lie in wait.

Mostly, the western rivers are quite muddy, which is generally a sign of a healthy river system. After the wet season — usually over the summer months — the rivers will start to clear, although not completely. It’s then that the best lure fishing is available, with dark purple or fluoro-bodied lures working well. I find there is pretty much no rhyme or reason for what works best, but lures do need to be worked slowly and best with a stop-start action.

Fishing the western rivers is something anyone can afford. A $3 hand reel and float can be just as effective as a $900 bait caster combo. Pretty much any spinning rod and reel is all you need — use your estuary gear and you’ll be fine.

Although yellowbelly hits hard initially, it succumbs pretty quickly, so 3-6kg line is sufficient. I use braid on my spinning and bait caster rods. With no stretch, you can feel every bite or touch on a lure and I reckon it results in more fish. Monofilament line is fine for most situations, especially bait fishing.

In Queensland, yellowbelly has a bag limit of 10 and a minimum size of 30cm. It will grow well over 10kg in impoundments, but in the western rivers, 3-4 kg would be a good sized fish. It’s best to release larger fish, as these are the breeders; besides, yellowbelly tends to get fatty as it grows over 40cm. It’s best filleted and skinned, as the skin on larger fish can have a layer of fat which some people find unpleasant. The flesh itself has a delicate texture and flavour. We usually season the fillets in flour, salt and pepper before cooking in olive oil in a hot pan. It tastes fantastic.

You can also try baking the fish whole, wrapped in foil and seasoned with lemon, coarsely chopped garlic and shallots pressed into scores in the skin.

Cook it in the coals of a campfire and you’ll have a meal to remember.

Although yellowbelly is the most sought after species along the western rivers, you may also catch eel tail catfish, which is good eating when filleted. Bony bream can also be caught, and while it’s not regarded as a good eating fish it does put up a healthy fight, especially on lures.

USE ONLY LOCAL LIVE BAIT

Many of our inland rivers have been decimated by introduced species such as carp and goldfish. Use only locally caught live bait to avoid the introduction of alien fish.

Travelling along the western rivers does present some challenges particularly if you encounter heavy rain. Black soil roads typical of the road conditions in this area can become impassable very quickly, so always check weather forecasts before heading off.

Distances between towns can be extensive so you need to be prepared, and take sufficient fuel and drinking water.  Prepare your vehicle and camper well before leaving home, as mechanics are few and far between in these parts.

Tell someone where you are going and get the UHF repeater channels for the areas you are heading to before leaving.

Queensland’s Outback has so much to offer for those with a sense of adventure. Getting off the beaten track and away from the major towns has its own very special rewards —great scenery, landscapes, amazing characters, and of course great fishing.  Take the time to spend some time — you will love it.

> Also known as goldern perch or callop, the yellowbelly is fast becoming one of the most prolific freshwater fish in Australia.

> Most states impose a minimum size of 30cm for yellowbelly; however they can become quite fatty once past 40cm.

> Yellowbelly has a large paddle-like tail which it uses to put up an excellent fight — particularly when fishing with lures.

> Visit www.queenslandholidays.com.au for more information on the Queensland rivers, lakes and waterways.

WHERE TO FISH FOR YELLOWBELLY

Almost everywhere there is a town along the rivers that feed the Lake Eyre Basin, there are great camping and fishing spots by the water. Here are a few of our favourites:

> The Crossing at Retreat Station and Welford National Park