With barely a week of summer left on the calendar, we arranged with some long-time 4WD buddies to see how much fun we could pack into it with a camp in Cooloola Recreation Area (CRA), Qld. The answer was: plenty. And there were literally hundreds of other fun-in-the-sun-seekers doing the same thing. From Noosa to Rainbow Beach, they were beach and bush driving, camping, walking, surfing, jet skiing, trail bike riding, fishing, horse riding and generally lounging around.

We planned to rendezvous at the Noosa North Shore campground, in the paperbark forest at the southern end of Teewah Beach, a drive of less than two hours for our friends from Brisbane. Coming from Hervey Bay, our route was a bit longer but had the advantage of more opportunities for adventure on many detours and country back roads along the way.

Following the blacktop through Maryborough and the hinterland west of the Great Sandy Strait, we soon reached the road to Rainbow Beach and, about 15km south of that township, turned into Cooloola Way and the CRA. This unsealed ‘shortcut’ through the park’s western catchment is officially classified as a 4WD track because of some rough and low-lying stretches that become boggy after rain. Recent storms had left some puddles and large tree branches littered in the track but we skirted or squeezed our way through these with Tikay, our Kimberley Karavan, in tow. 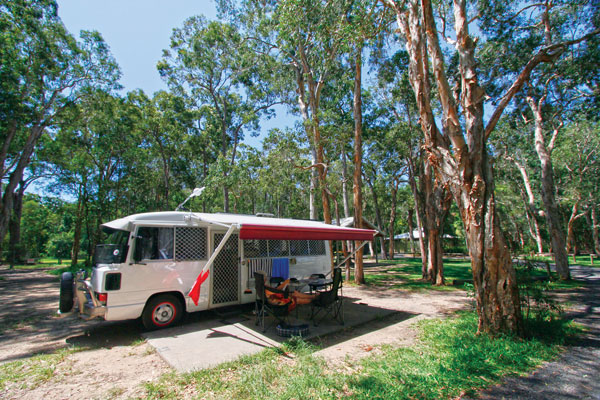 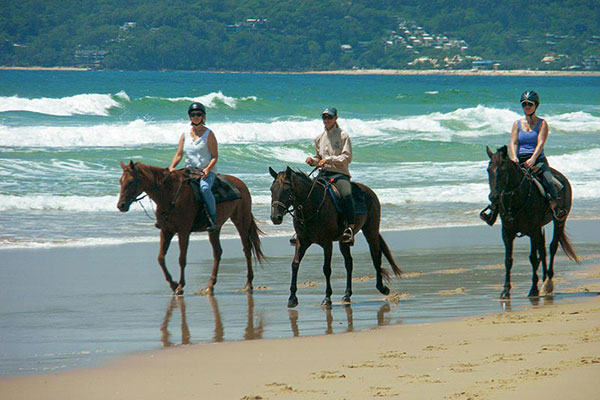 After a scenic 35km drive across a plateau of grass trees, wallum banksia and open eucalypt forest, we took another 4WD side road into the heart of the ‘Noosa Everglades’ – a melaleuca woodland floating in a riverine floodplain at Harry’s Hut and camping area, on the western bank of the Noosa River. The 60km river and its network of tributaries and wetlands comprise Cooloola’s superbly beautiful centrepiece.

Harry’s Camp and day-use area are well-endowed with facilities and numerous sites suitable for vehicle- and canoe-based camping among a woodland of melaleucas, bloodwoods and casuarinas. For a distance of 20km upstream, remote campsites have been established on the banks of the river and are accessible only by canoes and kayaks. To the south, the river feeds several small lakes before flowing into the large shallow expanse of Lake Cootharaba and, ultimately, the Pacific Ocean at Noosa Heads.

Cooloola Way is connected to a network of back roads, sealed and unsealed, through rolling hills and verdant farmlands to the western shore of Lake Cootharaba. At a T-junction, we turned left towards Elanda Point Education Centre and Adventure Park, a private camping area surrounded by national park and a sandy beach beside the lake. While the camping area itself is delightful, it is also a springboard for adventure in the Noosa Everglades, which may be accessed by hiring a motorboat, canoe or kayak (and camping gear, too, if you don’t have your own) or joining one of the various guided safaris or instructional eco-adventures. Sailing boats and windsurfers may also be hired for use on the lake.

Back through the T-intersection, a good sealed road delivered us to Boreen Point, which takes its name from an Aboriginal word referring to the pathway between two bora rings. Overlooking Lake Cootharaba and surrounded by its sandy shores, this small village is a popular destination for sailing, kite-surfing and canoeing. It is home to the Lake Cootharaba Sailing Club and, since 1987 when it was moved here, the historic Apollonian Hotel. First constructed in 1868 during the Gympie gold rush and initially dubbed Barlow’s Apollonian Philharmonic Music Hall Hotel, this rustic pub offers accommodation in a bush setting and a Sunday spit roast lunch that draws patrons from near and far. A short walk from the Apollonian is the Boreen Point campground, which provides absolute lakefront camping with kayaks for hire, and is an ideal base for nature-based outdoor recreation such as bushwalking, mountain biking and bird watching. For more sophisticated entertainment or retail therapy, Noosa Heads is just a 25-minute drive away.

The bustling boutique towns of Noosa and Tewantin offer a plenitude of accommodation, but we were headed for the Noosa North Shore Beach campground, about 10km north of Tewantin. To get there, we skirted the local CBD and followed Moorindil Street past the Great Sandy Information Centre (where one acquires camping and driving permits for the national park), to the vehicle ferry across the Noosa River. Two ferries cross the river every 10 minutes, seven days a week, between 5.30am and 10.20pm (12.20am for late revellers on Friday and Saturday nights). The princely sum of $16 got our rigs across (one-way, $7 for standard vehicles) and, 20 minutes later, we were checked in and camped on our powered site surrounded by shady paperbarks that swayed in the afternoon sea breeze. Being all hot and bothered after setting up our home-away-from-home, we walked all of one minute to Teewah Beach and had a refreshing dip.

The next morning, a fresh easterly wind cleared a dappled overcast to reveal a blue sky that boded well for our drive up Teewah Beach. One great advantage, among many, of the Noosa North Shore camp is that it’s right next to the third cutting, a strictly northbound vehicle access point to the beach. After a leisurely breakfast while the tide ran out, we hit the beach around 9.30am and headed up the long, wide stretch of pale gold sand to Double Island Point, still hidden in the sea mist 50km to the north. While not as spectacular as the towering sand cliffs along Rainbow Beach, the steep, multi-hued dunes flanking Teewah are an impressive product of geomorphic processes over the past 700,000 years. One of the best places to view these remarkable features in close proximity is at Red Canyon, an eroded gully akin to The Pinnacles on Fraser Island’s 75 Mile Beach. They make a striking backdrop to the 14km no-frills camping zone, where numerous campers were ensconced in rigs of all kinds on absolute beach frontage.

About 8km short of the point, our dash-mounted sat-nav showed a shipwreck symbol on the shore, marking the final resting place of the Cherry Venture. On July 8, 1973, this 1625t Singaporean freighter was caught in a ferocious gale and driven ashore by 140km/h winds and 12m swells. Resisting all salvage attempts, the vessel was abandoned, preyed upon by souvenir hunters and the elements, until, in 2007, her derelict skeleton was removed from the beach. All that remains of the ship is its stainless steel propeller, now on display in Lawrie Hanson Park at Rainbow Beach.

Back on the beach, we remounted for the short drive to Rainbow Beach, via Leisha Track, and joined the throngs of avid surfers, anglers and paddle boarders enjoying the crystal waters sheltered in the lee of the headland. When we’d had our fill of sun-drenched activity, we crossed back to Teewah Beach and headed south to the Freshwater camp for an action-packed afternoon of 4WDing in the Cooloola hinterland. Our egress from the beach was delayed briefly, while a small AWD vehicle was snatched out of soft sand by a thoughtful (and well-prepared) Samaritan in a LandCruiser. After a quick tour of the picturesque camping area, we climbed the very scenic Freshwater 4WD track to lunch in the rainforest at the Bymien picnic area.

Suitably refreshed, we headed off for our post-prandial scenic drive on a 40km loop comprising the Eastern and Western Firebreaks, in the heart of Cooloola’s northern forests. For most of its length, the forest grew thickly to the very edge of the track on both sides, causing us to wonder at how well it would perform as a firebreak but, technicalities aside, it was an excellent excursion through diverse rainforest and eucalypt woodlands, and we enjoyed it immensely.

Next day was a rest day of sorts, so we took the opportunity to duck back across the river for some sightseeing in Noosa. It was another gloriously sunny day and the glistening turquoise river was busy with holidaymakers on a variety of watercraft or fishing from its banks. At The Spit, a contorted isthmus that separates Main Beach from the river mouth, bathers frolicked in the sandy shallows and thrill-seekers plied the broad channel on jet skis, heading for an adrenaline fix in the surf off Noosa North Shore. We became exhausted just watching all this unbridled activity so, after a seafood lunch overlooking the river, we retreated to our cosy camp for an afternoon of shady relaxation in our easy chairs beneath the paperbarks.

The next day dawned pretty much like the previous ones – perfect – so we packed a picnic lunch and headed for the southern end of Teewah Beach, near the river’s estuary across from The Spit. It being Saturday, throngs of weekend warriors, in fourbies, on trail bikes and horse back, swelled the ranks of holidaymakers all along the strand. While not exactly Pitt Street, the shore above the tide line was a carpark interspersed with pull-out sunshades and portable marquees; at the water’s edge, anglers cast their hopeful rods towards the inshore channels, joggers jogged and dog owners exercised their pets with sticks and tennis balls; beyond them, jet skis darted and leapt among the waves. We watched all this from the shade of our improvised hooch between the trucks, and relished our picnic with an appetite sharpened by the sea air and sunshine.

Sadly, our buddies had to return to civilisation the next day, so we relocated north to Freshwater, where we camped among the scribbly gum forest, sheltered from the winds that roared along the coast behind a southerly change. The sunshine persisted, however, and we filled the next few days with more beach driving, another excursion to Rainbow Beach and a bushwalk to Freshwater Lake.

When the powers that be reserved this 18,500sq km section of the Great Sandy NP as the Cooloola Recreation Area, they really got it right.

Check out the full feature in issue #102 July 2016 of Camper Trailer Australia magazine. Subscribe today for all the latest camper trailer news, reviews and travel inspiration.