At just 1045kg the Track Trailer Tvan MK5 Canning is the perfect balance of comfort and offroad ability. The foundations have been proven time and time again, leaving Track Trailer free to focus on the details. The new Tvan is more spacious than ever, quicker to set up, and a whole heap nicer than ever before. If you want a go-anywhere camper and want to be set-up in under five minutes it makes a damn convincing case.

Track Trailer owners don’t mess around; they tend to like to spend weeks if not months at a time traversing this wide brown land of ours. And if they own a Tvan they’re probably inclined to stay as far away from civilisation as possible, for as long as possible. The MK5 Canning facilitates this nicely. 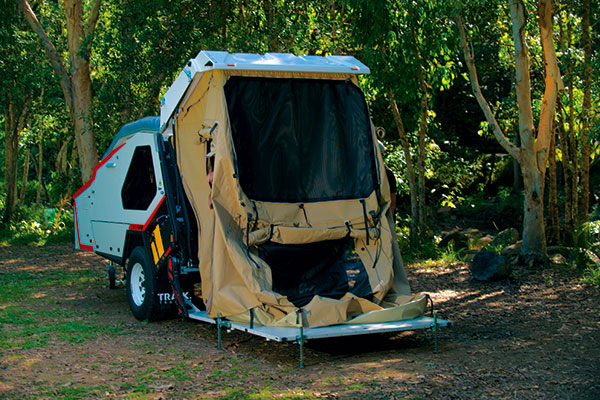 Let’s start with water. The Canning has a 108L water tank as standard, with the option to add on a 70L additional tank. But the key thing this setup has going for it is the ability to draw water from an external source such as a creek. It’s got a 90Ah lead crystal battery (126AGM equivalent) with a DC-DC charger, and is supplemented by 120W of solar. A 300W inverter will charge your laptops and other gadgets.

The kitchen has loads of pantry storage space and the stove is fed by twin 4kg gas bottles, plumbed to where you need them. There’s also a diesel hot water service on the camper on test, plumbed through to the shower but not the kitchen.

Shy on 20 years ago if you wanted to go to the far reaches of Australia and do it in style the Tvan had to be top of your list. In 2018 things haven’t changed a whole great deal in that regard, but the Tvan has been in a constant state of polishing. It’s somewhat similar to a military-spec Humvee with custom leather trim and a polished walnut dash. From front to back it’s built to military specifications, and travelling in convoy with one feels strangely like you’re about to invade a small country. That robust build quality extends right down to the ground too. The chassis starts off up front with the classic DO35 hitch that's arguably underworked, with its 3.5T rating hauling the MK5 Canning's lithe 1045kg Tare. Down the flanks the hot-dipped galvanised chassis runs back to Track Trailer's legendary MC2 Suspension. Extensive aluminium throughout the body has been backed by clever design to not only keep weight down, but strength up. Even the kitchen is attached to full width runners anchoring it all the way to the opposite side for zero deflection.

The Tvan really is proof if it ain’t broke don’t fix it. Track Trailer absolutely nailed the essentials years ago and now just continues to refine the product as technology and market needs change. It might be shinier, quieter, and a whole lot nicer than early iterations but it’s still just as capable and robust when the going gets tough.

As a well evolved and long-standing design format, and one that has stood the test of time and some of Australia’s toughest terrain, the Tvan offers numerous liveability and comfort features that make it well worth consideration if you are after a good camper trailer investment. The full-size queen mattress now lies under a raised roof line, so there’s less of that claustrophobic feeling that has turned off some in the past. And it’s so quickly accessed with the quick set-up features of the Tvan. The bed remains made up during travel and is instantly accessible.

With a hot shower and ensuite you'll feel refreshed at the end of a long day’s drive, and the dual three-speed fans and insulation all round make for a comfortable night’s rest. The capacity to draw from an outside water source increases the system's flexibility.

The large premium kitchen offers plenty of bench space and three large drawers, rounded corners and a simple-to-use wind break to the whole bench area and is free standing, requiring no support leg. The three-burner stove was chosen after extensive testing for the best in performance. The new 65L pantry resolves the old issues of having to carry food internally in plastic tubs.

You haven’t been a market leaders for over 17 years if you don’t do it right. The Track Tvan has been the trustworthy companion for well over 2500 Aussie travellers with a strong reputation for strength, comfort, innovation and intuitive design. This is the mate that you want beside, or behind you when you go to battle. It would rate as the most trusted camper in our big, wide land.

Yet you don’t stay on top for this long without keeping up with the times, and our good friends at Track Trailer don’t just keep up – they set the pace!

The Tvan best suits the touring couple that is keen for some real offroad adventures, either with or without the kids. It is one of the most popular tourers ever produced, in fact it is the fifth generation of the tough, incredibly practical, compact and user-friendly camper that is built to extremely high engineering standards to ensure your investment retains value in years to come.

Track introduced its military-inspired MC2 asymmetrical suspension many years ago and it has proven virtually faultless over perhaps millions of Aussie miles. The entire concept has held our imaginations yet the new MK5 model released in 2017 saw the commitment to its product with Track introducing more than 200 changes to the construction and accessories. There’s more head room, an ingenious Skyward Lift Up rear deck, smart electronics, possibly the best kitchen on the market, a more refined tent with easy magnetised clamps and straps, and a host of fittings, components and accessories to compliment the great design. The Track Trailer Tvan MK5 Canning is packaged in as inclusive, comfortable and user-friendly companion for you next extended adventure. Those that have seen it all before will be astounded by the long list of improvements to this fifth generation contender.

Check out all the action from CTOTY 2018 in issue #123 of Camper Trailer Australia magazine. Subscribe today for all the latest camper trailer news, reviews and travel inspiration.