Rugged and ready, the MDC Robson XTT impressed the judges with its extensive living space and room for sleeping six. This made the Robson a substantial chunk of camper, but as noted by our astute crew, some smart decisions with bodywork and frame materials means it saves on weight – something families can appreciate when it comes time to fill up at the bowser. Minimal storage space was a concern for the judges, but as you'll read, there were plenty of positives for this solid

ROOM FOR THE WHOLE CREW

Entering the MDC Robson XTT is reminiscent of stepping into a traditional, wind-up Jayco-style camper: two double beds at the top and tail and plenty of living space in between. In the case of the Robson however, the beds are housed on twin fold hard floors, and the living space is a large dinette with a central table that drops down to become a third double bed, making this big beast a six berth. Those who take a ‘more is more’ approach to baby making will love it – and also families of four who would prefer to have the kids sleep in the main tent but don’t want the hassle of packing up and resetting the dinette each morning and night, as per the standard forward fold. One comment on family-friendliness, however: despite accommodating a crowd in the bedding department, this camper has very little storage to accommodate their gear – both inside and at the kitchen. The kitchen is functional despite its lack of storage, with gas hot water plumbed through to both the sink and the shower in the ensuite tent, also included. 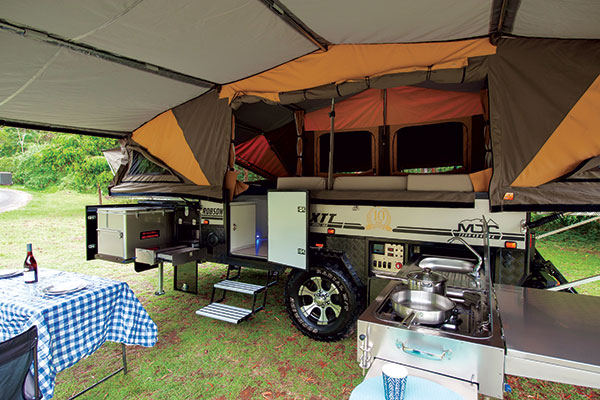 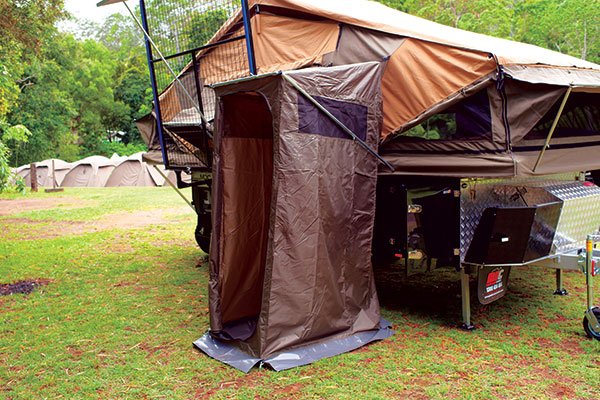 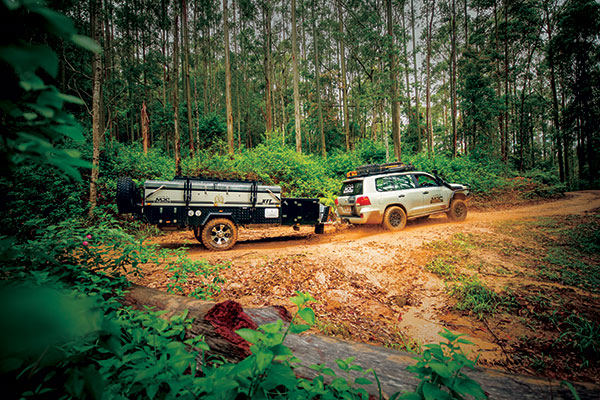 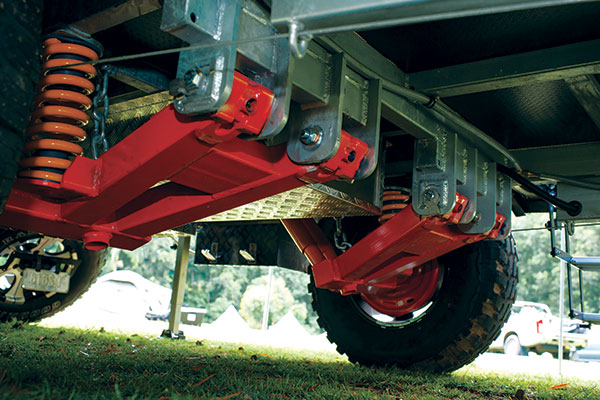 Click here for new and used MDC Campers for sale.

Self-sufficiency is a bit of a doubled edged sword for the Robson XTT. It’s easily the largest hard floor camper we saw. It’ll sleep six, or 10 if your parties involve a bowl full of keys. That means six stomachs that need to be kept full, and six mouths that need a constant supply of clean drinking water. That’s sort of where the size comes into play again. It’s physically wider than a traditional forward or rear fold, and that gives it the unique ability to run not one, but two full size fridges, one on either side. Use one as a fridge and the other as a freezer and you could easily last a month out of the one trip to Woolies. There’s two 100Ah AGM batteries for a total of 200Ah of power. 120W of solar panels permanently mounted to the boat rack will help keep the batteries topped up, although if you’re running twin fridges it’d be worth supplementing it with an additional folding panel. A 1000W modified sine wave inverter has been thrown into the mix. They can be problematic with sensitive equipment like CPAP machines, but are generally fine for items that run through converters like laptops and phone chargers.

One criticism across the board with judges was a distinct lack of pantry space. There’s room for small items in the slide out drawers, although cases of Great Northern might end up in the back of your tow tug. There’s 200L of water on board split equally between two 100L tanks as well as a Truma hot water system plumbed into the external shower and kitchen. It also has a huge payload of 860kg, so packing a month's worth of socks and undies won’t be a problem. They’ll just need to be in bags under the lounge area.

Designed to meet the family camping market head on, the MDC XTT Robson – named for MDC’s Sydney head honcho Steve Robson, who passed away in 2017 – is a big chunk of a double fold trailer that does a great job of dealing with the sort of issues that such a big trailer can bring you while providing plenty of room for family camping.

With capacity for two double beds and the option of a third if you convert the internal lounge/table, this is a camper which can sleep up to six, so you expect from the start that it will be heavy. However, thanks to smart use of composite bodywork and an aluminium internal frame, MDC estimates that they have saved around 200kg and, as seen at CTOTY, it came in at 1640kg Tare. For anyone who goes offroad, that’s a huge saving that will make a big difference at the fuel pump after the long haul on the highway.

The gross weight of 2500kg means you have plenty of load capacity as well – 860kg – and the ballweight of 185kg lets you know that this is a hefty load to pull around – not out of the park, by any means, but getting towards the top end for a camper.

Yet at $25,990 as we saw it at Mt Warning, it’s a lot of camper for the money, with a well equipped kitchen, plenty of water, electrical capacity, sturdy chassis and suspension and plenty of awning coverage.

The Robson XTT features a strong galvanised box section 100x50x3mm chassis with an 120x50x3 A-frame drawbar supported by MDC's independent trailing arm suspension. This system has stood well over many years, miles and models incorporating coil springs with twin shock absorbers and greaseable hangers. It features 16in mud terrain tyres with high quality Timkin bearings, a 3.5tonne rated McHitch off-road coupling out front and a pair of spare wheels on the pivoting bumper out back.

This rugged construction weighs in at 1640kg Tare and at 5800mm overall, it is actually quite reasonable considering its facility. Yet fully loaded with water, food and equipment the Robson will undoubtedly cross the 2000kg barrier and hence is rated to 2400kg GVM. It's fitted with 12in electric brakes and requires breakaways, and the drawbar weight is 180kg unloaded.

The underside of the trailer allows reasonable ground clearance and relief angle and displays excellent welding technique. There are twin stainless steel water tanks that are fully shrouded with alloy checkerplate and a pair of recovery points in case you are tempted to go just that little too far.

Our friends from MDC were proud to reveal their fully insulated twin walled aluminium box construction that is extremely tough but relatively lightweight. We just loved their double fold concertina design. It's quick and easy to set up, but supplies a great amount of secure accommodation for the family, or even perhaps a couple of large blokes travelling the harsh outback.

IN MEMORY OF STEVE ROBSON

“Friends of MDC Campers may know that our much loved and highly revered team member Steve 'Robbo' Robson passed away suddenly in April 2017, leaving behind a loving wife, six adoring kids, and a shell-shocked MDC team. "Big Steve" or "Robbo" as he was affectionately known was larger than life. He originally came on board with MDC five years ago with his famous "heavy right foot". He came to MDC to step into the Sales and Management role, and headed up our Sydney branch when it was first launched and successfully built it from the ground up.

His sudden passing has rocked our company and it only seemed fitting that we honour the big man by naming a camper trailer after him, commemorating who he is and always will be…  a great man, a loyal mate, an avid camper, always the last man standing around a camp fire, a tough four wheel driver, and loving family man.

Priced at the great entry level price of $25,990, we know the big fella would definitely approve and be proud to put his name to it. We are honoured to be able to do this for him and thank his wife Melissa, their six kids and extended family for the privilege to do so."

Check out all the action from CTOTY 2018 in issue #122 of Camper Trailer Australia magazine. Subscribe today for all the latest camper trailer news, reviews and travel inspiration.