Complete Campsite's customers are used to a level of finish and refinement that you rarely get at any end of the market, and the manufacturer's Exodus 16 doesn't disappoint. In fact, despite the glitz and glamour the Exodus 16 is one of the most bush-ready hybrids we've ever seen. Ample amounts of solar, huge water capacity and the ability to draw in and filter from external water sources mean you can park up until your fridge runs empty.

There is simply no more fitting description of the flagship Exodus 16 other than “Complete Campsite”! This is one of Australia’s premium, long-term, fully equipped, accessorised and comfortable campers that not only excels in creature comfort and facility but is built for long hard roads, mountain treks, mud, snow or running the soft sand on a beach. 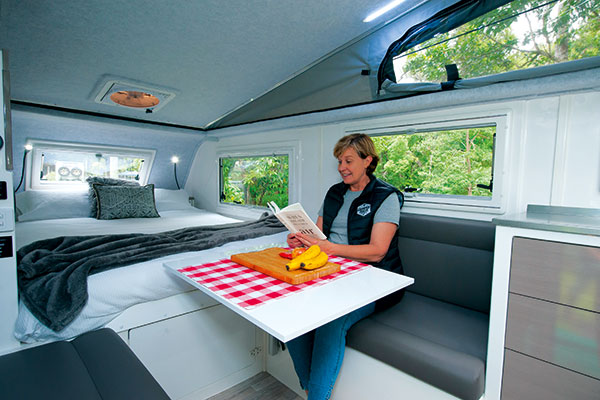 Complete Campsite has been a big part of Camper, joining us on many expeditions, including multiple CTOTY events and an extended Flinders Ranges haul. It is a big camper with real offroad credibility. It has a strong fibreglass capsule fitted to a tough 75x50x3mm hot-dipped galvanised chassis plus a huge 150x50x3mm drawbar. The inherent strength is unquestionable. A full body capsule on such a heavy duty chassis is talking our language!

Complete Campsite team its construction strength with some of the world's best offroad components starting with Vehicle Components Cruisemaster independent trailing arm suspension with twin gas shockers and coil springs either side. Their performance is legendary especially when teamed with the strong DO35 offroad coupling.

Whilst it is a big, long and quite heavy trailer at 1783kg dry as displayed, we were surprised by the terrain it can easily traverse. It’s 2350mm high but still 1950mm wide, so it follows the same track as a Land Cruiser which greatly reduces load in sand and mud. Even the recovery angle seems to miraculously clear some of the steepest undulations aided by the six-stud, 17in alloy rims and tyres and stopping efficiently with 12in electric brakes. The huge water tanks are mounted internally to keep the centre of gravity low; whilst the spare wheel is underneath in the arc of the suspension and free from obstruction.

GET WHAT YOU PAY FOR

The Complete Campsite Exodus 16 is no small camper, in any sense. With an asking price of $114,050 as it was presented at Mt Warning, and a hitch to taillight length of 6600mm this is no physical or financial lightweight, but with its imposing presence comes a matching sense of grandeur that is thoroughly fulfilled by what you experience in the camper’s use.

This is, by any measure, an impressive camper. It is about as big as you could reasonably expect on a single axle, and it has the best of equipment throughout. The body is manufactured as a single-piece unit, not, as with most composite or fibreglass structures, from a series of individual sheets joined together. This gives it a rigidity and dust resistance that is unequalled by any other system, and there is a weight control potential where load-bearing surfaces can be thickened for added strength while non-load bearing areas can be thinner.

Thus, for all its size and level of fitout, the Exodus 16 weighs in at just 1783kg Tare and with a ball weight of 180kg. That’s less than some much smaller forward-folds and, while you do get a healthy load capacity of 717kg, you know it can be towed around by virtually any mid-range to large 4WD without having to go to GVM upgrades and other means of handling the load.

There would, of course, be some penalties for the size in heavily timbered country or on tight winding trails, but that would be more than compensated for, especially on those long outback hauls when the open sky and wide red plains are your major outlook.

When you walked up to the entry door and stepped into your roomy accommodation on wheels, with enough water and electricity and comforts to leave many high-end resorts behind, you would know that this was one classy camper.

READY TO GO OFF-GRID WHEN YOU ARE

Self-sufficiency comes in many forms for offroad campers. For some, being self-sufficient is not needing to use your mate’s stereo, because your you-beaut camper has its own. For others, like Grant and Jodie Joyce, the dynamic duo behind Complete Campsite, self-sufficiency is a little more extreme than that. At CTOTY 2017 the pair had parked themselves by a river, spread out as though they’d been there a month, and had planned to be there a month more. After running over the Exodus 16 with a fine-toothed comb and white glove, two things became abundantly clear. This might be the most self-sufficient camper ever. And scrunching up a white shirt in your hand doesn’t count as a white glove.

Starting from the belly of the beast is the Exodus 16’s extensive electrical system. Powering your coffee machine and hair curler is a single battery kept topped up by a Redarc BMS30. Except that single battery happens to be a 200AH Lithium option, the equivalent of roughly 320AH in traditional AGM batteries thanks to its larger power delivery capacity. While the BMS unit is capable of topping up the battery when you’re in reach of a 240V outlet, it also controls the massive 500W solar power arrangement on the roof. Even on an overcast day with the 82L fridge running it was still putting in more power than it was sucking out.

Water was no issue either. The Exodus carried 270L on board split between 100L and 130L tanks, with an additional 40L between two jerry cans if things turn desperate. It’s also able to not only bypass the system to run the shower off creek water, you can also run it through a built-in filter to top up the tanks indefinitely. Short of realising you’re camped 100m downstream of Bear, there’s no need to move until you run out of food.

PLENTY OF ROOM TO GROOVE

When it comes to easy, comfortable living off the beaten track, the Exodus 16 is hard to beat. The largest camper in the brand’s range of hybrids, it spares no luxury and is about as comfortable as camping gets.

Available in a range of configurations including those that allow for an internal bathroom or bunk beds, the camper on test at CTOTY was in the standard configuration which is extremely functional.

Inside, a queen-sized innerspring bed provides restful dreams, while a four-seat dinette allows you to eat or hang out inside if the weather calls for it. There’s an excellent 360-degree swivel table that can be positioned however you like, including right over the bed if breakfast in bed is your thing. And really, is the Pope Catholic? There’s a huge amount of internal storage space in top quality cabinetry and a large L-shaped bench complete with a stainless steel sink. There are outlets here to run kitchen appliances should you wish to capitalise on this space as an internal kitchen – the choice is yours.

Moving outside, the rear ensuite pod is quick and easy to assemble and piping hot water will wash away your daily sins care of the diesel hot water service – also an internal space heater. This is plumbed through to the kitchen, which exudes quality and functionality with loads of storage and an 82L fridge.

Brakes 12in electric with breakaway unit

Check out all the action from CTOTY 2018 in issue #123 of Camper Trailer Australia magazine. Subscribe today for all the latest camper trailer news, reviews and travel inspiration.