We’ve tested a lot of campers in these pages over the years. We’ve put them through their paces on tropical beaches, in stunning alpine regions and everywhere in between. Some have been hardcore offroaders, while others fold out to the size of the Taj Mahal. But the one thing they’ve almost always had in common is they’re brand new, fresh off the showroom floor. In fact, we’ve even bounced a fair few campers up rock ledges and through two-foot-deep ruts with a trade plate swinging off the back. It’s a great system that lets us not only check out all the features and how they work, but their offroad and on-road prowess, what they’re like to pack and how comfortable the mattresses are.

But this time, we thought we’d do something a little different. The EzyTrail Stirling GT MK2 you’re looking at isn’t brand new. It’s not clean, it’s not polished, and there’s not a trade plate in sight. In fact, the thing was downright filthy when we picked it up. Now, don’t mistake this for any slacking from EzyTrail, we asked for it this way. It spent the better part of the last year being hauled with no mercy around the country in front of a camera crew for a 4WD touring show, punted through challenging tracks, across salt water beaches and lugged through mud that’d see any sensible offroader wincing in vehicular sympathy. We figured it was the perfect opportunity to not only get a look at a new model, but also see how it can hold up against real-world abuse. A warts and all review of one of the most battle proven campers that’s ever graced McHitch.

So how has it faired, and how did it hold up for us? There’s only one way to find out… 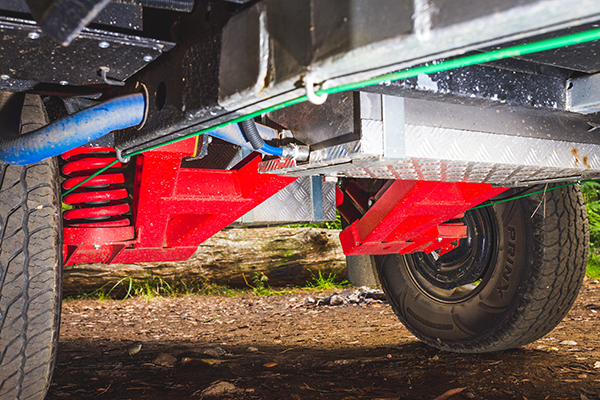 So what sort of battle damage could you expect your Stirling GT MK2 to come back from a season on a 4WD show with? Surprisingly little actually. Sure, it was absolutely filthy, but the only real major damage we could find was that the back has copped a serious hit at some stage, although the rear protection bar took most of the brunt. It’s all bent out of shape but the lights still work, the bar still opens and closes to access the spare tyre, and despite copping a few dents of its own the storage box it protects still seals and closes properly. I’d chalk that up as a win.

There’s plenty of pin stripping along the flanks too, evidence of a few lost fights with tight tracks, but the paint was thick so a quick polish easily buffed the deeper scratches out. The dust seals all held up to their end of the bargain keeping the outside on the outside, although the fridge box had let a little in; more proof that even the best seals won’t help if you don’t keep the latches adjusted.

The inside has held up better than expected too. Despite sitting in the rain there had been no water ingress, no mouldy tent and no rips or tears even though a few of the latch pins had gone AWOL. Inside was in suitably good condition, there was a few footprints on the awning that was tucked under the table, but no obvious damage to it and the seats were tear and rip free proving they’re definitely up for the job.

Let’s get one thing straight: the Stirling GT MK2 is no featherweight. Although it looks like a typical compact camper, it’s a hair under 6m with an overall length of 5700mm. That, combined with its steel construction, puts it at hefty 1600kg Tare. Despite all that it tows relatively easy with a good balance front to rear, and a reasonably supple suspension setup keeping it in line behind the tow-tug, without bouncing off the walls as though it's had too many espresso shots.

The camper’s also been designed in a way that it doesn’t need to be swung open just to check battery levels or charge it up overnight. Battery and water tank levels are easily monitored with an external panel near the kitchen and can easily be topped up with an Anderson plug up front and a water tank fill point on the driver’s side.

Setting up the MK2 should be a familiar affair to anyone with, well, basically any forward fold. Drop the legs, flip the boat loader over, unbuckle the lid then hoist it over. It’s a relatively uneventful affair with two people, and if you had a boat on the rack the front and rear hand winches will do the hard yards. Despite the additional storage box on the rear, the pole setup still takes just a few minutes. Ours had been messed up (not pointing any fingers), although they were numbered, so once we had them figured out it didn’t take long at all to get them all in place. If you pulled up in the rain you could be set up in around 10 minutes, although the awning can double that if you need a larger footprint.

With an ATM of 2250kg and a Tare of 1600kg, you’ve got a reasonably decent load carrying ability of 650kg; and the boat rack can take up to 150kg of that. The front storage box gives roughly 1400L of storage with a vented box on the passenger side, a through pole storage shelf up top, roll-out pantry on the passenger side and a fridge slide with Anderson plug for power. The front box is also vented and with tie-down points is a handy spot to secure jerry cans, although is inaccessible with the tent opened.

Like in most forward fold campers, the interior has a reasonably spacious lounge area for meals out of the rain and can convert into a bed with some strategic cushion placement, although the table’s leg setup isn’t as secure as some competitors. Hidden behind the lounge’s back rest is a sneaky access panel that goes into the rearmost storage hatch. I have no idea what you’d use it for, but you’re probably smarter than me.

The whole point of camper trailers is to make camping nicer and the Stirling GT Mk2 has plenty of shiny stuff to get that done. On rainy days you can keep yourself from going crazy with the typical CD player setup and a pair of speakers inside and out. The unit also packs a DVD player inside, which can be wired up to a lift-out 17in TV hidden under the lounge. Setting it up was a little goofy although with practise, shouldn’t be too difficult. The interior was also fitted out with LED strip lighting front to back, which isn’t common at this price so nice to see. The whole lot is powered by twin 100Ah AGM batteries, which can be charged through the Anderson plug on the front hitch via your tow-tug or with an optional 240V mains charger.

The awning and annexe are included in the price as you'd expect, although with the MK2 also includes an ensuite and portable toilet, making extended stays a little more enjoyable.

At this end of the market it’s no longer a case of “they’re all the same, find the cheapest one”. Most of the manufacturers are doing their own spin, with their own spec level, and their own ways of enticing people into the fold and it’s painfully obvious when you look at the most “budget-friendly” forward folds to some of the more spec’d out options. The EzyTrail lands somewhere in the middle making it a great option for people after an affordable camper trailer that’ll they’ll actually enjoy using without crying every time they see the repayment amounts.