There’s a lot to be said for an affordable camper trailer. While the demographics of Aussie adventurers ranges from fixing a pair of thongs with bread clips (I may have done this recently) through to not even looking at the price tag of a trailer (definitely haven’t done this) one thing remains constant. The budget. If you’re at the high-end of town or close to skint, more money in your pocket is always a good thing. Even something as simple as an extra thousand dollars in your sky rocket could be the difference between hitching up the trailer and heading off for a week, or working every Saturday for the foreseeable future just to make the repayments.

Unfortunately, more often than not, shopping purely on price leaves punters with an unhealthy dose of buyer’s remorse. It normally strikes while they’re trying to set up 300 bent poles in the pouring rain. The Skamper Kampers Dingo forward-fold somehow manages to come into the market at a surprising $17,000 (plus delivery and on-road costs) to offer not just value for money, but a quality finish without the shortcuts you’d expect. But with camper trailers on the market pushing into luxury vehicle price ranges, can one that costs less than a second-hand Commodore offer a viable alternative? Only one way to find out...

I’m not going to beat around the bush, at least not in the way I’d like. The Skamper Kampers Dingo is unsettlingly familiar. There’s an old saying that there’s nothing new under the sun and when it comes to forward-fold campers that definitely rings true. It could almost be nut and bolt identical exterior-wise to other models, but the big stand-out for the Dingo is the price. As you see it, it’s just $17,000. For number buffs, that’s almost a full $10,000 less than comparable models from other companies. 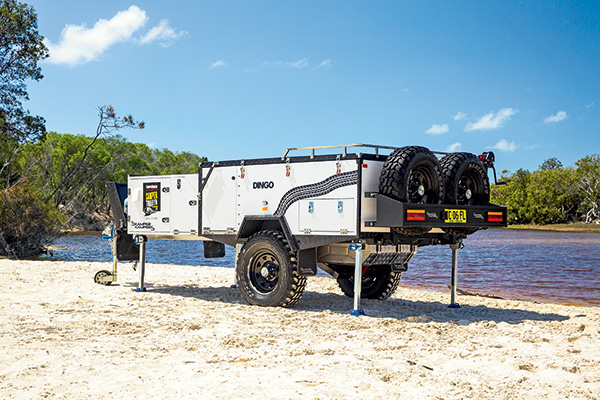 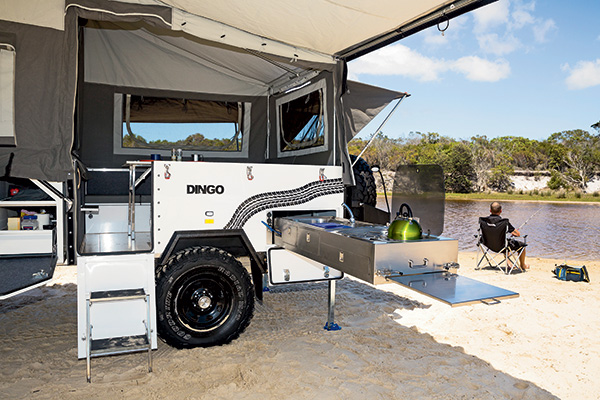 At such a competitive entry price, you’d be forgiven for expecting a massive drop in quality but it’s simply not the case. Stepping up inside the main seating area, you’ll immediately notice it doesn’t have that kitsch restaurant vibe so many models go for. The faux timber cabinetry has been replaced with powder-coated steel and the 1980s-esque fabric swapped out for easy-to-wash leather trim.

The rugged simplicity theme isn’t just contained inside either. From the front to the back, it’s obvious the Skamper Kampers Dingo is aimed at budget conscious but still adventurous families. You lose a few of the niceties some models offer like trick paint jobs and TVs, but they’re replaced by rugged interiors, extensive checkerplate protection, simple but thick paint and quick setup times with a large open layout.

Fully set up, the Dingo can easily accommodate two adults and two children. That’s a lot of gear to lug to the campsite. Luckily there’s plenty of storage room throughout the Dingo and, with a payload of 540kg to play with, you don’t exactly need to weigh each egg before putting it in the crate.

The biggest point to note is the now-standard luggage rack. While it’s not a lift-off boat loader like many others, it does provide extra storage for bulky items like swags for teenagers, an extra ice-box or two or even just tie-down points for a couple of kayaks. Like most forward-fold campers, the Dingo is made up of two distinct sections. The larger box takes care of bedding with the front box for storage. On the passenger side, there’s a pull-out pantry drawer perfect for cases of drink, bread, chips and so on. A full-length shelf above makes the perfect spot for pole storage while the pull-out fridge slide in front will happily swallow most large fridges. On the driver’s side, there’s a second pull-out pantry-style drawer as well as a large opening perfect for storing items like generators or the included Joolca hot water system and shower. Up the front you’ll also find storage for twin 20L jerry cans and two 9kg gas cylinders, there’s no included plumbing so the bottles will need to be removed and carried to the kitchen, although this can be done even with the bed set up and the fold-forward section on the stoneguard.

On the inside, storage is sparse although usable. The wrap-around lounge offers space in various hidey holes for small gear. The bedding can be left strapped to the mattress which saves on space and set up times and bulky items like clothes bags can simply sit on the floor, although the awning and annexe walls will need to sit in here too.

One of the biggest selling points of any hardfloor camper is a quick set up time and the Dingo doesn’t disappoint. Pop a few over centre latches down each side and the gas-strut assisted roof pops open immediately. If you’re feeling courageous it can be opened by hand although the included winch will yank it over in a short time. Once it’s over, there’s only a handful of poles to adjust before it’s free standing and you can lay down for the night or sit back in the wrap around lounge area. Like most campers, you’ll spend more time adjusting the awning roof than you would setting the bulk of the trailer up.

There’s no skirting the fact the Dingo is a big camper. It’s more than 5m long, weighs around a tonne and a half with a full tank and brings along not just the kitchen sink but the leather lounge and camper-queen-size bed. Expecting it to cruise through tight winding tracks unnoticed is like expecting you can drive a concrete truck through a wet paddock and not have any issues, the physics just don’t add up. That said, the Dingo is more capable than you’d expect.

Despite its length it has plenty of ground clearance so you won’t be constantly reaching for the shovel on every erosion mound you come across. The front end and lower skirt are extensively guarded with checker-plate all round. The camper is fitted with mud terrains, easy-to-repair steel wheels and independent suspension. Underneath most of the components are kept up high with bash guards where possible and a 360° McHitch up front letting the trailer do its thing in difficult terrain without throwing the tow-tug around too much.

Like most large hardfloor camper trailers, the Dingo isn’t designed to bash through the bush forging new tracks in long forgotten corners of the country, but it is a good honest offroader that’ll let you lug it down tracks you wouldn’t take in a standard 4WD.

In this end of the market, most camper trailers expect you to do without the niceties you’ll find in high-end gear. There’s not a lot of wiggle room to get costs down in the actual construction of the body or chassis of the trailer so the savings are made by making things optional. The Dingo has managed to stand on its own two feet on that front with a whole bunch of nice features like the full stainless steel kitchen with Dometic three-burner stovetop, LED lighting throughout, and brand name components everywhere you look.

On the electrical front, the Dingo is hardly a lightweight either. It’s powered by two 100Ah batteries meaning you could easily run a fridge for days without being connected to another 12V supply. There’s an Anderson plug up front allowing you to charge the trailer from your tow-vehicle in transit days with a CTEK MXS 10 240V charger for when you’re near mains power. If you’re parked up beach-side for a few days and not planning on moving anywhere the included 160W solar panel could be a big selling point as well. To make the most of the power provided there’s 12V cig-style outlets throughout the trailer as well as a 12V pump and water level indicator for the 150L stainless steel water tank slung under the rear.

Different camper trailers appeal to different ends of the market for different reasons. Some campers are purely an economical decision, it’s this or nothing kind of affair. Others are sold on their specs, either offroadability or features.

Skamper has managed to successfully straddle the balance point between all three. While it might come up short in ingenuity and the polish and shine of some campers, it more than makes up for it by offering serious value for money. As is it will cost you substantially less than a lot of second-hand units with questionable history, all the while offering a heap of name brand accessories, a five-year structural warranty, and enough sleeping and seating space to keep most families happy no matter where they travel.