Different to all of Jayco’s other signature camper trailers of the past 40 or so years in one major and important respect. It has a fixed internal double bed, whereas all the others feature wing-like beds that slide out and back from both ends once their fibreglass roof is wound up.

Add the new independent trailing-arm JTech suspension that comes with the optional Outback Pack and you have the ability to cross and “nest” on rockier ground, further emulating the practice of a real-life penguin. 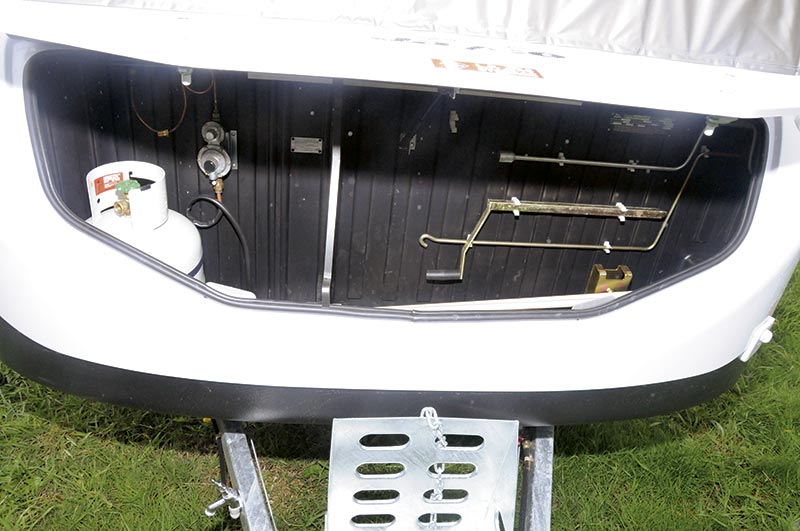 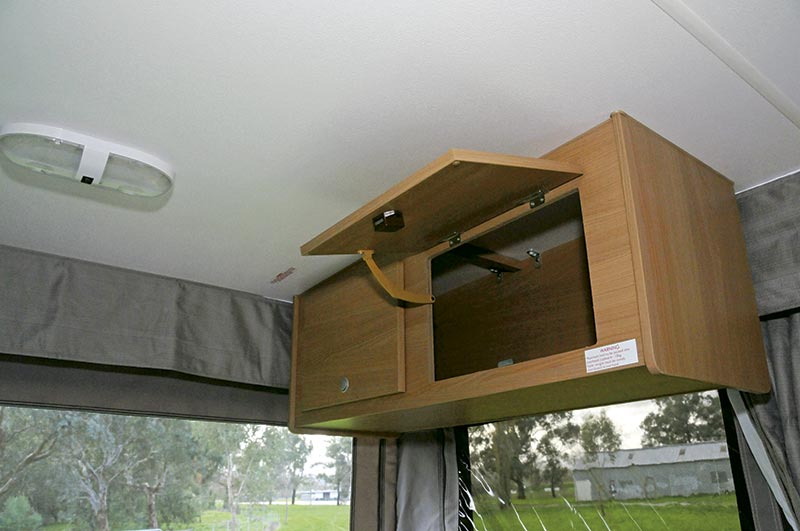 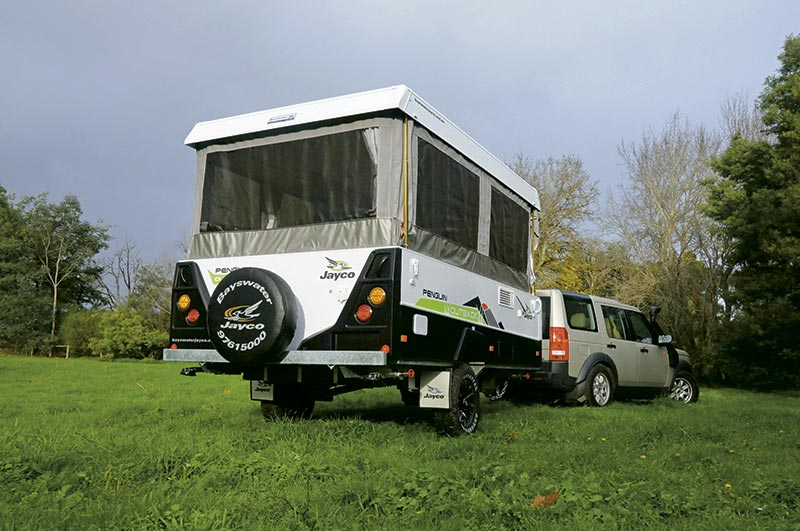 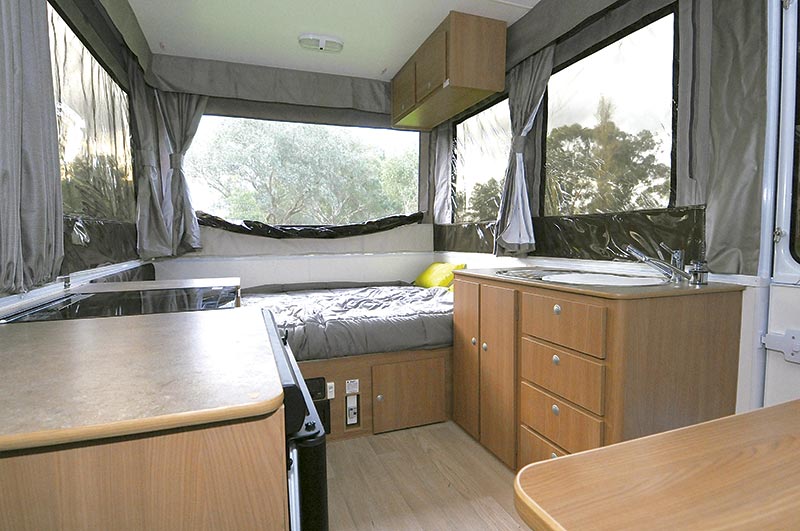 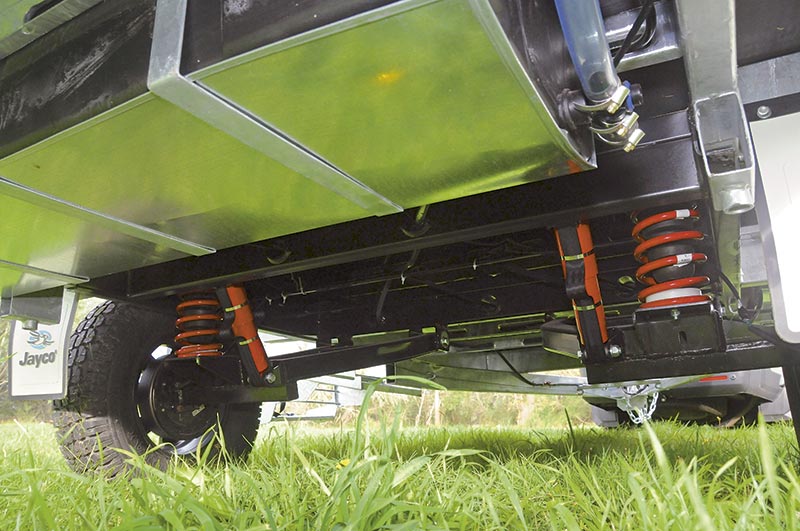 Sitting on the same galvanised Endurance chassis as the Outback versions of Jayco’s two largest camper trailers — the Swan and the Flamingo — the Penguin has the same 4340mm body length and 2240mm width. But without the bed slides it comes in around 100kg lighter in optional Outback spec, at a Tare (empty) weight of 1179kg, yet has the same standard single-axle Jayco payload capacity of 300kg.

These are important stats when you are planning to head offroad with a fairly lengthy (5.4m nose-to-tail) camper. But it’s Jayco’s new JTech independent coil-spring trailing-arm suspension, which has been standard on all Outback-spec campers (and caravans) since early this year, that really gives the Penguin wings in the rough stuff. Not only does it eliminate the low-slung beam axle of onroad variants, but it also jacks the Penguin a bit higher off the ground than the previous Outback option did, and gives it an

The Penguin versus other Jayco camper trailers is its ease of set-up and de-camp, which makes it a very good, comfortable and practical camper for overnight stops.

For a start, you can stay hitched. This is possible with other Jayco campers, but as both beds have to be pulled out to set up, the front bed either fouls or limits access to the back of your tow vehicle, particularly if it’s a top-hinged hatch. And even then you will need to have your rig straight, not partially jackknifed.

Next, there are no beds to pull out. So, if it’s dark and pelting down, you only need to wind the roof up — a lengthy cranking process that can require some animal husbandry experience to get the winding handle in the recessed slot, unless you have a 12V power winder system (an aftermarket dealer-fitted option).

In either case, the canvas stays dry and all you then need to do is drop down and connect the top half of the solid entry door, something that’s a lot easier in the latest Jayco campers than it was on earlier models.

Once inside, it’s all set up and ready. No back-straining “hockey sticks” to tension the (now rain-soaked) canvas at either end and, if you’re organised, the 1310mm-wide double innerspring mattress bed at the rear of the Penguin is already set up and ready to dive into. This is the same size as the rear bed on the Swift, Swan and Flamingo campers, but not quite as generous as the 1460mm front beds on the Dove, Hawk, Eagle, Swan and Flamingo. But the extra “squeeze” is more than offset by the time saved in setting up.

Surrounded by huge plastic windows (with zip-up vinyl blackout blinds), you have a 360-degree panoramic view of your surroundings, while keeping all the annoying flying and buzzing things at bay. And if extra guests or children/grandchildren drop in, the table drops down to make an additional front three-quarter bed.

While tasteful and useful, it would be best to describe the Penguin’s central kitchen/galley as “very functional”. The stainless-steel sink bowl, drainer and flick mixer tap (with adjacent manual pump tap if your standard 100Ah battery runs flat) has some serving space and generous cupboard and drawer space below.
It’s supplemented on each side of the four-burner (three gas plus one electric) cooktop opposite by generous bench space on top of the 93L fridge (on the left) and another storage cupboard on the right.

There is also more room under the side-hinged bed, with a “potty hatch” on the right-hand side and additional access to the large areas behind it via an external hatch to the rear of the nearside wheel. There are also overhead cupboards on the door side of the roof, which rest on top of the bed when the roof is lowered.

The Penguin is a niche model Jayco camper trailer that deserves its growing popularity with grey nomad couples because of its simplicity and ease of set-up.
Add Jayco’s new JTech independent suspension that comes standard with the Outback option and it becomes a much more capable, yet still very affordable offroad traveller that broadens the Penguin’s appeal to a wider range of adventurous couples of all ages.

I WOULD HAVE LIKED...

Check out the full review in issue #81 October 2014 of Camper Trailer Australia magazine.