Until recently, Skamper has been a major softfloor manufacturer, but a few years back the marque introduced its first hardfloor, the Dingo. It was a runaway success, so when the time came to put pen to paper for new designs, the team figured they'd take the popular Dingo model and make it better in every way. Enter, the Dingo Ultimate.

In typical Skamper fashion, the Dingo Ultimate is very minimalistic on the outside. It’s also huge, At 5600mm from tow hitch to tail-light it’s 400mm longer than the regular Dingo, and a full metre and a half longer than the Ranger softfloor.

More space equals more storage though, with Skamper yanking the kitchen out from the rear and moving it up front to be closer to the fridge. The result is there’s now around 14 individual compartments in which you can store anything from a generator through to a small recovery kit. 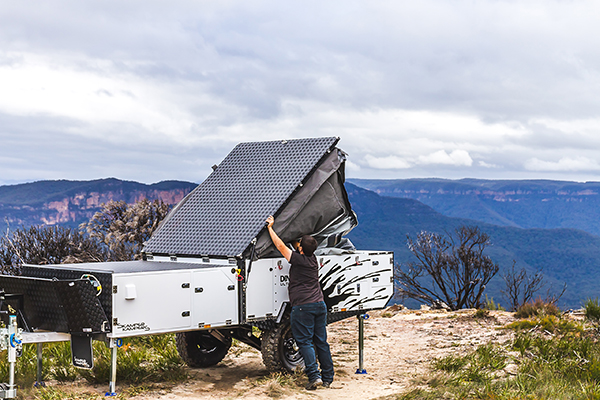 The biggest attraction is the beef-cake one-piece chassis with 100x50x4mm box running from front to back. It means there’s no potential weak points for failure or steps to get hung up on.

And despite it’s weight, the Dingo Ultimate stayed composed and effortlessly rolled its way through off-camber wheel lifts and low-range work. It also never felt too large for a quick lane change, and the 12in brakes meant it wasn’t a huge drama when some numpty would jam on the brakes in front of us.

Skamper said there may be a few tweaks before it hits the market but if this is their prototype, we reckon they’re onto a winner.

The Skamper Kampers Dingo Ultimate is priced as $25,000 + on roads and dealer delivery (introductory price).