Leaving the coast and heading inland can be a surreal experience for travellers, especially in the Top End. Watching the landscape start to parch and go from lush shades of blues and greens to that enticing shade of earthy red is a real eye-opener. This is no more apparent than on the trip inland from Cairns in Queensland along the Savannah Way. It’s around Georgetown in the Gulf region where you really leave the greenery behind and start to get a taste of real, red dirt, outback country and it’s a landscape that will leave you breathless.

The Savannah Way is an adventurous alternative to the main linking highways from Cairns in far north Queensland, right through to Broome in Western Australia. It takes in a series of sealed and unsealed roads and tracks, showcasing some of the north’s finest attractions. It’s not just one road, though – there are a whole heap of alternative routes that can be explored simply by following the signs. We decided to tackle the section from Georgetown to Boodjamulla (Lawn Hill) National Park (NP), Qld, and we found some great little campsites, and a heap of things to explore along the way.

Our first stop was the Cumberland Chimney Historical Site. This beaut little free camp is located around 21km west of Georgetown and has an interesting history of gold mining. Constructed in 1889, the chimney, a few small brick structures and some fenced off mine shafts are all that remain of the once-thriving mine and township that in its day peaked at extracting over 11,500 ounces of gold. 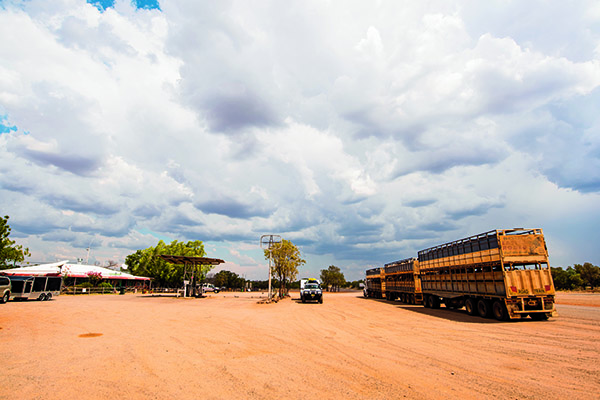 The campsite that now inhabits the area is basic, with no amenities, but is rich in flora and fauna, especially birdlife, and an education in historic Australian industry. If you love your bird watching, this place should be a must on your bucket list as the abundance and variety of species that frequent the site is first rate. Species include a variety of shrike, rainbow bee eater, stubble quail and emu, just to name a few. The picturesque, white lily-decorated dam directly beside the campsite is a popular stopover for many migrating species, so the binoculars and camera are sure to get a workout.

Much to the kids’ amusement, the ground here is covered in gold dust – albeit fool’s gold and quartz. Along with the haunting termite mounds that resemble grave stones and a few odd structures poking through the savannah grasslands, it’s a free camp that’s fun to explore and worthy of at least an overnight stay.

HEART OF THE GULF

Our next stop was the town of Normanton – some 300km west along the Gulf Developmental Road, or just down the road as the locals put it. Perched on the Norman River, this small town is in the heart of Gulf Country and is claimed to have had the biggest saltwater crocodile ever caught once residing in the river. At 8.64m-long, the monster croc was named Krys after Polish crocodile hunter Krystina Pawlowski, who shot the beast dead in 1957. A life-size statue of the dinosaur-like reptile now stands in its place in the town centre, although it’s rumoured that another almost as big has been sighted in the river as recently as 2010.

Another attraction this little neck of the woods is famous for is the Gulflander antique railway. This still-functioning diesel locomotive with passenger carriages runs scenic tours and return trips on its original route from Normanton to Croydon on a regular basis. It was originally built to connect the river port of Normanton to the goldfields of Croydon in the gold rush era and was known as the trip from nowhere to nowhere, as it was segregated from the state rail network.

There are a couple of caravan parks in Normanton – the Gulfland Motel and Caravan Park and the Normanton Tourist Park. We opted to stay in the latter which had good facilities and was walking distance to the Purple Pub. The Purple Pub is exactly as it sounds – a big purple pub – and it puts on a top pub feed with motel-style accommodation available as well.

From Normanton, we travelled south along the Burke Developmental Road and then west again along the Wills Developmental Road, but not before a quick stop at the Burke and Wills Roadhouse. Aptly named because of its location on the original route that the early explorers Burke and Wills took, the roadhouse offers a small number of powered campsites as well as an excellent feed and basic supplies to keep you topped up on your trip.

OFF THE BEATEN TRACK

Gregory Downs will be your last chance for fuel for the trip out to Lawn Hill, although fuel is available at Adels Grove campsite. Adels Grove is one of the accommodation options available for visiting Lawn Hill.

The road out slowly turns from a thin black strip of tarmac through the savannah grasslands to a red bulldust covered track into the dry plains and red sandstone ranges of Lawn Hill.

Adels Grove is located 10km from Lawn Hill Gorge and there are plenty of unpowered campsites available. Although there are no powered sites here, there are cabins and river tents available with power. There are hot showers, a restaurant, bar and a camp kitchen that also serves fish and chips of an evening.

There’s a shop that stocks basic supplies, a mechanical workshop and fuel bowser with diesel and unleaded fuel to keep you going, limited Telstra internet service and a public phone. It’s an incredibly remote part of the country, but there’s enough here to keep you sustained for an extended stay if you choose to take your time to explore the area.

Adels Grove is also pet-friendly although your four-legged family member will have to stay behind if you plan to visit the national park.

There’s plenty to do and see inside Boodjamulla (Lawn Hill) NP. But our first and foremost activity on the list was to drag the kayak into Lawn Hill Creek to explore the gorge.

The first thing you’ll notice about the water is its bright green appearance. This is due to the high concentrate of calcite and dolomite caused by limestone dissolving into the water from a chemical reaction to the rainwater. Perfectly safe for swimming, the clear green waters are ripe with several species of fish – most commonly archerfish and some rather large catfish. Fishing is off-limits in the national park, though, but you can drop a line in back at Adels Grove.

There are plenty of walking tracks to explore, taking you to the best scenic vantage points overlooking the gorge. The tracks range from easy walks that the kids will love to challenging treks that will give you a complete workout. The national park also has its own RV-friendly camping area with basic amenities including toilets and cold showers.

Exploring the Savannah Way is one of the true Aussie outback adventure drives and this section involves exploring the heart of the Gulf region as well as one of Queensland’s most scenic national parks. It’s a great alternative to sticking to the highways and you’ll see some of the best of the north along the way.

Check out the full feature in issue #98 March 2016 of Camper Trailer Australia magazine. Subscribe today for all the latest camper trailer news, reviews and travel inspiration.