Entering into the increasingly competitive luxury camper trailer market is a significant step for any manufacturer. And fine-tuning can take a bit of time.

EzyTrail’s new Vortex RX looks the part in its black and bone-white paint job but as a prototype trailer we had to judge, there were a few edges that needed smoothing, as is so often the case with such campers.

There’s no denying the styling of the Vortex borrows heavily from the attractive Pioneer Onyx featured at last year’s event. The Vortex is a little bit heavier, though, with a 1360kg Tare and 1990kg ATM, giving it a good load capacity of 630kg; the 135kg ball weight implies it’s a well-balanced camper. 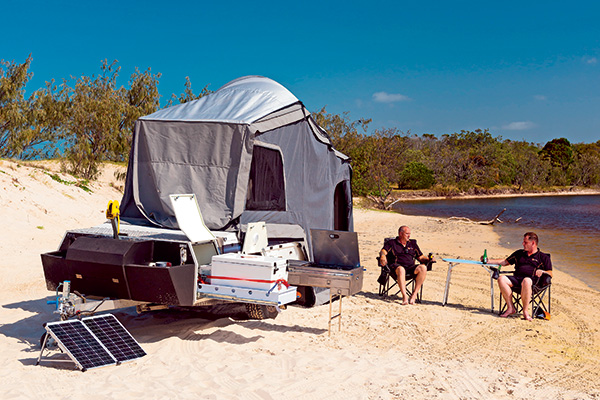 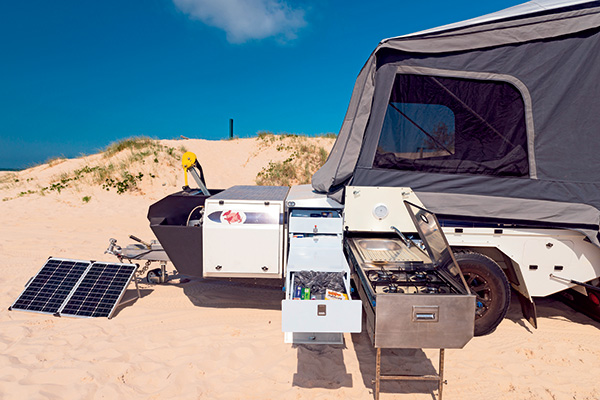 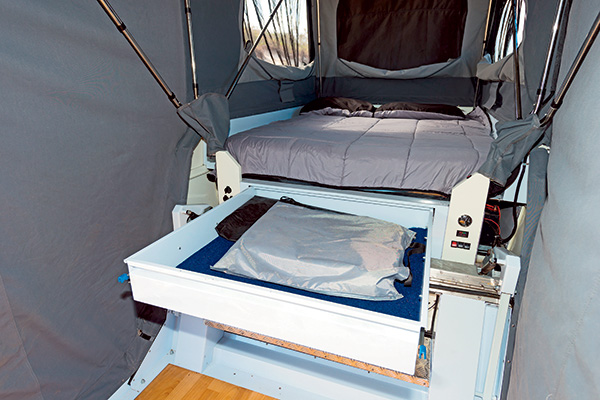 The Vortex also has a distinct price advantage, which at $32,000, is comparatively pocket-friendly for a product striving to appeal to the luxury end. It rides on a hot-dipped galvanised 100x50x4mm chassis and drawbar that’s well equipped with a McHitch 3.5 tonne-rated coupling and an Ark XO dual wheel jockey wheel.

The suspension on the Vortex is trailing arm independent with dual shocks and 12in electric brakes, with an unboltable hub and stub axle assembly and full adjustability for toe-in, toe-out and camber. The whole package rolls on black 16in 1250kg-rated alloys with a LandCruiser bolt pattern sporting 265/75R16 all terrain rubber, with the spare carried in a cradle underneath.

The rear is opened manually, using a front mounted winch, which is also used for closing. The top is clamped down by two over-centre latches on each side (though one was damaged). Gas struts control the rear floor but I felt their exposed shafts could be better protected against stones and debris to reduce the risk of damage to their seals.

When opened and set up, the Vortex presents the option for a full length awning, which you need to attach each time you establish camp. This runs from the back of the tent to the front of the tent extension which projects out over the drawbar. It is 7100x2300mm in size and shades a huge patch of real estate. The camper comes with all walls and a floor to fully enclose this area.

All the canvas, including the tent, is in 420gsm (12.4oz) plain weave fabric. A tropical roof automatically erects as the tent sets up. All the twist lock poles, as well as the internal tent bows, are in stainless steel. During setup, there are two uprights and four spreader bars which are manually inserted. We noticed a few small gaps in the canvas at the top of the tent’s front, which is unlikely to cause dust ingress in transit, but could potentially reduce thermal efficiency and let in the bugs. One of the tent bows was crimped.

I also felt the large, sturdy piano hinge on the rear door could have been better secured on the prototype with a few of the countersunk bolts being loosely secured and poorly aligned. Electrical wires needed attention and the rear floor seemed to flex with two adults walking around on it.

Electrically, the Vortex RX comes with two 100Ah AGM batteries, one each side for balance, a 10A smart charger which I felt was small given the battery capacity, with a DC-DC charger as an option. There are two 12V plugs and a dual USB plug at the foot of the bed on one side and a water tank gauge, digital volt meter and three circuit switches on the other.

The camper-queen-size bed has an innerspring mattress and there are small pockets each side of the bed head for personal items when going to sleep. There is a handy step up to the foot of the bed and a large under-bed drawer, which can be accessed from outside when the camper is closed. There was one LED strip light for the interior use.

The kitchen is all stainless steel and pulls out on slides on the passenger side but, as presented, didn’t feel finished to me. During transport the cooktop required Styrofoam to be inserted over the cast iron burners, which is impractical for long-term use out on the track. Benchtop space was limited, too, but this could easily be addressed with a fold-over extension. There were three drawers for cutlery and cooking appliances. The area was illuminated with a circular LED lamp on the inside of the fold-up side door to the kitchen storage area and there was a 12V cigarette plug here for accessories.

An electric mixer tap over the sink made the most of the 96L 304-stainless steel tank with 1.2mm aluminium checkerplate stoneguard and the Webasto diesel hot water service (HWS). The HWS also services a shower located in a small dedicated locker with privacy provided by a 1300x1500mm ensuite that fastens on to the driver’s side rear.

An additional optional feature is a 2200x1800mm kids’ room which attaches at the back of the tent.

Adjacent to the kitchen is a large pantry, with two deep storage areas and a main front drawer, though the drop-down door for this area did sit on the ground and would rapidly become scuffed and worn on the top edge. Immediately behind the kitchen is a stereo with MP3 capability for enjoying the evenings while preparing a meal.

The fridge box in front is big enough to take up to a 95L Waeco but it was only secured by an occy strap through a few holes.

At the front there was extensive useful ‘dirty storage’ capacity. Here were the two 4kg gas cylinders, the Webasto’s diesel fuel tank and capacity for three 20L jerry cans in an interference fit arrangement. Although it’s not an EzyTrail original design, it does work well, providing plenty of room for firewood, dirty levelling ramps, old boots, and other items which can regularly get quite dirty in a camp situation.

The angled front face of this dirty storage area is finished in a rubberised textured paint and forms a stoneguard.

There are further storage lockers opposite the kitchen, opening onto the driver’s side. In one of these would travel the included porta-potti.

Inside the Vortex RX we saw at Camper Trailer of the Year at Bribie Island is a good camper that, with a little loving care, could be brought out to its full potential. The basic design and broad picture are there, but a few details need to be addressed.

It would be a real boon if EzyTrail is able to offer it at $32,000 once they’re fully sorted, and with a five-year structural and 12 months canvas warranty, it’s well supported.

Check out the full feature in issue #111 of Camper Trailer Australia magazine. Subscribe today for all the latest camper trailer news, reviews and travel inspiration.