The tragic story of Burke & Wills is about an ill-fated journey crossing Australia that they could’ve survived but unfortunately didn’t.

They’d travelled over 3250km on horseback, camel and on foot, from Melbourne to the Gulf. They should have made it home to a hero’s welcome but instead, they were half a day late and that cost them their lives. Their timing couldn’t have been worse.

The entourage departed Melbourne on 20th August 1860, to huge fanfare, with 19 men, two years supplies of food, 23 horses, 6 wagons and 26 camels, a strange sight indeed. Making their way to Swan Hill then up to Menindee, taking almost two months to travel 750km. It was here that Burke split the expedition group and took seven of the ablest men, the fittest horses and camels and three months of supplies.

On the 19th of October, the smaller party departed Menindee and pushed hard to reach the Cooper. They arrived on the 11th Nov 1860 and established a depot at Camp 63. A rat plague forced the men to move further downstream to Bulla Bulla Waterhole where they made Camp LVX (65) and erected a stockade. Burke again split the expedition party and on the 16th December he, Wills, Gray and King headed for the Gulf with three months of food, six camels and a horse named Billy. They left William Brahe, Dost Mahomet, William Patton and Thomas McDonough to look after the depot. Burke ordered Brahe to wait three months for their return, however, the wiser Wills checked his whispered to Brahe to please wait four months.

The party made a real dash and reached their final northern camp, Camp 119 on 9th February 1861. Burke and Wills tried hard to reach the ocean, but the mangroves made it impossible. Running dreadfully low on supplies the Burke, Wills, Gray and King turned and headed back towards Cooper Creek. In the meantime, the wet season had kicked in, making travel even more difficult.

On the return journey, they left a camel behind, eventually shooting three camels and Billy the horse for food and buried equipment, including Wills’ survey instruments. Gray passed away at Camp 58R, and weak as they were, Wills and King spent an entire day digging a shallow grave before covering it with heavy logs. This extra day cost them as it was only days before the remaining men reached Depot Camp on 21st April, utterly exhausted.

On their return to Camp LXV, the trio were gutted to find the depot abandoned, the fire still warm. They’d missed the party by half a day. Finding the message “DIG” blazed on a tree, that is exactly what they did to find 50 pounds of flour, 50 pounds of oatmeal, 50 pounds of sugar and 30 pounds of rice and a letter from Brahe explaining that the party had given up waiting. Having spent a couple of days recuperating, the party headed southwest in the hope of making an outpost near Mount Hopeless instead of chasing Brahe. They didn’t get far though, losing their two remaining camels and leaving them without a means of carrying water.

It was towards the end of June in 1861, when the three men decided to head upstream to try and find the Yandruwandha camp, that Wills lay beneath a coolabah, unable to go any further. He insisted that Burke and King continue, and they did for another two days before Burke was too weak to keep going. He died the following morning and King stayed with his body for two days before returning to find Wills had also passed away.

King was thankful that a group of Yandruwandha looked after him and he was eventually found by a member of Alfred Howitt’s rescue party on 15th September. Howitt buried the remains of Robert O’Hara Burke and William John Wills before returning to Melbourne with King who was in a bad way. By the 1870s, Innamincka was an important customs depot collecting taxes from drovers moving cattle between Queensland and South Australia and down the Strzelecki Stock Route to Maree and Broken Hill via the Bore Track. A police camp was established in 1882 and by 1886, Innamincka had become a township with a general store and hotel. The Australian Inland Mission Nursing Home was built in 1920 and the Royal Flying Doctor set up a base here in 1928.

Severe droughts during the 1920s devasted the region and the stock routes were closed. When the early 1950s rolled around, Innamincka was a ghost town with the police station, hotel and AIM Nursing home all closed. It was during the 1970s that the town flickered back to life with oil and gas fields discovered in the area and pastoralists running prime beef cattle, Innamincka soon had a new pub and trading post. John Dick carved Burke's face into this tree in 1898, about 30 metres downstream of the Dig Tree

While many view the Expedition led by Robert O’Hara Burke to be a failure, thanks to the detailed notes and maps kept by William John Wills and the amount of country covered by rescue parties led by explorers Alfred Howitt, William Landsborough, John McKinlay and Frederick Walker helped open up Australia. The Innamincka locale may be where Burke and Wills tragically perished, but now it is a major tourist destination.

Central to this bustling hub are the Innamincka Hotel and Innamincka Trading Post. The pub offers great food and beverages and is the first stop for many, as they enjoy a cold one after a long day on the road while checking their smartphones that come alive thanks to the services of Telstra and Optus. At the Trading Post, you can pick up limited supplies, top up your fuel tanks and purchase a Desert Parks Pass which covers your camping at all the sites along the Cooper, except for the Town Common, as well as access to Coongie Lakes and Walkers Crossing Track.

Opposite the hotel and store are the new ablutions block, a welcome replacement to the old one. The other building is the historic AIM Museum and Visitor Interpretive Centre where you’ll discover how important the Inland Mission Hospital, Nursing Home and Flying Doctor base were to the township and surrounding pastoral properties. While the Town Common is a great place to camp, my preference is the Cullyamurra Waterhole. There are several sites amongst the coolabahs with drop toilets dotted throughout, otherwise, you’ll need to be self-reliant. Howitt camped here and conducted several exploratory trips before exhuming the remains of Burke and Wills. Enjoy watching the corellas and cockatoos that make homes in the hollows of the river gums, while whistling kites soar overhead. You may even catch sight of a dingo as it hunts for food and red kangaroos lying in the shade of a tree during the heat of the day. Camping on the Town Common Camping on the Cullyamurra Waterhole

A visit to the sites where Burke and Will perished, and King was found is a ‘must-do’. I always feel a sense of sadness when visiting the spot where Burke was found leaning against a coolabah, his rusting pistol still in his hand, I’ve been told I’m related somehow but have never been able to find out how. If you sit quietly on the banks of the Cooper at any of these sites, you may be amazed by the number of fish that poke their mouths up to snaffle a bug or spot a goanna enjoying a drink. The Cooper is a haven for birdlife, fish and animals, certainly enough to provide food for starving explorers. Sunset over the Cooper

Wherever you camp along the Cooper relaxation is easy or you could cast a line for a golden perch or a grunter, launch a canoe and enjoy the serenity from a different aspect or relax on a sunset cruise aboard the ‘Kingfisher’ with drinks and finger food while learning about the local history, birdlife, flora and fauna. 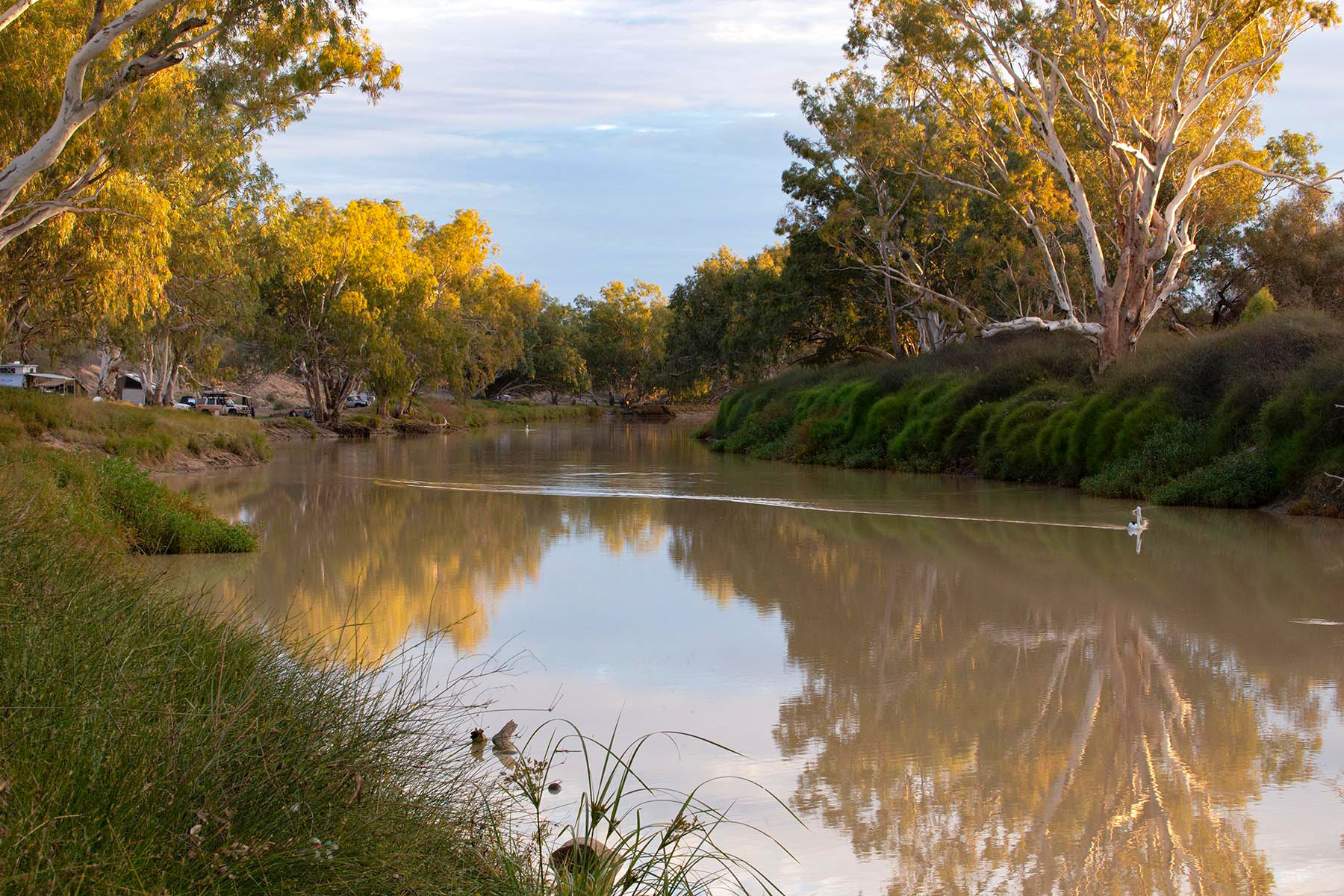 Why not take a drive out to the RAMSAR listed Coongie Lakes, a 210km return that will make it a long day or experience serene camping out there for a night or two. Because it’s an important breeding habitat for many migratory birds, motorboats, fires, fishing and generators are not permitted. However, canoeing, photography and bushwalking are more than welcome and a great way to enjoy the true wilderness.

The Dig Tree circuit trail is a great way to explore this part of the country. With stunning backdrops of mesas and jump-ups, in a land devoid of much else. The often-dry waterways are obvious, that’s the only place you’ll find trees. Don’t forget to check out the Dig Tree on Cooper Creek at Nappa Merrie a significant historical site. The tree blazes have long since grown over but now there are some suggestions that the tree, we all stand next to for photos, isn’t even the right one! The circuit trail continues along the Arrabury Road for 15km before taking a left turn at the signpost. The going is generally good as it’s also used as a bypass of the Cooper Creek when it’s in flood. You’ll pass Innamincka Bore #1 which is used to water the cattle. After 59km and a border crossing back into South Australia, you’ll reach Cordillo Downs Road. It’s only 3km back to Innamincka, crossing the Cooper Creek on your way into the township. If you haven’t been to Innamincka before, now is a great time to plan a trip out there. It is a lot more accessible than when Burke and Wills passed through here on their way to the Gulf and certainly more people than when they returned and tragically passed away. It is a favourite destination of mine so that is why I wanted to share with you what I know about the place so you can experience it too. What are you waiting for?

Getting there: Innamincka is in South Australia, 498km from Lyndhurst via the Strzelecki Track, 702km from Broken Hill via Cameron Corner and 430km from Thargomindah via the Adventure Way.

Camping & accommodation option: Camping is permitted along the Cooper Creek with plenty of places on the Town Common for $5 per night. A Desert Parks Pass is required to camp at the Cullyamurra Waterhole, Ski Beach, Policeman’s Waterhole, King’s Marker and Minkie Waterhole.

Best time to visit: From April to September as the weather is generally cooler and reduced chance of rain.

Permits: A South Australian Desert Parks Pass ($48 multi-parks 2 months or $108 multi-parks 12 months) is required to access Innamincka Regional Reserve and can be purchased online or at the Innamincka Trading Post. You can also buy a day pass the same way ($12 per day or $10 per day concession).

Navigation: Paper maps, with the Hema Maps range providing excellent coverage and some form of electronic navigation/mapping hardware/software such as CamperX or the Hema HX2 are recommended also.