The headland swell that peels off Red Bluff, WA, has magnetised west coast surfers for decades, drawn to a remote beach camp that’s a bumpy, two-hour trip north of Carnarvon. Riding the epic left-hander by day and dossing down in swags and tents overnight has long been a ritual for wave riders, but it’s Red Bluff’s invigorating seascape and rustic campsites nestled against the cliffs that are luring modern travellers to this one-in-a-million west coast surf Mecca.

After a 20-year hiatus, I finally made it back to Red Bluff to discover that this laidback spot has changed very little. The facilities are still primitive, the endless white sand beach remains utterly pristine and we still shake and rattle as we cruise north along the coastal access track. The famous ‘Bluff Barrel’ is as powerful as ever and the family-run Red Bluff Store continues to brew a mean coffee, served in its weather-beaten shack overlooking the sea.

Located on Quobba Station, at the southern edge of Ningaloo Marine Park, Red Bluff doesn’t offer much in the way of camper facilities. There’s no power or showers, water or firewood, but the allure of this back-to-basics camping experience is palpable. Looking out from our shady camp clearing, I watch a surfer as she teeters momentarily on the lip of a crystal blue wave before dropping down, carving a path to the left and shooting north out into the bay. It’s exhilarating just to watch, let along experience, and there’s an energy here that pulls me down on to the beach to expend a little myself. 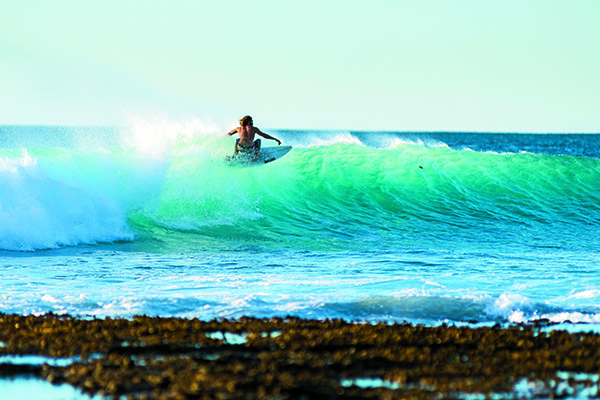 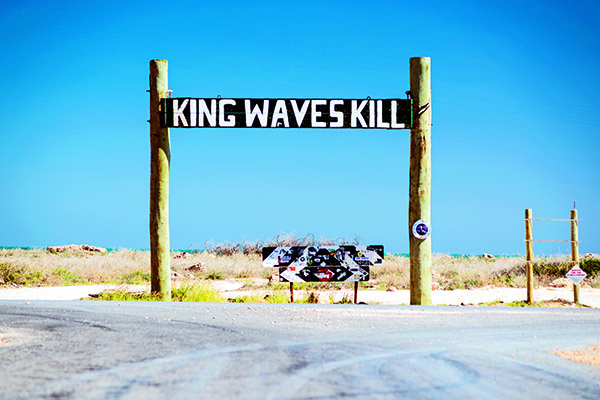 Thankfully for non-surfers, Red Bluff’s appeal stretches beyond its world-famous waves. There are coral reefs and wreck sites to dive and snorkel, great beach fishing, and the best blowholes on the west coast – all within easy reach of this remarkable wilderness camp. Accessible to 4WD vehicles with offroad caravans, camper trailers or tents, Red Bluff also rents out plush safari tents and is less than an hour’s drive from Quobba Station’s big homestead campground where conventional rigs can base themselves.

This adventure begins at the Quobba Blowholes, 74km north-west of Carnarvon where the bitumen ends and a long stretch of isolated beaches and reef-fringed shorelines begin. When the blowholes are pumping the spectacle stops travellers in their tracks: the surging ocean pummeling Quobba’s rugged cliffs and shooting skywards through narrow rock holes for up to 20m.

In these big seas, when fishing is out of the question (it’s impossible to avoid the ‘King Waves Kill’ warning as you approach the cliffs), snorkelling is the best way to explore. Just 1km south at Quobba Reserve, the steep sea cliffs drop suddenly away on to a pretty white-sand beach, and a shallow, cerulean lagoon nurtures a colourful coral garden and a thriving marine ecosystem.

Protected against the vigorous swell by an arcing rim of reef and rock, the lagoon is ideal for snorkelling and swimming, and new shade shelters installed along the beach provide a place to picnic. If time is on your side, there’s a camping area over the dunes with waterfront nooks along a kilometre of shoreline, tucked among a rambling sprawl of old beach shacks with awesome access to the sea.

The deep water that laps the cliff-fringed coastline and lures anglers also creates a pounding swell that can quickly transform into king waves, crashing unpredictably over the cliffs and sucking anglers into the sea. In good weather and calm seas, locals fish and dive south of the boat ramp, off the reef near Black Point.

Accessible to on-road rigs, this idyllic, bare-basics camp has a long history of facilitating great camping escapes but there are few facilities on offer. No drinking water is available and while there are toilets in the day-use area, campers are required to have their own toilet on board. There are bins and dump points on site, and generators and dogs on leads are permitted. Overnight camping fees are $11 for adults, $8 for seniors and pensioners, and free for kids, payable to the onsite ranger.

A sandy track hugs the coast north of Quobba Blowholes, passing a cliff top memorial, 7.5km on. This poignant spot with grand sea vistas commemorates the WWII battle that resulted in the largest loss of life in the history of the Royal Australian Navy.

On the night of November 19, 1941, RAN light cruiser HMAS Sydney II was sunk in a battle with German raider HSK Kormoran with its full complement of 645 on board. While 319 of the Kormoran’s 399 personnel survived the brief, 30-minute engagement (but were subsequently held as prisoners of war), there were no Australian survivors. The incident has fuelled much debate that centred around one unanswered question: how could a modified merchant vessel like the Kormoran defeat the purpose-built warship Sydney? After decades of searching, the wrecks of both ships were finally located off Shark Bay in 2008.

Just 2km up the track you’ll reach Quobba Station homestead, the headquarters of a sheep property that covers 75,000ha with 80km of spectacular shoreline. Tourism has long been part of the pastoral mix for the station leaseholders, the Meecham family, who were no doubt spurred to build facilities at Red Bluff to cater for mad-keen surfers, anglers and solitude seekers.

A sandy track hugs the coast north of Quobba Blowholes, passing a cliff top memorial, 7.5km on. This poignant spot with grand sea vistas commemorates the WWII battle that resulted in the largest loss of life in the history of the Royal Australian Navy.

The road between the homestead and Red Bluff veers inland across the plains, pulling you away from an amazing coastal strip until you’ve cleared Rio Tinto’s mine haul roads. The track is reputedly graded during the peak winter travel season, but we found the corrugations too shaky for conversation as we neared the turnoff to Red Bluff. If you intend to take a camper to Red Bluff, stop at the homestead or phone ahead to inquire about road conditions before heading out.

It takes about an hour to travel the 54km from the homestead to Red Bluff campground, where sites are carved into a grassy hillside that drops gently to the beach. Stretching seaward at the south of the bay, Red Bluff’s flattop finger of rock interrupts the swell that peels off its point and curls and rolls over a reef break to form what website wannasurf.com calls a ‘totally epic’ wave.

You can follow the board riders along a rocky goat track that leads to the very end of the bluff to watch them take on the Bluff Barrel or simply to enjoy the views from this invigorating spot. It’s also a lovely place to watch an Indian Ocean sunset, but pack a torch if you linger late. Back below camp, where a wide, white sand beach meets the turquoise sea, you can explore from the sea caves at the southern end, all the way north. Follow the arcing rim of sand and rock as far as you can, stopping to swim wherever the waves calm off.

Along the way, you might spot the humpback whales that cruise close to shore on their northern migration in June, returning south with their newly born calves from about September, bound for Antarctic waters. On beaches to the north, loggerhead turtles come ashore to lay their eggs over the summer months from October to May. Neighbouring Gnaraloo Station works closely with Department of Parks and Wildlife rangers to safeguard the Gnaraloo Bay Rookery, which rates as the loggerhead’s largest, confirmed nesting rookery in mainland WA. If your adventure leads you here, you can volunteer to assist with research programs during your stay.

While facilities at Red Bluff are undoubtedly basic, the spacious campsites nestled up the cliff are positioned in lovely, private nooks, some shaded and each with a fire pit. All offer incredible ocean views and there are 15 drop toilets housed in little thatched humpies dotted around the camping area, so it’s never a long trip to the loo. That’s pretty much the extent of facilities, unless you splurge on one of the canvas-tented bungalows that come with access to a shared kitchen area.

Firewood is available from the camp office but you’ll need to bring plenty of water for drinking and washing. The one thing you can get on site is a great coffee and an easy meal, thanks to Monique and Reid Durant, who have been satisfying appetites at Red Bluff for 20 years. Their mango milkshakes and Saturday night pizzas are legendary, and there are few places as tranquil as the store’s ocean-view deck to enjoy a caffeine fix.

The pair bought Red Bluff Store back in 1995 after a few years spent migrating between the equally magnetic Margaret River and Red Bluff. They went on to transform the tiny timber store into a stellar little cafe and built a completely self-sufficient home while raising their ever-growing family of eight kids. Now aged between eight and 22 years, six of the Durant kids still live at Red Bluff and the two who have left come back regularly to surf the barrel.

Along with groceries and hot snacks, Red Bluff Store sells Monique’s fabulous beach-inspired jewellery and I still find it amazing that you can get a great coffee so far off the grid.

To reach Red Bluff, turn off the North West Coastal Highway 24km north of Carnarvon and continue for 50km to the Blowholes. Turn north and follow the coast for 9.5km to Quobba Station’s homestead campground, and continue another 54km to Red Bluff.

Time your trip to catch the Carnarvon TropiCool Festival (late May) or Gascoyne Food Festival (mid-August).