Behind the Brand: ZONE RV

ZONE RV make more than campers; they can project manage your dream 4x4 build, from the ground up.

ZONE RV’s Matt Johns towed the Expedition Series Z-12.0 in on a LC79 dual cab that had been decked to the gills with all sorts of accessories. The beast is what’s called an ZUEV, short for ‘Zone Ultimate Expedition Vehicle’, which is basically a 4WD of your choice that ZONE RV have fitted out to be the ultimate touring whip.

On Matt’s ZUEV, there’s an Offroad Animal Bull Bar up front. Cradled within this is a 1,700lb Sherpa 4x4 winch. On the bar there’s an aerial for the GME UHF installed in the cab (which you can use comfortably in the enhanced bucket seats). Within the bar there’s light bars and then again, across the front of the roof rack, a 50” light bar.

The tyres are BF Goodrich A/Ts supported by ARB Old Man Emu Suspension. This raises the GVM some 600kg to 3,950kg, while also offering a 2” lift. The rear of the vehicle has helper airbags so you can adjust to the load you’re carrying. Under the hood there’s been an ECU remap, and at the back there’s a DPF Legendex exhaust. 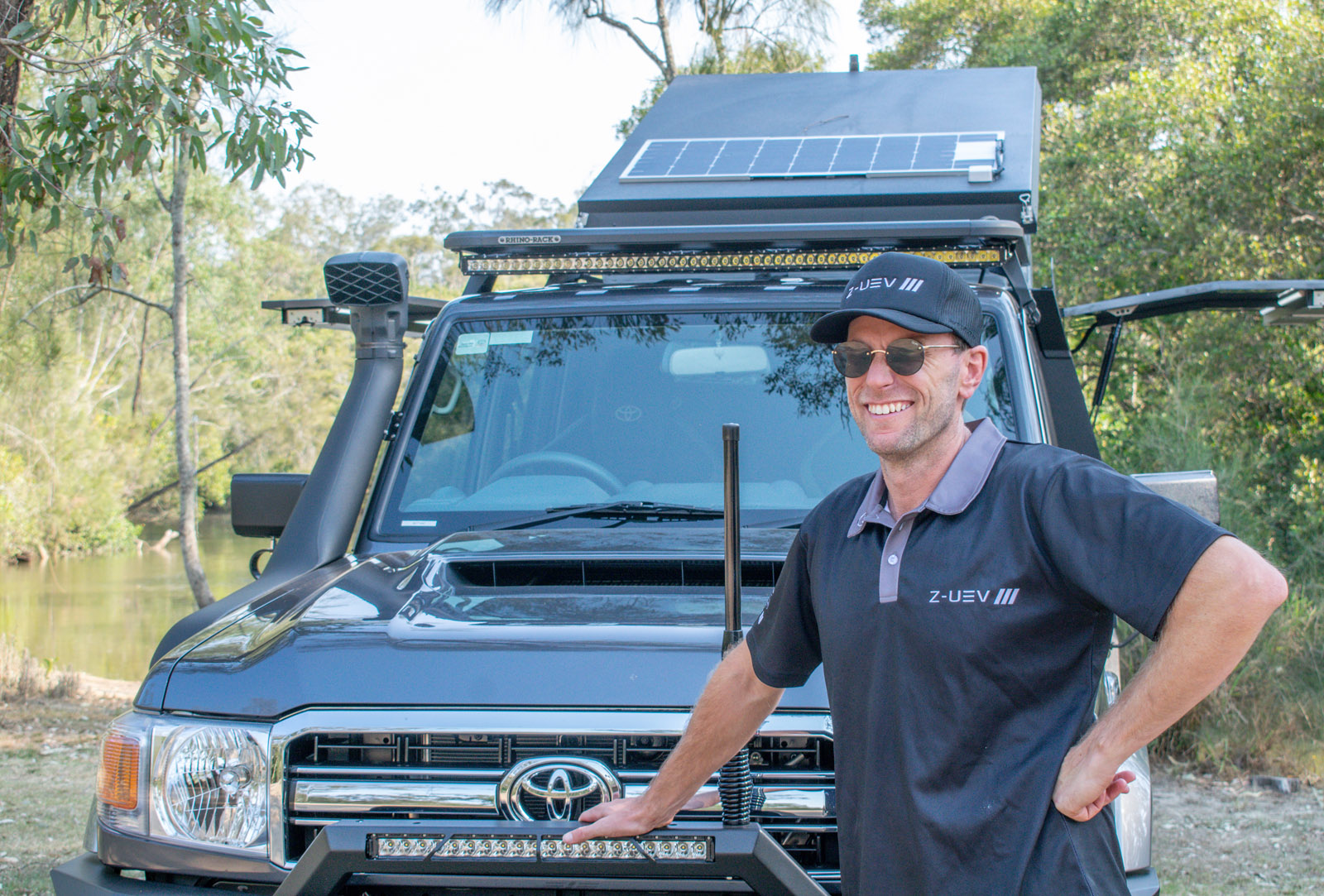 The roof of the ute is fitted with a Rhino Rack platform rack, while the back is equipped with a canopy. This canopy isn’t attached to the tray; it’s chassis mounted. It’s Zone’s own, made of full fibreglass sandwich panel.

“Light weight is one of the main benefits of our canopies,” Matt says. “Also insulation; the extruded foam core keeps everything cooler. In aluminium canopies, the fridge has to work harder, the battery doesn’t last as long.

“Aluminium can also have issues with corner cracking, where sections of alloy connect. Our canopies are fully moulded, eliminating any chance of cracking.”

Behind the wheel arches on both sides there’s tool boxes, ideal for recovery gear. Inside, the canopy is modular; you can build it how you like. Some of the storage is in lightweight, portable Expedition 134 tubs. There’s also a lot of shelving, including a 40L evaKool drawer fridge. Nearby a prep bench slides out, with an induction cooktop.

The canopy features a 2000W Enerdrive inverter and 200Ah lithium battery capacity. 240V charging of these is optional, otherwise it’s alternator and solar charging off the 110W fixed panel. There’s plenty of outlets and 12V. Underneath there’s an 80L fresh water tank which feeds a plumbed sink; pumps and HWS are optional.

All of the canopy’s doors have central locking off the car keys. The spare tyre is carried on its rear instead of underneath to leave room for a long range fuel tank. There’s a reversing camera to make up for the hindered rear view visibility.

Up top, there’s a rooftop tent — the same as the Z-12.0 camper’s mezzanine bed. It clamps open with sides made of 8oz Aussie canvas, and the ladder comes down at the back to lead you up to a 100mm density foam mattress. The whole thing weighs just 30kg.

“While modifying a 4WD can be done by the individual, they have to talk to 20 people if they go down that path,” Matt explains. “We bring it all together and do it for them. We project manage for the customer.”

“The thing with the ZUEV, is that is can be any vehicle,” Matt says. “We’re doing Ford Rangers, a RAM 1500. Each ZUEV is fully customisable.”