The Story of Complete Campsite

The manufacturing of camper trailers seemed like a goldmine opportunity in the early 2000s. It was as though these simple portable campsites had just been invented – despite the fact they’d been around for several decades – and everyone wanted one.

That’s when a young car salesman and his bank-employee wife decided they’d chuck in everything they knew and buy into the lifestyle. That was 14 years and a lifetime ago.

Complete Campsite, the little regional company they bought, has gone on to become one of the major players in the business with a quality range of trailers thanks to high standards, sharp business acumen and a sense of drive that has built up the high regard of everyone else in the industry, and turned their company into an employer of 38 people. 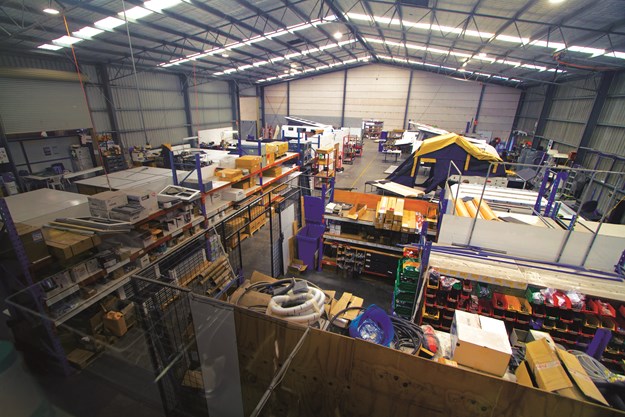 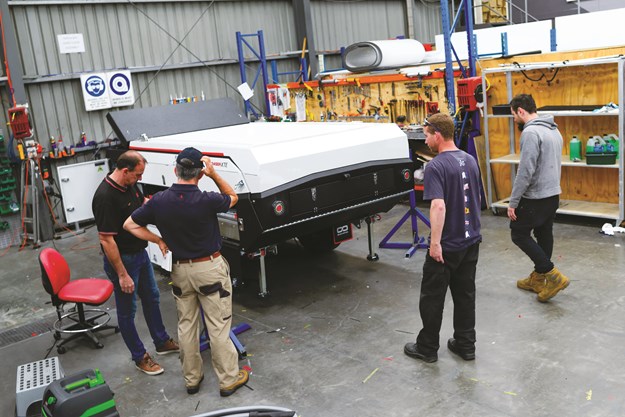 The business had been running since 1992, after being started by Mark and Michelle Cole. Come 2004, Complete Campsite was a small-time manufacturer of camper trailers, selling a few each year, but mostly focused on tours and rentals.

Two of its regular customers were Jodie and Grant, who enjoyed their camping and had discovered the benefits of towing their accommodation rather than jamming it all into the boot.

They liked what they saw so much that they would volunteer their time on tours and on weekends to help out at the factory, near Gosford, on the NSW Central Coast.

One day in 2004 they were picking up a camper for a trip when Mark Cole casually mentioned that he and his wife were thinking of selling the business and doing what their customers did: touring Australia.

“Jodie and I looked at each other and thought: here’s a career change, something different,” Grant recalls.

That this would involve a very hands-on adaptation to a whole new way of life didn’t seem to faze the couple.

“I was much younger then and willing to learn,” says Grant. “I’d been in on weekends and helped them build campers and I’d found it fun and interesting.”

“When we took over there was a welder, a sewer, Jodie and myself. I learned to weld, to do electrics, to paint, fit tents, bend bows.”

Today the business occupies a sprawling 4000sqm factory at Lisarow, on the bushy outer fringes of the Central Coast's urban sprawl.

There, all the campers are built using every Australian resource they can access, other than the fibre-glassing for the Exodus hybrid range, which is done at a yacht builder’s near Newcastle, a bit further up the coast.

The business has been there for seven years and, as Grant assured us, “We’re not moving again.”

The company has a lot of long-term staff. Many have been there for over five years, and a handful have stayed with the company for over 10 years.

“In 2010 we purchased the Exodus brand of campers to expand our range, and a few months after that we began developing our hard-floor campers,” Grant said.

“In 2009, for the first Camper Trailer of the Year, we built up an upmarket soft-floor camper that was priced at $38,000 and everyone thought we were mad, but it had everything that we could think of in it, and it won its category and the Best of the Best award back then.”

Complete Campsite has come a long way from its beginnings. With its top-of-the-line Exodus 16 now priced at over $100,000, it’s a long way from where the Joyces first thought it was going to take them.

“Initially we bought the company with a lifestyle image in mind,” says Jodie.

“We thought we’d be able to engage in touring and camping, but it grew so quickly that it left us little time for that.”

“We always knew that we wanted to manufacture a premium, comfortable camper trailer, which at the time the market didn’t have.”

“We could see that camper trailers could be much more comfortable, more self-sustainable,” Grant chimed in.

“From the camping that Jodie and I used to do, and after using the hire campers that Mark and Michelle used to have, we knew what we would have liked and I think that’s where we started to develop and build campers.”

“Early on customers used to ask us, ‘Can you do this?’ ‘Can you do that?’ Mark’s answer was always, ‘No, we only do what you see,’ but we took a different approach. We had the attitude that ‘Yep, we can do that,’ and then we’d come back here and ask ourselves ‘How do we make that happen?’”

Much of what you see in a Complete Campsite camper is customer-driven, as well as from the experiences of the Joyces' who regularly go travelling in their campers.

“We have thousands of customers out there now,” Grant says. “And we have our camp-outs every year where we get as many of our customers together as we can, and at those gatherings we sit around the campfire and talk about this mod or that. A lot of their ideas you feel won’t work, but they can push the trigger on a particular style or concept of a good idea.”

IS A COMPLETE CAMPSITE CAMPER RIGHT FOR ME?

Or is it more suited to others? Who is it that these campers suit?

“Gosh, we’ve asked ourselves that a lot,” says Grant.

“We have so many families with two or three kids that have bought the hybrids – we’ve put bunks in them for them – and then we have 80-year-olds who have bought rear-folds because they just love the canvas and they don’t want to go to a hybrid. So anyone between their mid-30s and 80 is a potential customer.”

“These are people who have the equity in their house and the income to afford it and support it,” added Jodie.

“We recently sold a camper to a young family who have two kids, two and four years old. You don’t really expect someone at that stage of their life to be spending $120,000 on a camper trailer, plus the $100,000 rig they’re towing it with, and they’re taking 12 months off and travelling around Australia.”

Since 2004 the biggest change that Grant and Jodie have seen is the explosion of imported campers. They don’t have a forward fold design for the reason it would be too hard to compete cost-wise with them.

However, Compete Camspite proudly promotes the fact that everything they do is Australian made.

“In some ways it would be so much simpler and financially better to get things done offshore, but we don’t want to give up that Australian-made tag,” Jodie adds.

“We just don’t think the quality would stay there,” Grant agrees. “We’ve seen some people move some of their build processes offshore and then a couple of years later bring them back onshore because they just couldn’t get the quality. You soon see the comments on the forums.”

Winning that Best of the Best award at Camper Trailer of the Year in 2009 still ranks as a highlight for Grant.

The string of four years where the company won its category and in 2014 entered three classes in the contest and won all three are standouts for Jodie.

“Just being recognised for all your efforts is always good. We won Manufacturer of the Year a couple of times. Those times always stand out,” says Jodie.

Grant added that, “one of the big buzzes we get is when we see photos and videos from customers of them out there with their campers.”

“You see your camper out in some extreme location, with kids running around living the dream, and you feel pride that you’ve built that for these people and they’re getting to see places in Australia that so many people won’t ever get to.”

Complete Campsite as a business is now much larger than Grant and Jodie ever thought it could be back in 2004.

At one stage, back in 2013, it had grown to around 50 employees and it had become “a little unmanageable”.

That was when Grant and Jodie decided to cut back on the numbers of campers being produced and to bring the company back into a manageable position.

“The quality of our campers did drop off a little, which was a concern,” admits Grant, “and we made the decision to get back to basics and improve on quality and get our good name back.”

The company lists 25 service outlets around the country but, as Grant says, if a customer has a problem any qualified workshop can become an approved repairer after a discussion with the head office, because you simply can’t have listed agencies in every town in the nation.

Grant and Jodie have development plans for the future, but they’re keeping them under wraps for now. They would tell me that they're going to keep growing and diversifying and, at a time when the industry has been shaken by a couple of high profile closures, Complete Campsite is in a good position to continue to set the standard for high-quality, Australian-made campers.