I’ve got a little confession to make. As much as I love hardcore wheeling, I’m definitely a big fan of the lazier side of camping, and by that I mean I’m pretty sure I’m a 60-year-old trapped inside the body of a man in his mid-twenties.

Yep, it’s the traditional stuff that really gets me revving. It’s things like trying your hand at making a traditional style of billy tea, it’s fishing with nothing more than a few lengths of handline and a lure made out of aluminium foil and it’s cooking bacon and eggs straight over the coals. And there’s really no better place to indulge these luxuries than with a sneaky run along the Turon River! After all, it’s not every day you get to camp alongside one of the most pristine rivers in the country.

Now, being a bit of a grandpa at heart, this place is by no means what I would call a hardcore location. In fact, the only time I needed low range was for a little extra grunt to pull the camper up the hills, and to claw my way up a few of the steeper river exits. 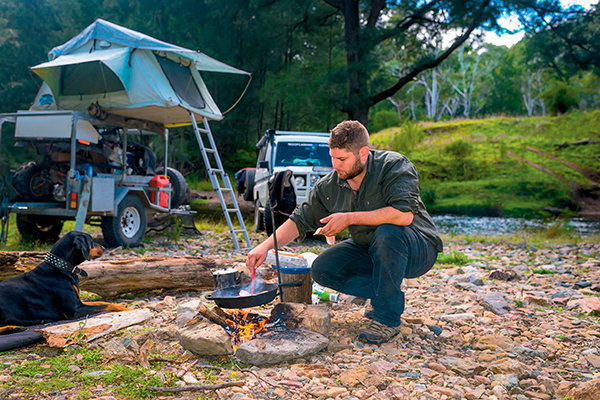 But when it comes to pure old fashioned relaxation, this region is definitely a massive hit. It’s the type of place you can slow it all down and really take the time you need to get back to basics, unwind and de-stress — just the way the grandpa in me likes it, eh?

If you do head into Turon NP, you can choose from a whole swag of designated campsites. The most popular being Woolshed Flat and The Diggings, which are both right on the Turon River. This river comes alive with bass, with locals boasting of some great catches this year as well. It’s a good idea to bring plenty of firewood, because if you are out here during winter it gets cold, I’m talking the olive-oil-getting-frozen-solid in the jar kind of cold. So rug up, and bring plenty of blankets. The positive side to the cold climate is you get to build a cracking campfire to doze off by — talk about relaxing!

Turon National Park is Wiradjuri country, and as you might have guessed makes it home to several sacred sites that bore witness to the land’s earliest occupiers. When it comes to discovering gold, way back to 1851 an Aboriginal prospector found a large gold nugget in the river. A few more finds later and hey presto the nearby town of Sofala was developed heralding the start of the gold rush days. There are plenty of relics linked to the early gold mining days still present in the park, and modern day fossickers have been known to do pretty good every now and then as well.

Now I’ve checked out a large chunk of Turon NP in the past. So, I thought it was about time we explored the tracks less travelled, which meant heading west towards Sofala. There is plenty of loose shale and gradual inclines that seem to get steeper and steeper as you go, but it’s all camper trailer friendly stuff. A few clicks down the road and we met back up with the river, and with tracks darting off left, right and centre I just couldn’t help myself; I just had to lock in the hubs and get into it. The tracks crisscross their way from one side of the river to the other, and I’ll tell you what, there’s nothing quite like getting your 4WD’s feet wet!

A good 20 minute run down the river and we come across an absolute gem of a campsite. It was the point where the river opens up larger than any other spot we’ve seen so far. Now like most of the river bank this side of the river, the bank was littered with rugged rocks, so it wasn’t exactly swag, tent or softfloor-camper friendly. But for my rooftop camper setup it was absolutely perfect.

If you choose to stay on Turon Gates Road, you’ll end up at Turon Gates itself, which is a great little farm stay. With clean showers and toilets, a prime riverfront location and plenty of space for camping it’s the perfect place to unhook the camper and let the kids burn off some energy. There are walking and bicycle tracks, great fishing, horse rides and a bunch of funky animals to keep the youngsters occupied. Plus, if you’re after a bit more luxury there are also a bunch of cabins available for hire as well.

Camper trailer camping in the Turon NP is available at the Woolshed Flat and The Diggings campgrounds. Phone (02) 4787 8877 or visit www.nationalparks.nsw.gov.au for more information.

Turon Gates is 12km on Turon Road, via the Highway. Avoid using GPS and refer to the website for directions. Phone (02) 9969 3818 or visit turongates.com for bookings and information.

Check out the full feature in issue #90 July 2015 of Camper Trailer Australia magazine.